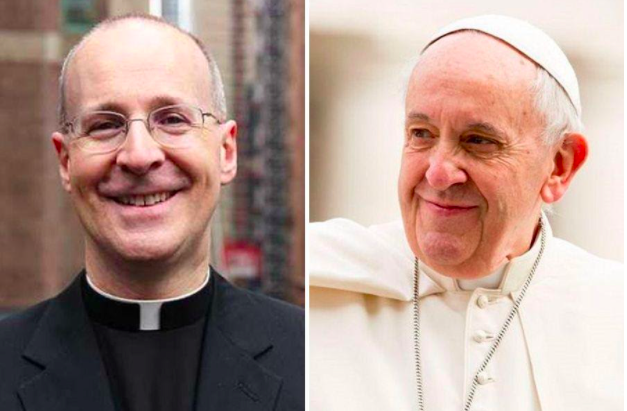 A picture tells  100 times better the central idea than drab page of WORDS! You all know what a wide sprctrum of  ideas are compressed in  the now famous word “LBGTQ’,  ever since Francis expressed his heart-felt concern on board a plane: “Who am I to judge if lesbians in the Vatican prays to God for Light and Mercy!

Pope Francis has said  and says many things – on God, heaven, hell, sin —   to many people, — his atheist friend, Christians, Politicians, his critics, the poor and wounded. The name of his God is MERCY,not any Christian name. More than the  head of the Catholic Church, he is the spiritual Head  and a Servant (Servant of servants) dying to do foot-washing ministry to the last, least and lost, calling himself a SINNER.

His last encyclical “Fratelli Tutti” is his vision of life. LIFE itself is the greatest gift all of us humans  (families) have received and it must be transmitted dutifully by couples, not individuals, because “man is not complete without woman and woman, not complete without man, each without the other is only a piece of humanity, incomplete!”

The basic human unit hence is the FAMILY where humane humanity is recreated in loving sexual embrace, to be taken over or handed over as in an uninterrupted relay race. This basic human unit is sometimes replaced by a community of males or females (Homosexuals or Lesbians) who are to be treated with utmost human respect.

We have already written at length about corrupt religious politics, about hymalayan iceberg ‘Clergy-sex’ crashing against the TITANIC called the CHURCH  and even good  persons like German Cardinal Marx  resigning in desperation. Pope himself has said many times about resigning and making episcopal offices for a fixed time only to be implemented.

So let us wait for more radical reforms to come both in religion and politics for the emergence of greater unity and peace in the world. james kottoor(Chicago) editor ccv.

VATICAN CITY — In a personal letter sent to Jesuit Fr. James Martin dated June 21, Pope Francis expressed support for his controversial ministry and encouraged him to “continue this way.”

The letter, handwritten in Spanish, was a note of thanks for pictures Fr. Martin had sent to the pope, and was first reported in Italian by Vatican News before being shared by Fr. Martin on his Twitter account; Fr. Martin included an unofficial translation of the letter into English.

According to Fr. Martin‘s Twitter account, “the photos that he [Pope Francis] mentions are of my nephew’s Confirmation Mass last weekend.  He [Fr. Martin’s nephew] also wore socks with Francis’s image on them.”

The Pope thanked Fr. Martin for the letter, and said that the picture of the socks “made me laugh.”However, Pope Francis dedicated most of his letter to Fr. Martin’s postscript. In his Twitter account, the author of “Building a Bridge” explained that “the ‘PS’ (PD in Spanish) that the Pope refers to was a reminder about the LGBTQ Catholic Ministry conference,” which took place on Saturday, June 26.

“I want to thank you for your pastoral zeal and your ability to be close to people, with the closeness that Jesus had, and which reflects the closeness of God,” Pope Francis wrote in his personal letter. “God’s ‘style’ has three elements: closeness, compassion and tenderness. This is how he comes closer to each one of us,” the Pope also said.

The pontiff added: “Thinking about your pastoral work, I see that you are continually seeking to imitate this style of God. You are a priest for all, just as God is a Father for all.”  In place of the word “all,” Pope Francis used the unusual “todos y todas,” male and female pronouns that are repetitive in Spanish language, unless he meant to make a gender-inclusive point.

Fr. Martin translated the phrase as “men and women” in his English version of the letter, which he claims “was prepared by several people, including an Argentine friend.”

In his letter, Pope Francis continued: “I pray for you to continue this way, being close, compassionate and with great tenderness.” "And I pray for your faithful, your ‘flock’ and all those whom the Lord places in your care, so that you protect them, and make them grow in the Love of Our Lord Jesus Christ,” he wrote.

“…[M]ay the Holy Father‘s warm message encourage and inspire all those in the church who minister to LGBTQ Catholics and, moreover, remind LGBTQ people everywhere in the world of God’s ‘closeness, compassion and tenderness,’” Father Martin stated in a Facebook post on Sunday.

Father Martin’s ministry has become increasingly controversial because of his incremental departure from Catholic doctrine.

In 2017, after he published Building a Bridge: How the Catholic Church and the LGBT Community can Enter into a Relationship of Respect, Compassion, and Sensitivity, Fr. Martin claimed in a Washington Post article that “as I was writing the book, I knew that it would be a somewhat controversial topic, even though I was careful to stay well within the bounds of Church teaching.”

“My reflections, which can be summarized as a call for respect on both sides, were based on the gospel, and on the Catechism’s call for the Church to treat ‘homosexual persons’ with ‘respect, compassion and sensitivity,’” he wrote.

However, on May 30 of this year, commenting on the Catholic wedding of British prime minister Boris Johnson, Fr. Martin lamented that same-sex couples could not have access to the sacrament of marriage. Regarding the marriage in the Church of the twice-divorced Johnson to his girlfriend who was pregnant with their child, Martin wished “that the same mercy and compassion that was offered” to Johnson and his bride, “recognizing their complex lives, could also be extended to same-sex couples who are lifelong Catholics.”

The LGBTQ Outreach conference Fr. Martin mentioned to Pope Francis was organized by New Ways Ministries, which has been explicitly declared as a non-Catholic ministry by the U.S. bishops.

The event featured New Ways Ministries co-founder Sr. Jeannine Gramick as the keynote speaker, and featured the documentary Building a Bridge which portrays Fr. Martin as a groundbreaking pastoral hero. The documentary was presented at the Tribeca Film Festival (June 9-20.) Oscar-winning director Martin Scorsese is listed as an executive producer of the documentary.