Lent is a time of pruning and reconciliation, Pope Francis says 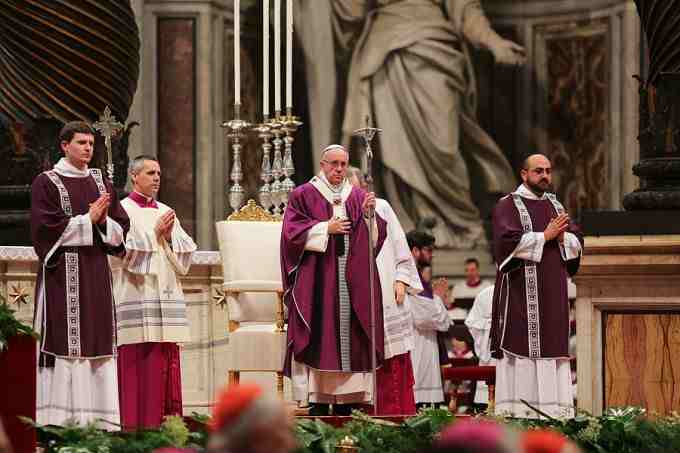 By Elise HarrisVatican City, Feb 10, 2016 / 10:24 am (CNA/EWTN News).- In his Ash Wednesday homily, Pope Francis said that Lent is the perfect time to let go of selfish and indifferent attitudes, returning to God with the help of prayer, penance and acts of charity.

“Lent is a beneficial time of pruning from falsity, from worldliness, from indifference: to not think that everything is ok if I am ok; to understand that what counts is not approval, the pursuit of success or consensus, but purity of heart and life,” the Pope said Feb. 10.

It’s a time to rediscover one’s Christian identity, “which is love that serves, not selfishness that uses,” he said.

Pope Francis celebrated Ash Wednesday Mass in St. Peter’s Basilica alongside the Missionaries of Mercy, who concelebrated with the Pope and received their official mandate from him during the ceremony.

A novelty of the Pope's Jubilee of Mercy, the priests will be sent out to dioceses around the world as special ambassadors of mercy during the Holy Year. Although there are more than 1,000 missionaries from all five continents, only 700 made it to Rome for the official mandate.

In addition to their increased availability for hearing confessions, they have also been given faculties to forgive sins otherwise reserved to the Holy See.

Though there are several such sins, the Holy See has clarified that the faculties of the Missionaries of Mercy are “limited exclusively” to just four.

Namely, they are: profaning the Eucharistic species by taking them away or keeping them for a sacrilegious purpose; the use of physical force against the Roman Pontiff; the absolution of an accomplice in a sin against the Sixth Commandment (“thou shall not commit adultery”) and a direct violation against the sacramental seal by a confessor.

In his homily, Pope Francis focused on two “invitations” extended in the day’s scripture passages. The first, he said, comes from Saint Paul in the second reading.

When Paul tells his readers to “be reconciled to God” in his Second Letter to the Corinthians, he’s not just giving a piece of good, fatherly advice or making a suggestion, but is offering “a true and genuine petition in the name of Christ,” the Pope said.

The reason for such a “solemn and heartfelt appeal” is because Christ knows how fragile we are as sinners, Francis observed.

“(Christ) knows the weakness of our heart; he sees the wound of evil we have committed and suffered; he knows how much we need forgiveness, he knows that we need to feel loved in order to do good.”

Francis stressed that we are not capable of doing good on our own, which is why St. Paul doesn’t tell us to do just anything, “but to be reconciled by God, (because) he overcomes sin and raises us from our miseries, if we entrust them to him.”

However, he warned that certain obstacles frequently get in the way, such as the temptation to lock the doors of our heart, to give into feelings of shame, and to distance ourselves from the door by wallowing in our own misery.

Francis then addressed the Missionaries of Mercy directly, telling them that their mandate is to be a sign and instrument of God’s forgiveness.

He prayed that they would help people to open the doors of their hearts, to overcome shame and encourage them not to run from the light offered by God.

“May your hands bless and lift brothers and sisters with paternity; that through you the gaze and the hands of the Father will rest on his children and heal their wounds!” he prayed.

A second “invitation” the Pope highlighted was the Prophet Joel’s instruction to “Return to me with all your heart” in the day’s first reading.

It’s easy to see this if we stop to think about how we struggle to really trust in God without fear, how hard is for us to love others without thinking badly about them, and how easily we are “seduced” by material things that leave us poor in the end, Pope Francis said.

However, he noted that alongside this story of sin, “Jesus opened a history of salvation.”

Turning to the day’s Gospel reading from Matthew, the Pope said it invites us to become “protagonists” in our own conversion by embracing the “three remedies, three medicines,” of prayer, charity and fasting and penance, “which heal from sin.”

Pope Francis concluded his homily by emphasizing that returning to God with one’s entire heart is not something external, but instead comes “from the depth of ourselves.”

“Jesus calls us to live prayer, charity and penance with coherence and authenticity, overcoming hypocrisy,” he said, and prayed that the entire Church would walk together on the Lenten path, receiving the ashes and keeping their gazed “fixed on the Crucified.”

“He, loving us, invites us to be reconciled with God and to return to him, in order to return to ourselves,” Francis said.