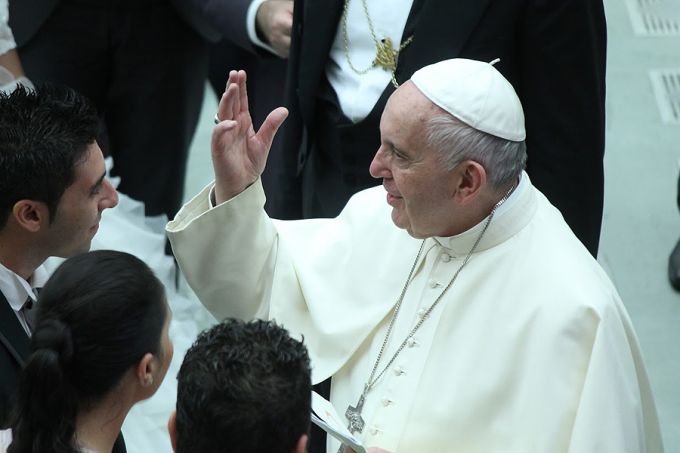 The Pope emphasised this during his morning homily in St. Martha’s House, saying we must recognise ourselves as sinners. Pride prevents true encounter with the Lord.

Our ability to recognise ourselves as sinners opens us to the astonishment of the encounter with Jesus. Without any calculations and without pride: only this way can a person have a true encounter with the Lord. This was the crux of the pope’s message at this morning’s mass in St. Martha’s House, Vatican Radio reports.

Pope Francis’ homily focused on the day’s Gospel reading which tells the story of the miraculous catch of fish. After working throughout the night without catching anything, Peter, trusting in Jesus, cast his nets into the sea. The Holy Father used this story to speak about faith as an encounter with the Lord. First of all, he said, it pleases me to consider the fact that Jesus spent the greater part of His time in the street, with the people; then, later in evening, He went away by Himself to pray – but He encountered the people, He sought the people.

“The Gospel uses the same word for these people, for the people, for the Apostles, for Peter: they were ‘astonished.’ ‘Astonishment, in fact, seized him, and all those with him.’ When this feeling of astonishment comes… And the people heard Jesus and what He said and felt this astonishment: ‘But this one speaks with authority. A man has never spoken with this [authority].’ Another group that encounters Jesus did not allow this astonishment to enter into their hearts. The doctors of the law heard Jesus, they made their calculations: “Well, he is intelligent, he is a man who says true things, but we do not agree with these things, no!’ They made their calculations, they kept their distance.”

The demons themselves, the Pope said, confessed – that is, they proclaimed – that Jesus was the “Son of God,” but like the doctors of the law and the wicked Pharisees, “they did not have the capacity for astonishment, they were closed up in their sufficiency, in their pride.” Peter recognized that Jesus is the Messiah, but confesses that he himself is a sinner: “The demons arrive to tell the truth about Him, but say nothing about themselves. They cannot: their pride is so great it prevents them from saying it. The doctors of the law say: ‘But this is an intelligent man, a capable rabbi, he does miracles, eh!’ But they do not say: ‘We are proud, we are not sufficient, we are sinners. The inability to recognize ourselves as sinners keeps us far away from the true confession of Jesus Christ. And this is the difference.”

It is the difference between the humility of the publican who recognizes that he is a sinner and the pride of the Pharisee who speaks well of himself: This ability to say that we are sinners opens us to the astonishment of the encounter with Jesus Christ, the true encounter. Even in our parishes, in our societies, even among consecrated persons: How many people are capable of saying that Jesus is the Lord? So many! But how difficult it is to say sincerely: ‘I am a sinner.’ It’s easier to say it of others, eh? When one is gossiping, eh? ‘This, that, the other thing…’ We’re all doctors in that, aren’t we? To come to a true encounter with Christ the two-fold confession is necessary: ‘You are the Son of God, and I am a sinner’ – but not theoretically: ‘[I am a sinner] because of this, because of this, because of this, and because of this.’”

Peter, the Pope emphasized, then forgot the astonishment at the encounter and denied the Lord. But since “he was humble, he was permitted to encounter the Lord, and when their eyes met, he wept, he returned to the confession, ‘I am a sinner.’” Pope Francis concluded, “May the Lord grant us the grace to encounter Him, but also to allow ourselves to encounter Him. May He grant us the grace, which is so beautiful, of this astonishment at the encounter. And may He give us the grace of having in our life the two-fold confession: ‘You are the Son of living God; I believe it. And I am a sinner; I believe it.”