The Homeless Jesus comes to the Vatican 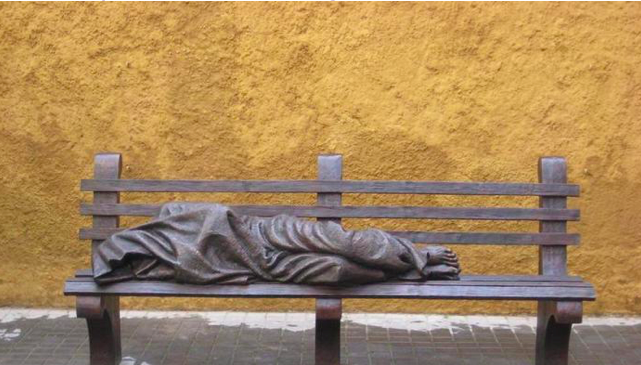 From Peripheries he comes as outcast

A life-size sculpture of the Nazarene, depicted as a homeless person lying down on a bench, has been placed at the entrance of the Office of Papal Charities. It was created   by  Canadian sculptor Timothy P. Schmalz

The statue of Jesus that sits at the entrance of the Office of Papal Charities.

(Note:  “From the Peripheries..” That is how Francis started his pontificate: “Go out into the peripheries…..yes, out, out of your churches of sacristies to the far-flung outcastes and cast outs who live in the peripheries, “favellas”  and of whom you know nothing about.” These faceless, homeless, broken-down humans represent  the “crumbling church of St.Damian” a  St.francis was asked to “Go and repair” and not churches built of  brick and mortar. Note the “homeless Jesus sleeping covered in blanket  before the papal office. In it we should see the image of the on going crucifixion of Jesus. In earlier Notes CCV wrote, “Jesus wandering about dressed in a tunic (over which they caste lot) never had even a home address. Such homeless persons in the shanty towns are the living-crumpling-temples of God, His Church today

has to build or rebuild, and not 50-crore and one-crore monstrosities (towers of Babel) of pride and worldly glory. Stop therefore forthwith the present “church building mania”, and go about our neighborhood, imitating Jess doing good, feeding, heeling, comforting, helping, totally immersed in the works of mercy in this Year of Mercy. james kottoor, editor).

VATICAN CITY: The man is lying down on a bench, his body almost entirely covered by a thin blanket. You cannot see the face, just the feet poking out and these bear the unequivocal signs of the crucifixion. At the start of Holy Week in this Year of Mercy, a bronze sculpture depicting Jesus as a homeless person has been placed in Sant'Egidio's courtyard in the Vatican, at the entrance to the Office of Papal Charities.

The hyperrealistic sculpture was created by Canadian sculptor Timothy P. Schmalz.The artist decided to represent Jesus of Nazareth in this original way after seeing a homeless person sleeping on a bench outside during the Christmas period. "That is Jesus. That is how we should perceive the least among us in our heart," Schmalz wrote.

At one of the General Audiences in St. Peter's Square in November 2013, the author had the chance to present the Pope with a miniature of the homeless Jesus. In a statement to US media, the sculptor said: "He walked over to the sculpture, and it was just chilling because he touched the knee of the Jesus the Homeless sculpture, and closed his eyes and prayed. It was like, that's what he's doing throughout the whole world: Pope Francis is reaching out to the marginalized."
The statue is a gift from a Canadian sponsor, who helped Schmalz when he was 20 years old. The original is located at Regis College, at the University of Toronto in Ontario, Canada. Many other replicas are on display in Australia, Cuba, India, Ireland, Spain (at Madrid's Almudena cathedral) and in a number of cities across the US.
In April 2014, another replica of the same bronze sculpture was installed outside the small Episcopalian church of St. Alban in Davidson, North Carolina: one evening, the local police received a phone call from a woman expressing her concern because she thought she had seen a real homeless person in flesh and blood lying on the bench as she passed by on the other side of the street. In November that year, another replica of the sculpture was placed in front of London's Methodist Westminster Central Hall, just a short distance away from Westminster Abbey and Big Ben.

Schmalz is the author of a number of sculptures that follow this theme, for example a bronze work of Christ the Beggar is located at the entrance of the new wing of the Santo Spirito hospital in Rome, close to the Vatican. "I describe my sculptures as being visual prayers," the artist says.