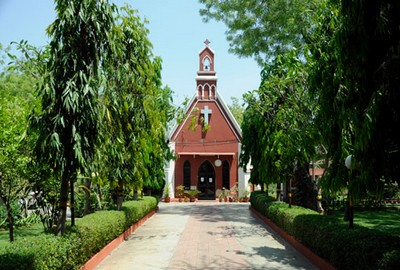 Dating back to 1862, the building, then a Protestant garrison church, was consecrated by the Bishop of Calcutta in 1866.

Gurgaon: In probably the leafiest and quietest corner of Old Gurgaon, a little away from the traffic bustle, there stands a comforting monument to history. This is the Church of the Epiphany, which is observing 150 years this year.


Dating back to 1862, the building, then a Protestant garrison church, was consecrated by the Bishop of Calcutta in 1866. It was looked after by the government until 1942 when it was entrusted to the Society for the Propagation of the Gospel. Earlier part of the Diocese of Lahore, the Church of the Epiphany came under the Diocese of Delhi upon the formation of the Church of North India in 1972.

The parish here is made up of more than 200 families, which is over 700 people of the faith. And it's growing. Which is why, back in January 2009, a fine new building came up. The old church can seat around 60 faithful. The new, roomier one can accommodate about 300.

The Reverend Sunil Ghazan has been the presbyter-in-charge here since 2011. The church, he says, continues to be a dedicated and energetic participant in society. "We have a lot of worshippers, and there are people who come on transit," he told TOI. Following an inaugural service on January 10, celebrations will continue through 2016 through a secular cultural evening, an inter-faith prayer gathering and a sports meet.

The church has embarked on socio-educational initiatives, including a playschool and day-care centre, and has plans to strengthen its engagement with disadvantaged communities.

"We plan to raise a commemorative building block, to which the pre-nursery and day-care centre will shift, and we'll also have an old-age home here," Ghazan said. A "daughter" church in Sohna is currently under construction. The 'Sadhu Sunder Singh' church will have an education facility for illiterate women, who work in a local brothel. "We've already started a tailoring school there, and appointed a teacher to help in the basic schooling of the underprivileged kids," the reverend said.

It may be Anglican in denomination but the Church of the Epiphany has members hailing from the Presbyterian and Methodist churches as well as from Baptist missions. The Delhi diocese has welcomed a bishop — and more than a handful of priests — from this city institution.

Source: The Times of India