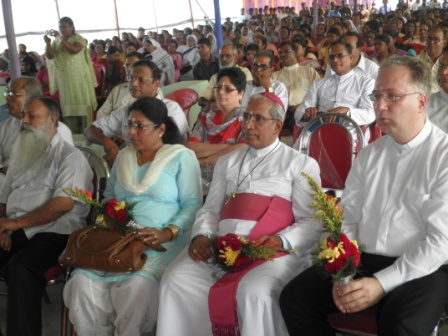 His Grace Archbishop Thomas D’Souza rolled out the Archdiocesan Pastoral Council (APC) for Calcutta Archdiocese with effect from 1st June 2014.  This is the outcome of careful deliberation for two years.

The Archbishop and the Coordinator Fr Dominic Gomes, Vicar General must be congratulated for having given a direction to the Archdiocese of Calcutta with an Action Plan. With a three-year term, the APC consists of 56 (fifty-six) Members comprising 22 heads of different orders & commissions, 17 nominated members from different deaneries, 15 Presidents of various Lay Associations /Movements and 2 Nominated Members under Special Category.

A 10-member Coordinating body (2 priests -1 diocesan + 1 religious, 2 religious Sisters; 2 men, preferably from PPC; 2 women from Women’s Association; 2 youth – 1 boy & 1 girl from Youth Association) is to be formed at each Parish and Deanery.

APC will be a three-tier exercise: (Planning, Implementation and Evaluation)commencing from the Parish level, moving through the Deanery levels and culminating at the Diocesan level.  It aims at being realistic, robust & well-thought out in its structure and life-giving in its goal. In other words, it is tobe built on the actual pastoral needs of the faithful.

So to draw up a realistic pastoral plan at the Parish level, leaders of each parish have to identify and make a budget for these needs (food, education, health, sanitation, high ever-increasing school & college fees, inability to afford higher education due to paucity of funds, inability to pay doctors’ fees and medical bills).  These needs and budget will vary from parish to parish according to size and financial health.

Pastoral means shepherding the flock, their protection, tending to their needs,  encouragement, feeding, shielding, restoring and leading by example to move people on in their pursuit of holiness.

Pastoral care is also a term applied where people offer help and care to others in their church or wider community. Pastoral care is looking after the personal and social wellbeing of children or students under the care of a teacher. It encompasses health, social and moral education, behaviour management and emotional support. This usage is common in the United Kingdom andCommonwealth countries such as Australia and New Zealand, where it is also used for student support services at the university level.

However, a few parish priests are dilly-dallying on PPC and PFC. They are in a chicken and egg situation which comes first: PFC & PPC, the 10-member Coordinating body or various commissions (Worship, Education, Youth, Social Justice, etc).  At the same time they are averse to seeking clarification from experts in the Archdiocese as they do not want to be termed ignorant!  Socrates, the famous Greek Philosopher always exhorted his students to ask questions to gain knowledge.  Doesn't the Gospel say "Ask, and it will be given to you; seek, and you will find; knock, and it will be opened to you. For everyone who asks receives, and he who seeks finds, and to him who knocks it will be opened" (Mathew 7: 7-8). Strange though it may look, it is the preachers of the Gospel themselves who have little faith in it!

As per Canon Law PPC and PFC are consultative in nature.  This means in spite of the best advisers, a Parish Priest might bypass them and have his own way. This would then be contradictory to what Pope Emeritus Benedict XVI questioned on  May 26th 2009 at the Ecclesial Convention in Rome: “To what extent is the pastoral co-responsibility of all, and particularly of the laity, recognized and encouraged?” He called for the improvement of “pastoral structures in such a way that the co- responsibility of all the members of the People of God in their entirety is gradually promoted. He stated that this “demands a change in mindset concerning the laity,” and that lay people “must no longer be viewed as ‘collaborators’ of the clergy but truly recognized as ‘co-responsible,’ for the Church’s being and action.”

The term consultative was written 50 years ago. In the light of what Pope Emeritus Benedict said this term is no longer valid and should be immediately replaced by CO-PARTNERSHIP.   Like all laws Canon Law too can be progressive in keeping with changing time. A consultant can be hired and fired, but views of the Laity, Co-partners cannot be set aside as they have equal stakes with the Clergy.  So much can be achieved by sharing power and the temporal goods for greater common good.  The sooner it is realised by the powers-that-be the better it is to avoid a re-enactment of the storming and fall of the Bastille.

In this context it would be worth remembering the prophetic comment by the Archbishop at the Meeting of the Secretaries of the Archdiocesan Commissions held 7th March, 2013 “ in a parish set up if the parish priest is interested, everything goes well.”