Church urged to adopt references to God as female 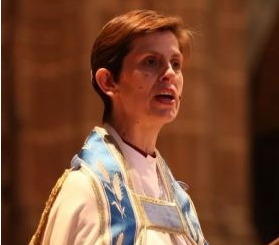 (In the picture: Rev Libby Lane is formally installed as the Church of England’s first female bishop)

London (Story by Matters India) — Support is growing within the Church of England to rewrite its official liturgies to refer to God as female following the selection of the first women bishops.

Growing numbers of priests already insert words such as “she” and “mother” informally into traditional service texts to try to make the language of worship more inclusive, it has been claimed.

But calls for a full overhaul of liturgy have already been discussed informally at a senior level.

It comes after the Transformations Steering Group, a body that meets in Lambeth Palace to examine the impact of women in ministry on the Church of England, issued a public call to the bishops to encourage more “expansive language and imagery about God”.

Hilary Cotton, chairman of Women and the Church, the group that led the campaign for female bishops, said a shift away from the traditional patriarchal language of the Book of Common Prayer is at an advanced stage in some quarters, The New Indian Express reported.

“The reality is in many churches up and down the country something more than the almost default male language about God is already used,” she said.

“The response you often get at one end is, ‘Why does it matter, because God is beyond all this?’ At the other end the reaction is: ‘You mustn’t, because Jesus calls God father.”

Mrs Cotton said that while congregations were experimenting with terminology, it was time for the issue to be considered by the Liturgical Commission, the body which drafts official service books.

“Until we shift considerably towards a more gender-ful expression in our worship about God then we are failing God and missing something,” she said.

Her comments came after a discussion at the Westminster Faith Debates on whether consecration of women as bishops will change the Church of England.

The Church of England’s worship already includes some references to God as female, many of them centuries old.

Canticle 82, the song of Anselm, the 11th century Archbishop of Canterbury, likens Jesus to a mother, and number 86, attributed to Julian of Norwich, speaks of God as “our mother in all things”.

“That gives an indication that the Church of England hasn’t set its face against this in any way, and there is recognition from the Church of England that men and women are made in the image of God and therefore it is entirely appropriate to express our worship toward God as a female presence,” said Mrs Cotton.

“There is a thin thread of this throughout history but having women bishops makes it particularly obvious that to continue to refer to God purely as male is just unhelpful to many people now.”

A Lambeth Palace spokesman emphasised that the steering group is independent of the Archbishop of Canterbury and any change in liturgy would have to be approved by the General Synod.