The former head of the Vatican-owned Bambino Gesu hospital in Rome Giuseppe Profiti has been given a suspended sentence for diverting funds to pay for cardinal Tarcisio Bertone's retirement home renovations. The Cardinal was the former Vatican secretary of state during the tenure of Pope Benedict XVI. Though the quantum of punishment leaves much to be desired considering the crime, the Vatican must be complimented for at least conducting a court of enquiry and conviction. It is the direct result of Pope Francis' drive for transparency in the Vatican Finance, in spite of his great loss of his Auditor-General Libero Milone and Cardinal George Pell whom he had inducted to bring about financial reform  in the Vatican. While Pope Francis is relentlessly chipping in the Vatican Wall of China (read Curia),  we do not hear any such thing in the Indian Church for it does not believe in and practise financial transparency and accountability to the Laity.  Isaac Gomes, Asso. Editor, Church Citizens' Voice.

The former head of the Vatican-owned Bambino Gesu hospital in Rome has been convicted for abuse of office after diverting $481,000 to renovate a cardinal's apartment.

The court also reduced the charge from the more serious offense of embezzlement to abuse of office. Massimo Spina, the hospital’s treasurer, was acquitted, during the trial which began in July and exposed a lack of transparency in the financial handling of Vatican assets in Italy.

Profiti and Spina were charged with spending 422,000 euros ($481,000) in 2013 and 2014 on refurbishing the Vatican retirement home of Cardinal Tarcisio Bertone, which has a large terrace and views of St. Peter’s Basilica. 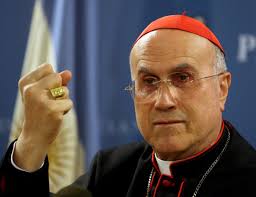 Cardinal Tarcisio Bertone who considered himself a Monarch.

Bertone, 82, was the Vatican secretary of state, effectively the deputy pope, for most of the pontificate of former Pope Benedict. He was considered one of the most powerful men in the Roman Catholic Church before was removed from office in 2013, eight months after the election of Pope Francis.

Profiti said the hospital used some of its funds to renovate Bertone’s apartment because the cardinal had agreed that it could be used for fundraising.

When the Vatican confirmed last year that Profiti and Spina were under investigation, a lawyer for Bertone said the cardinal had never asked for or authorized payment for the restoration work from hospital funds.