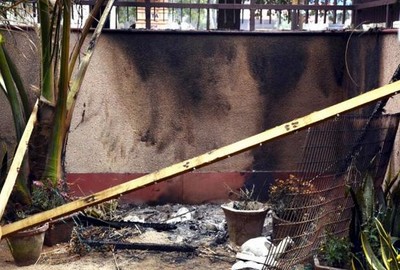 A minor fire broke out Saturday in the Christmas crib at a church due to a short circuit in the decorative lights, police said. The church management, however, said it was an arson attempt.

The fire was noticed around 8 a.m. after morning prayers inside the church in Rohini area of northwest Delhi.

Police suspect that the fire was caused due to a spark in the lights used to decorate the tableau, which the church management was to remove in a few days.

"After the prayers, a church employee noticed the burnt statues and other decorative materials in the crib arranged near the boundary wall of the church," said a member of the church management.

Savari Muthu Sankar, spokesman for the Delhi archdiocese, alleged that it was an arson attempt.

"It seems somebody poured some chemical on the crib from outside the church and set it on fire. All the statues were burnt. It was a failed attempt at arson in the whole church," Shankar told IANS.

The authorities immediately informed police but they declared it was due to a short circuit without a proper investigation, he said.

"There was rain the whole night and the crib was wet. How could a short circuit cause the fire," John Dayal, former president of the All India Catholic Union, told IANS.

The church authorities did not inform the fire service as it was not a major blaze, police said.

On Dec 1, the St. Sebastian Catholic Church in east Delhi's Dilshad Garden was gutted in an attack by unidentified assailants. A day after the incident, at least 1,000 people protested outside the Delhi Police headquarters demanding a probe.