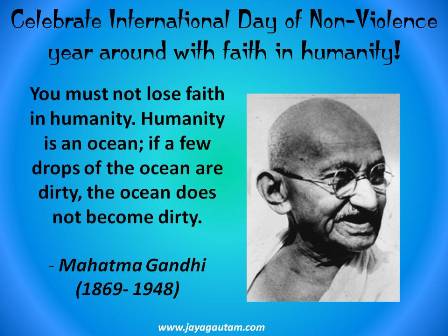 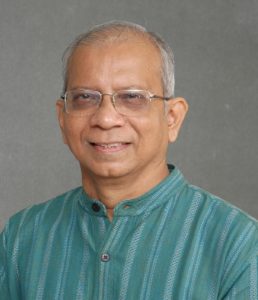 [Note: Fr. Cedric Prakash S.J. is a noted human rights activist.  Now he is serving Jesuit Refugee Service (JRS), Advocacy & Communications,  MENA Region, BEIRUT LEBANON.  Jesuit Refugee Service MENA Region accompanies, serves and advocates on behalf of refugees and other forcibly displaced persons.  In this article Fr. Cedric urges us to embrace non-violence in these times of violence which has permeated almost every sphere of life. "Let us embrace non-violence as an attitude which is non-discriminatory and non-xenophobic" he says. In a way he is calling for an end to Arms Race (a very lucrative business by Developed Countries – mostly Christian – to keep their economy going) and building of barriers like the Wall between USA and Mexico proposed by Donald Trump.

Fr Cedric's appeal is also a reminder to the Indian Church which is infested with priests who believe in money and muscle power. Through his message of  embracing non-violence as a way of life by choice, he is urging the Indian Church to practise what it preaches – honesty, fellow-feeling, transparency and accountability towards its flock – in line with the exhortation of our Pope.

The Synod 2017 which ended on 30th September 2017 and was held by the Archbishop of Calcutta at Morning Star College, Barrackpore, has much to do in the above four areas.  Unlike other Synods, this Synod has kept its resolutions under wraps and will come out with these only on 26th November 2017.  Clearly, this delay of two months  to announce the resolutions adopted at the Synod, does not auger well for those who believe in transparency in the Indian Church. Why is this hush hush in the age of digital communication? Members of the Laity who could not be accommodated in the Conference, could have been invited to give their points of view, on-line or through video-conference, on the 12 Concerns which concern them and only them. After all the Synod was a post-mortem of the Archdiocesan Pastoral Plan which has failed to take off as expected, in spite of having been launched more than two years ago on 9th August 2015.  How could the Archdiocesan Pastoral Plan be decided upon, keeping 99.5% Laity of the Archdiocese out of the deliberations? One cannot forget the 25 April 2016 kidnap, extortion (Rs 50 Lakh) and assault of Bishop Gallela of Kadapa by three of his own parish priests who had asked him for plum posts and other perquisites commensurate with their "high caste (Reddys)."  The Church of Andhra Pradesh and the CBCI both are tight-lipped on the action taken against the three culprit priests, even after one and a half years. Instead of being DEFROCKED summarily, have they been let loose among unsuspecting believers in some other parishes?

One also cannot forget the ghastly incident of 20th June 2012, when the all-powerful and arrogant Parish Priest (who hailed from Kerala) of one of the largest parishes in Kolkata on the Eastern Bypass, let loose 30+ goons on his parishioners. Their fault was to urge him for institution of Parish Pastoral Council and Parish Finance Committee, and transparency & accountability in financial matters, in deferrence to the mandates of Vatican II.  Whichever parish this priest would go, he would indulge in a heady mix of politics and money-making game, including hobnobing with the local party in power and landsharks. The current Archbishop of Calcutta including the then Salesian Provincial did not lift a finger, in spite of repeated life threats & petitions and even complaints by Religious orders who had shut their doors on the parish priest for his arm-twisting mannerisms. When all appeals to the Church Authorities including CBCI failed, the matter had to be taken to court.  The omnipotent parish priest suddenly vanished into the blue one morning without handover (read zero balance).  At a meeting held on 4th November 2014 with the  aggrieved parties, the current Provincial signed a declaration that the culprit parish priest won't be allowed to come back to the Parish.  Many of the other promises made by the Provincial and his team of priests, are yet to be kept, as if they were not made (documents are available for ready reference. Please refer to the link on top left).

Fr. Cedric can be contacted at cedricprakash@gmail.com. Readers can also visit the site https://www.facebook.com/JRSMiddleEast to get a glimpse of the activities of JRS in the Middle East and interact with Fr Cedric.  Isaac Gomes, Associate Editor, Church Citizens' Voice].

Let us embrace non-violence in these times of violence! These times in which one has no qualms of conscience in aborting the unborn child or cheering for the death penalty to be given  to the ‘hardened’ criminal;  times in which, child abuse is rampant and one normally looks the other side when women are brutalized in the privacy of their homes and in the full-glare of society; times in which, a simple misunderstanding can lead to a murder or the accidental touch by another vehicle could lead to deadly road rage; times in which, war and bloody conflicts are easily justified by those in power, who control the destinies of ordinary people.

Let us embrace non-violence as a right! The right of every person everywhere in this world; the rights which are enshrined in the Universal Declaration of Human Rights and in the Constitutions of most countries in today’s world; the rights of the other – to life, to believe in the religion of one’s choice, to freedom of speech and expression; to eat and drink, to read and see what one wishes to- without fear or favour; the rights which are fundamental and inalienable, the denial of them isindeed violence!

Let us embrace non-violence with courage! The courage one needs to stand up against the fascists, the fanatics and the fundamentalists of today; the courage to take on the killers of Gauri Lankesh, Shantanu Bhowmick, Narendra Dabholkar, M.M. Kalburgi, Govind Pansare, of other media persons, RTI activists and human rights defenders; the courage to take on the molesters of the lady students in the Banaras Hindu University and those who suppress the voices of students elsewhere; the courage  to expose the Sangh Parivar and those who violently kill and crush others, be it those who eat beef or innocent children in the hospitals of UP. Mahatma Gandhi puts it succinctly,"non-violence is not to be used ever as the shield of the coward. It is the weapon of the brave."

Let us embrace non-violence in freedom!The freedom to take on the peddlers of war and violence; the freedom to carefront the power-hungry, crazy so-called ‘leaders’ of this world who spew hate, venom and divisiveness all the time; the freedom to expose the profiteering, blood-sucking military-industrial complex who care two hoots if violence becomes a way of life for many in this world; the freedom to challenge those countries who spend more on arms and ammunition than on the much-needed social sector.

Let us embrace non-violence with Truth! Truth that is the other side of the coin of ‘non-violence’ for Gandhi, as he aptly put it “my religion is based on truth and non-violence. Truth is my God. Non-violence is the means of realising Him”. Truth as we celebrate his memory on another birth anniversary. Truth in dealing with the ‘Godses’ of our times. Truth as a non-negotiable and as the way of living in a more just, peaceful and non-violent world.

Let us embrace non-violence on October 2nd the International Day of Non-Violence; a day on which, in keeping with the UN resolution, we all need to reaffirm "the universal relevance of the principle of non-violence" and the desire "to secure a culture of peace, tolerance, understanding and non-violence"; a day on which we must pledge to go beyond tokenism and cosmetics, to make non-violence an integral dimension of our daily lives

Let us embrace non-violence with the realisation in the words of Gandhi that, “non-violence is the greatest force at the disposal of mankind. It is mightier than the mightiest weapon of destruction devised by the ingenuity of man." Embracing non-violence today must be our way of proceeding!