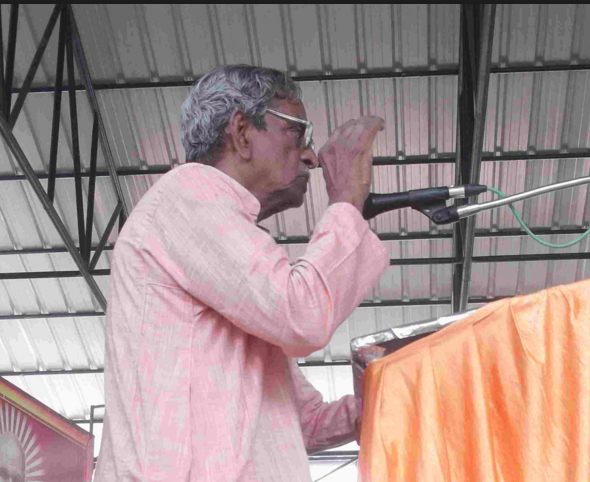 On behalf of the CCV crew, may I thank the US Catholic community, especially Shri Chacko Kalarickal, its power centre, for all the honours showered upon our Chief Editor, who always prefers to appear in small letters. Right from the banner design of this online news portal, what you all experience through CCV is the golden touch of Dr Kottoor. Under his captaincy, we are doing the toughest of jobs, giving sleepless nights to the ‘law breakers’. He does not let any of us also go beyond the general etiquettes of journalism. At the same time he calls a spade a spade. Quite recently a Bishop responded to his article referring to his sharp comments.

CCV today has gone far and is read widely.  Now, it is perhaps the only one world platform/portal where World Catholics can freely share their points of view. CCV works with love for all and malice to none. Without any prejudice we share all sorts of views – doesn’t matter if it is ‘for or against’.

CCV has the potential to accommodate more columnists and more commentators. Send us articles on a regular basis and all quality articles / reports will go on air.

The editorial Board as a whole congratulates our Captain and thanks our readers for the love and concern for the movement, which CCV has undertaken. With you all by our side, nothing is impossible.

His, a Kaleidoscopic life!

Kerala Catholic Church Reformation Movement North America (KCRMNA) is planning to have its Second National Gathering in Chicago on August 10, 2019.

The Board of Directors of the KCRMNA has decided to honour at their National Gathering, Dr. James Kottoor, the Editor in Chief, of the “Church Citizens Voice” (CCV), a Global internet Portal, of the Kerala Catholic Church Reformation Movement (KCRM).

Dr. Kottoor has been a journalist for the last 55 years. He has a Doctorate in Theology from Urban University, Rome, in April 1964, after presenting his 438-page thesis on: Doctrinal Mission of Laity in the Church; a Diploma in Sociology from Centre for International Social Institutions, Rome in September 1964 and a Bachelor's degree from School of Journalism, Marquette University, Milwaukee, USA in 1966.

He worked three months each as a full-time Editorial Staff at three weeklies in US: at Michigan Catholic, Detroit, with 12 Editorial Staff; Universe Bulletin, Cleveland with 20 Editorial Staff; and Catholic Register, Denver, Colorado with 25 editorial staff.  He was Editor and Publisher of the 125-year-old English Weekly ‘New Leader’ from Madras from 1967 to 1975; Associate Editor of Indian Currents, (IC) an International weekly, Delhi from 1978 and now its dependable columnist.

When Ernakulam land sale scandal broke, IC had prepared a 3-part article, which its owner the Capuchin Order banned publication at last moment to prevent public exposure of Cardinal. IC obeyed the Order and sent the bunch of articles to Kottoor, who published all of them.

He was an invitee to: 1) Ninth World Conference of Catholic Press in Luxemburg in 1971 and the adjacent Meet of Journalists from Developing Countries held in Trier, Aaacan, Germany; 2) Speaker on “Printed Word in Asia” at the one week Christian Conference of Asia Seminar in Hong Kong in June l975; 3) Invitee to World Conference on Women’s Ordination in Catholic Church in Dublin in 2001; 4) Conducted Dharmavijayam Campaign sponsored by Amruthavani, Secunderabad with Prof. Ramachandran, Head of  Tata Institute of Social Sciences in Bombay and brought out a 229 page Research Report; 5)  Speaker on the Role of American Indians in US  at  one day seminar at Indo-American Yoga Institute in Yonkers, New York on June 09, 2012; 6) Keynote speaker at Syro-Malabar Cathedral Hall, Chicago at one day seminar on Endogamy Controversy  in Kottyam Knanaya Community on August 03, 2013, on his 5th visit to US to meet his children in Chicago.

He has been the Chief Editor of CCV for the last five years. The other two Associate Editors are Sri. Joseph Mattappally (jmattappally@gmail.com) and Sri. Isaac Harold Gomes (isaac25gomes@gmail.com).

Besides Kottoor was associate editor of Hosanna of Joseph Pulikunnel. Actually, it was he who forced him to stop being a “rolling stone” and come to Kerala from Hyderabad to take charge of an English version of Hosanna which went haywire. Since he was given the job of editing the Fr. Hegger’s (of Holland and was Sponsor of Hosanna) ‘On the Road to Emmaus’ magazine in English, and not publishing any of his articles like “Carpenter of Nazareth”, “Carpenter wants to rebuild the Church”, etc. He resigned from Hosanna, after one year.

Then he was suddenly roped in almost by force by Vaideeka Mitram, Proprietor Fr. Chatthaparambil, a forward-looking decent priest whom Kottoor knew nothing about before. He took Kottoor and his friend Fr. Bread who had just arrived from Philippines to meet Kottoor. They visited Vivekananda temple in Kannyakumari. Fr. Chathaparambil took both of them free in his car to Kannyakumari and persuaded Kottoor to agree to edit Vaideekamitram at least for just three months. Kottoor’s objection was, how could he “a renegade from Priesthood, be editor of Vaideekamitram?” But the issue for Chathaparambil was, Fr. Christi Daniel, editor of Vaideeka Mitram had left for the US leaving the Monthly an orphan and Chathaparabil wanted to keep it alive by all means and he had good opinion about Kottoor who was a good friend of Christie Daniel as well. So Kottoor agreed to edit Vaideeka Mitram for three months but had to carry on for three years in Christi Daniel’s name!

Vaideekamitram soon became very famous. Even Joseph Pulikunnel who thought Christi Daniel was editing it, translated articles in Mitram like “Anatomy of a Jubilee Celebration”, saying “Vaideeka Mitram run by very erudite (Pandithar) priests says thus”. Another letter writer from Bangalore asked Vaideekamitram: “Why are you so critical of pompous lifestyle of Bishops? Do you know what happened to Kottoor of New Leader? The same will happen to you!” Many such comments were fun those days. Kottoor’s own PP in Thammanam and companion editor of Sathyadeepam said: “See what a powerful language and ideas Chrsti Daniel has”, of course without knowing Kottoor was editing Mitram! Lesson: “People never tell you bluntly and frankly what they think of you!”

Dr. Kottoor is adamant, for good reason, and unshaken on three points: 1) The Augean stables (worst corrupt, suffocating, stinking place) of clerical sex-abuse out in the open among High echelons of the Catholic Church is humanly impossible to cleanse; 2) The Church today is deeply mired and embedded in a Constantine Church; 3) What is to be aimed at and possible, is building up a community of CATTLE CLASS where everyone is on pins and needles competing for the last place to serve, to do foot washing ministry, and not in the rat race to compete and climb up on the ladder of authority to rule over the weak.

Augean stables remind one of the Greek mythology of Augeas king of Elis who was an extremely rich cattle owner of 3000 oxen whose stables were not cleansed for over 30 years but was finally done by Heracles by diverting two rivers Alpheus and Peneus through those stinking stables. Sex abuse stables in the Church is not just 30 but 1700 years old since the time of Constantine. We are living in a Church of Constantine, as stated by good Pope John XXIII while opening the second Vatican Council and giving the central reason: “To sweep clean the dust of the empire accumulated on the throne of Peter ever since the time of Constantine.”  For the last 50 years, the Church has achieved nearly nothing to remove this dust of the empire covering Peter’s throne; nor will it achieve anything tangible in the foreseeable future. So dump the present hierarchical, showy, imperial, glorious, triumphant, militant church with all external exhibition and publicity and focus totally on the simple, humble life of Jesus going round doing good to the needy, sick and exploited. He lived even without an address: “Birds have their nest, foxes their holes…….”

Pope Francis often pitied many bishops who go about crooked ways to get elected as a bishop. But once they become one, they start “pea-cocking” in colourful royal purple, gold and satin regalia and all such stupid worldly things. So called clerical class brothers only; blasphemous royal titles have no place in the Cattle-class Brotherhood of Jesus.

Kottoor wrote two books: “Woman Why are you Weeping?” based on his Dublin Conference experience of Women’s Ordination and “Womb to Tomb”, a discussion on one’s Life’s Journey from birth to death in search of God’s light. He writes regularly on Socio-political and Religious issues, in weeklies like Indian Currents, Delhi, Chicago Express, websites like Matters India, Delhi, Almayasabdam, Kerala, Emalayalee, US malayalee, South Asia Mail, Malayalam Daily News, all in US, British Patram, Face Book (facebook.com/jameskottoor) and Twitter (twittercom/jameskottoor) and has  his own website open to all: http://sites.google.com/ site/james kottoor  speaking/