How to eliminate Terrorism? We must take the lead to combat terror 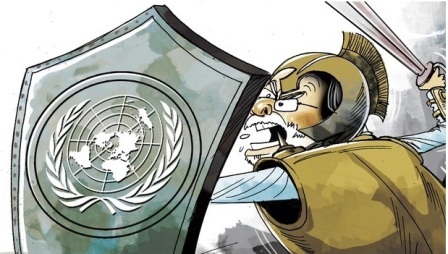 We must take the

(Note: Terror strikes to kill,  like fireworks to entertain, seem to have become the pasttime for some  and trade mark for  others in societies like  the ISIS, al-Qaeda and Boko Haram, especially in the Middle East and  Muslim dominated countries around the globe.

One thing is absolutely clear. Today’s internet world of instant communications  which binds together communities and nations tightly has provided the most fertile soil and climatic conditions, as never before, for the lush growth of terrorism all over the world.  One of the striking features of this terror group is that they are mostly from the age group of 17 to 27, many of them well to do, well educated and drawn from some 80 countries.

Therefore every right thinking  person who believes in the equality and brotherhood of all  humans – followers of Jesus pride themselves  to be such —  should rake his/her brain to diagnose the root causes of this destructive epidemic, to eliminate it from the face of the earth.

Trying to destroy and eliminate disconnected suicide bombers with massive air raids and saturation bombing —  techniques  used  by great powers like US, Russia, France  —  can be compared only to burning down a whole house to  catch and destroy a rat, besides causing death to ever so many innocents. A rational and humane approach should be to meet violence with non-violence taught by Gandhiji  and  long before by Jesus himself. A great mind Ram Jethmalani, a senior advocate and Member of Parliament speaks here of a  Global Counter-Terrorism Strategy  composed of 4 pillars.

To that must be added smart thinking of peace-loving people among you readers like Martin Luther King,  Nelson Mandela. Therefore come out with your constructive suggestions. None of us can be at peace until brutal slitting of the throats of innocents is brought  to naught. james kottoor, editor).

I write this piece not only for my fellow citizens, but also to remind our triumvirate of the Home, External Affairs, and Defence Ministers to marshal all their strength for combating the monster of terrorism that threatens to devour the world.

Recent terrorist events around India and pre-empted attacks in India clearly establish that the IS is as much a threat to our country as it is in the Middle East. I wonder whether people are aware of why the second ‘IS’ in the name of the murderous organisation, ISIS, was dropped?  Because it is no longer the Islamic State in Iraq and Syria, but is directed towards every country, including India.

India, as an aspiring world power, must take the lead in exterminating this international monster promptly, for the peace and security of our secular nation and the world, and get into action in the UN, Security Council and the General Assembly. 2016 marks the 10th anniversary of the UN Global Counter-Terrorism Strategy. In 2006, the General Assembly adopted the UN Global Counter-Terrorism Strategy (Resolution 60/288) by consensus to enhance national, regional and international efforts to counter terrorism, through a common strategic and operational approach, and to combat it individually and collectively, mainly through strengthening state capacity and better coordinating the UN system’s counter-terrorism activities.

The Global Counter-Terrorism Strategy is composed of 4 pillars — addressing conditions conducive to the spread of terrorism; measures to prevent and combat terrorism; measures to build states’ capacity to prevent and combat terrorism and to strengthen the role of the UN system; and measures to ensure respect for human rights for all and the rule of law as the fundamental basis for the fight against terrorism. The General Assembly reviews the Strategy every two years, and at its 5th review on July 1, 2016, a detailed strategy based on the above principles was unanimously adopted.

The General Assembly resolution makes it clear that the primary responsibility for implementation of the Strategy rests with member-states, and gives the UN system the pivotal role for promoting coordination and coherence in the implementation of the Strategy at national, regional and global levels and in providing assistance to member-states. The world has witnessed repeatedly in recent years, the rise of new types of terror threats to international peace and security. The most significant challenge is the spread of violent extremist ideologies and the emergence of terror groups fuelled by them. Violent extremism is a diverse phenomenon, without an internationally agreed definition. Nevertheless, in recent years, terror groups such as the IS, al-Qaida and Boko Haram have clearly defined the content, intent and operation of terrorism and violent extremism.

These groups unite in a single ideological source but transcend national boundaries. In recent years, terrorist and violent extremist groups have inflicted immense damage. The statistics are frightening: thousands of civilians killed and wounded in terrorist-related incidents in the past decade and millions of men, women and children displaced. Women and children, in particular, suffer, given that many have been sexually abused and enslaved. Even UN field missions and country teams in Africa, Asia and the Middle East have been attacked. This new phenomena of an undefined state of war, which eludes the existing Geneva Conventions on War, calls for an urgent need for increased international cooperation. In 2006, terrorist groups had a certain freedom of movement from their bases in ungoverned spaces.

Al-Qaida sought to be a vanguard, preparing the conditions for a takeover of the State in some Muslim majority countries. Its success was limited and resulted in many deaths, almost invariably of fellow Muslims. However, al-Qaida set the stage for the emergence of a more ruthless and determined form of terrorism. Al-Qaida in Iraq became Islamic State of Iraq in 2006 and then ISIL in 2013 before finally calling itself simply the Islamic State and declaring the re-establishment of the Caliphate in 2014.

IS and al-Qaida remain indistinguishable in terms of their vision and objectives, but differ in tactics. From its beginnings, al-Qaida has believed that it should work patiently, while IS believes it has to force the pace. IS still controls a sizeable area of Iraq and Syria and has expanded its reach through affiliates in Libya, Yemen and West Africa, while claiming “provinces” in other countries. One of its affiliates, Boko Haram, has been particularly notorious. IS has also inspired, encouraged or directed attacks in faraway countries. In addition, it has attracted recruits from more than 80 countries. Spurred to compete, al-Qaida and its affiliates have established control of territory, most notably in Somalia, Syria and Yemen, and continue to mount attacks in Europe and North, West and East Africa, as well as in Asia.

Terrorist tactics have also evolved. Suicide bombings have become more common, but so have mass-casualty and complex attacks mounted by a group of attackers working together in one or multiple locations. Another worrying trend has been the growing tolerance of terrorism by States, especially when terrorists attack rivals. The role of the media and the use of social media by terrorist groups have gained a new quality.

Most new recruits are now from 17 to 27 years of age, with differing levels of education and social and economic backgrounds. That these developments have occurred, and even increased, as the world has poured more resources into countering terrorism raises serious questions.

India should take the lead and mount continuous pressure upon the UN so that its intentions are urgently actionated and effective international mechanisms set up to make a visible dent to terrorism and preventing violent extremism, not just in words, but in decisive action.

Ram Jethmalani is a senior advocate and Member of Parliament