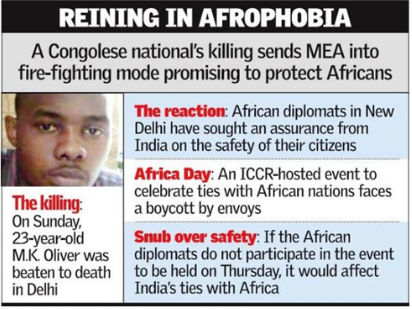 Congolese student Masunda Kitada Oliver was beaten to death by a mob in South Delhi’s Vasant Kunj area on Sunday.

(Note: India-Africa damage control  must have prompted the Hindu to give the title as “Death of Congolese student”  instead of “Murder of…” because according to other reports, even in this report (see the phrase recent murder of the Congolese student, below even in this report)  and circumstantial evidence it was murder prompted by racial prejudice. There is no point in denying that or pretending that we, Indians are not racist or caste and class minded worse than colour-caste infected Americans due to which blacks in US don’t get equal treat even before law there. Does any amount of repating “Sub Ka Vikas,  sub ka Sat” make any one believe that Modi and His Hindutva parivar are free from Caste poison or anti-Musloim, anti-Christian prejudice and mindset?”

Similarly Caste atrocities go unpunished here in India almost daily. The latest howling example is the Kidnap and torture of Dalit Bishop of Cuddapha  and extortion of money up to the tune of Rs.50,000/- from him by the three upper caste Reddy priests. What is more the silence of Cardinal Baseliue Cleemis, CBCI Chairman, Cardinals Alancherry and Toppo (Oswald of Bombay was gracious to condemn it instantly) all other Indian Bishops and priests, speak louder  than a loud speaker that even the Catholic Church in India is stinking with the despicable  malaise of casteism, racism and blue-blood political superiority. The worst thing about it  is the thought,   they can’t be healed. The reason is they don’t admit they are racists and caste minded even when they openly practice it in their daily life.In this case the Indian Society as a whole –– irrespective of

religious and political differences — is in the dock, as the report below loudly proclaims. May the murder of the Congolese student Masunda Kitada Oliver and the Kidnap of Cuddapah  give sleepless nights to the Church in India   and  torment it until it gives up it caste mentality. james kottoor, editor)

The Ministry of External Affairs moved to control the damage in India-Africa ties due to frequent attacks on African nationals which prompted the African envoys to cancel celebrations to mark the Africa Day event, organised by the Indian Council for Cultural Relations (ICCR).

The Minister of State (MoS) for External Affairs Gen. V.K. Singh met a delegation of African diplomats on Wednesday and requested them to “continue with the tradition” of marking the event with suitable celebrations, sources told the media.

However, a senior African diplomat told The Hindu that they are unlikely to change the decision to boycott the event to be held on Thursday under the auspices of the ICCR.

The MEA said that an event was held on Wednesday evening to mark the Africa Day in the outskirts of Delhi but senior African diplomats refused to acknowledge the smaller event as the main celebration.

“The Minister of State will also do an outreach event with African students along with concerned Embassies to reassure them of safety. It was also decided that the MoS would meet the African Heads of Mission every three months,” sources said, after the meeting between Gen. Singh and the African diplomats. Diplomats confirmed to The Hindu that the quarterly meetings with the MoS will be focussed on safety and security-related issues faced by Africans in India.

Earlier in the day, following the story in The Hindu on the decision of the African envoys, External Affairs Minister Sushma Swaraj took to Twitter and sent out nine messages to assuage feelings and deputed Gen. Singh to address the concerns of the heads of missions of Africa regarding growing violence against African nationals in India.

Responding to the news of cancellation, Ms. Swaraj said, “I have asked my colleague Gen. V.K. Singh to meet the heads of missions of African countries in Delhi and assure them of the Indian government’s commitment to safety and security to African nationals in India.”

The African Group of Heads of Mission took the decision to recommend to their governments “not to send new students to India” due to “stereotypes and racial prejudice against Africans in India.”

The decision was taken at a meeting on Tuesday in the High Commission of Ghana called to discuss the recent murder of the Congolese student, Masunda Kitada Oliver. Following Ms. Swaraj’s tweets, the MEA also confirmed that a group of African diplomats met Amar Sinha, Secretary (Economic Relations) at the MEA, regarding the safety of African nationals.

Interestingly, the African move comes two months before Prime Minister Narendra Modi is scheduled to leave for a trip to Africa, when he is expected to visit Mozambique and South Africa, as a follow up to the India-Africa Forum Summit of October 2015