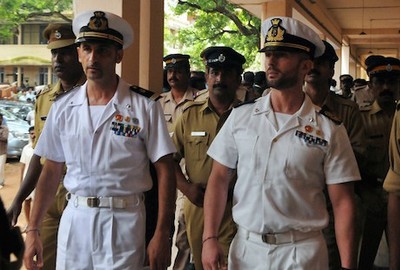 Church officials and fishing industry leaders in southern India have criticized a United Nations tribunal's decision to suspend all trial proceedings against two Italian marines accused of killing two Catholic fishermen off the southern Indian coast three years ago.  The Hamburg, Germany-based International Tribunal on the Law of the Sea on Aug. 24 directed India and Italy to suspend all proceedings related to the 2012 incident while it decides which country has jurisdiction.  Msgr. Eugene Pereira said the tribunal's decision places doubts over India's authority to exercise jurisdiction over the two marines.

“It is a threat to the sovereignty of India," said Pereira, vicar-general of the Archdiocese of Thiruvananthapuram, home of one of the victims. The other victim lived in nearby Quilon diocese.  India slapped murder charges against the marines — Salvatore Girone and Massimiliano Latorre, who were on guard duty on board the tanker Enrica Lexi on Feb. 15, 2012.

The men said they accidentally shot at the fishermen suspecting them to be pirates.   “We condemn the ruling as it indicates that there will be no justice for the poor fishermen who were killed. We want the Indian government to take up this issue and ensure justice for them," Pereira told ucanews.com.  Pereira said a meeting of the fishermen coordination committee was being planned for Aug. 27 to "chalk out plans to protest this ruling" and ensure justice for the families of the victims.  The tribunal also ruled against Italy's request for the marines to be freed while they await a decision.