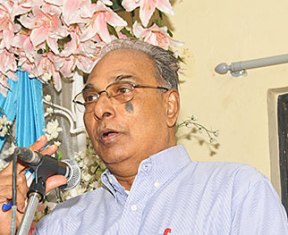 A book, “The Future of Christian Mission in India,” by Fr Augustine Kanjamala which was recently released in the US has stirred up quite a hornet’s nest in the Church even before its release in India.

Fr Kanjamala was born in Kerala, southern India, in 1939. He entered the Divine Word Seminary at the age of 17 an was ordained a priest in 1970. He worked for three years among the tribal Catholics of Odisha (formerly Orissa) in eastern India. He taught mission theology in major Indian seminaries and was a scholar in residence at Catholic Theological Union, Chicago, in 1986.

He is the author of Religion and Modernization of India (1981) as well as numerous articles. The Future of Christian Mission in India is the fruit of forty years of research, teaching, and publications. He was the secretary of the Catholic Bishops’ Conference of India’s Commission for proclamation and communication.

Yogesh Pawar of the Daily News and Analysis spoke to the Divine Word priest about some contentious points he raises about conversion, exclusivism and the question mark he puts on the very relevance of the Christian mission. The interview appeared in dnaindia.com on December 28, 2014. Excerpts:

You say in the introduction to your book that the Christian mission in India is not relevant any more.

Yes. The Christian mission has been a complete failure both in India and across the world. The traditional concept of the Christian mission is just not relevant any more, definitely not in Asia at least given the ground realities. After nearly three to four centuries of Christian Faith arriving in Asia less than 3 percent of the population has accepted it. After so much time money and efforts, as many as 97 percent of the population have rejected the concept of Christianity.

Aren’t you worried taking such a stand since you’re yourself a part of the clergy? Did you get your work whetted before publication?

Why should I? I am merely making a logical argument. Asking the mission to introspect and correct itself can’t be wrong. As for asking anyone to whet my work, I don’t think that is necessary according to rules.

Are you discounting the good work that the Church has done?

I am not saying that. My book argues that though it has failed spectacularly quantitatively, qualitatively it has achieved a lot. And I am not merely talking only about institutions created for healthcare and education but also about a more fundamental Hindu mindset change. This led to socials changes like the rejection of socially ill practices like sati, child marriage and castration of young children. The religious identity many marginalized caste and community groups found with Christianity, has helped them find a voice to question their oppression and exploitation and assert themselves.

But has the Church really been successful in breaking caste. In Kerala, your own state, you see many denominations in keeping with the caste hierarchy. How can you say that when 2/3rd of those who converted come from Dalits and tribals? But even within the Church and within the clergy why do we then see that its not these 2/3rd but the 1/3rd from the upper castes who wield significant influence?
There are some tendencies like that, I agree. But you cannot deny that those Dalits and tribals who converted are doing better socially and in terms of quality of life, than those who didn’t.

Since there is such a hullaballoo over conversions right now, what is your take on conversions which are incentivized – financially and otherwise?

First of all this din over rising conversions is factually wrong. The latest census figures show the number of Christians reducing from 2.6 percent to 2.3 percent. Historically I know there have been some human rights’ excesses in the name of conversions during the Portuguese rule. Some of these new fangled churches outdo the aggression of marketing companies when they reach out to people for conversions. That is bringing bad name to the entire community. This is especially unfair given the good work that the Catholic Church has done in India both in healthcare and education.

Would you agree that some of the problems are also to do with the exclusivism that the Church propagates.

You know when I was secretary of bishop’s conference we conducted survey of over 15,000 nuns, priests and members of the laity to find out what they felt about this. A whopping 85 percent of them said that irrespective of their religion, if people lead a life of conscience, then salvation will be available to them as well. Only 15 percent even in the Catholic Church held on to the traditional belief that only Christ could lead to salvation. The Church is changing its ideas too. It now believes that it should evangelize and civilize simultaneously.

How can the Church which has itself indulged in acts like burning people at the stake, take a condescending stand saying we are bringing civilization to people?

When the Church says civilization it doesn’t mean it an offending way. We are simply brining education and awareness to people. You cannot deny that there are some communities less developed and some who have not seen any development at all. Surely there can be no problems with the asking for equitable development for all. You may have semantic problems with the way this is put forth. But you have to agree that where evangelization has failed, civilization has not. It has helped people.

Many accuse the Church of fomenting dissent among poor tribals by exploiting them, some even going on to point out how powers like the US use the Church to serve their own geo-strategic interests.

We have to see who is making these accusations. We all know members of the BJP government at the Centre make these kind of statements from time to time. This is part of the set pattern as this was the refrain even where the BJP is in power in various states. You know many of these states have passed the anti-conversion bill. So this is purely political. And I make the point in my book that conversion will have political consequences because people link it to the way people vote. One of the outstanding ideologues among them is Arun Shourie.

You and Arun Shourie go a long back, don’t you?

Yes. When I was secretary of the Bishops’ conference I invited him to a national consultation on evangelization in Pune around 20 years ago. I told my superiors that instead of getting people who will only say good things about us, let us get someone who is against us. Accordingly I proposed Shourie’s name and he came spoke for an hour and participated in the discussion that followed. Within a month of the conference he wrote Missionaries in India which many bishops did not like.

And that wasn’t the only book?

Yes. Shourie was later invited to publicly debate the issues he had raised a few months after the book’s release. He and I had an over three-hour-long debate. Later that too was brought out as a book. It is not surprising that Hindu ideologues like him keep attacking the Church.

Many voices from the US and Europe who aren’t Hindu ideologues like author Iain Buchanan have voiced similar concerns about the Church.

Yes. I’m aware there are some people within the Church are increasingly uncomfortable with the traditional understanding of the Christian mission and particularly take poor view of what they call ‘aggressive zeal’ shown by some missionaries.

Some people have reservation about such aggressive missionaries being turned into saints and deities.

I know there must have been lot of appreciation for St Francis Xavier for the number of people he got converted during the early 16th Century but I argue in my book how in today’s times he is unacceptable. I think the Church needs saints like Mother Teresa not Francis Xavier. Unfortunately for us, there will always be the small but powerful conservatives in every religion and they will take a long time to change. But the future belongs to secular rational thought.

Christian groups have raised concerns about the intentions of the Modi government vis-a-vis the community in light of the recent Good Governance Day.

The government is wrong if it thinks all Hindus are with them. Many Hindus have opposed this move. I don’t think its right to generalize all Hindus in one way. This mindset is only reflective of a miniscule right wing. Majority Hindus do not subscribe to such fundamentalism. Yes they’ve come to power on their own steam but lets not forget that the parliamentary elections saw BJP get only 31 percent of the vote. Even these 31 percent may not be fundamentalists but just angry with the Congress.

A Texas-based magazine Gospel for Asia says: “The Indian sub-continent with one billion people, is a living example of what happens when Satan rules the entire culture… India is one vast purgatory in which millions of people… are literally living a cosmic lie! Could Satan have devised a more perfect system for causing misery?” How do you react to this?

This is both saddening and to put it mildly, most unfortunate. One can even ask in a reverse way if the people espousing such views are not agents of Satan themselves. Creating division and hatred even in God’s own name cannot be God’s work. I’ve lived in the US. I find them the least-informed people. I wonder if the people writing this can even find India on a map.