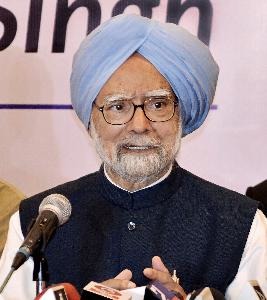 "Petrol and diesel prices in India are at a historic high. This is in spite of lower international crude oil prices because the Modi government chooses to levy excessive excise taxes. IANS  |  May 07, 2018.

Note: Unlike Modi, it is rarely that Manmohan Singh speaks and so he is caricatured as “Mummohan”. But when he speaks he reels out facts and figures to prove his statements to everyone.

This time he is speaking of the bleak situation in the country on the steep rise of petrol prices, in spite of the crude price being low on the international market; on the miserable situation of the banking sector, looters of national wealth fleeing the country while the watchman looks on; the hurting implementation of demonetisation and GST etc.

The voting public should read and internalize these facts in preparation for the coming Karnataka and other elections. james kottoor,ccv editor.

"Instead of passing on the benefit of low prices to the people, the Central government has sought to punish our people," the senior Congress leader (Dr Manmohan Singh) told the media here. The 86-year-old economist is here to campaign for the ruling Congress ahead of the May 12 Assembly election.


"During our (UPA government) tenure (2004-14), in the face of high crude oil prices, we cushioned the common man against their effects. Since the present government assumed power, the international oil prices declined 67 per cent, but petrol and diesel prices have increased 110 per cent," he said.


Reeling out facts and figures, the former Union Finance Minister said the BJP-led NDA government had projected to earn over Rs 10 lakh crore through constant increase in taxes at the cost of the common man."We must demand answers as to what use this money was put to? A healthy economy requires a well-functioning banking sector. Neither banks are lending nor is the private sector borrowing to make new investments."

The Modi government's "lack of reasoning and analysis was affecting India and our collective future", he said. Manmohan Singh also railed against the government for not making good in terms of growth rate despite favourable international climate, something, he said, its predecessor had done despite facing "turbulent global conditions".

Noting that the nation was going through difficult times, with farmers facing a crisis, youths not finding jobs and the economy growing slowly, he said the two avoidable blunders of the government – demonetisation and hasty implementation of the GST – had hurt the Micro, Small and Medium Enterprises (MSME) sector, resulting in loss of thousands of jobs.


The Goods and Services Tax (GST) was introduced on July 1, 2017 as an indirect tax in place of various state and Central taxes, including Value Added Tax and Service Tax. "Besides losses, the economy suffered due to these twin blunders, exports as a share of the Gross Domestic Product (GDP) plunged to a 14-year low."


Observing that the growth engines of the economy were spluttering, Manmohan Singh said the mismanagement of the Modi government was most evident. "It pains me to see how rather than standing up to all these challenges, the Modi government's response has been to stifle dissent when deficiencies are pointed out."


As economic policy has a significant impact on the lives of people, Manmohan Singh said it was essential that those tasked with decision-making pay attention to the policies and programmes and not act on whims and fancies."India is a complex and diverse country and no one person can be the repository of all wisdom. When we seek an answer for any of the government's disastrous policies, all we hear is 'the intentions' are virtuous," he said.


These "intentions" have resulted in massive losses, he said.   "The economic mismanagement of the Modi government, and I say this with responsibility, is eroding the trust of the public in the banking sector. Recent events which resulted in shortage of cash in many states were preventable."


The proportion of gross Non-Performing Assets (NPAs) has trebled since the UPA government demitted office. The quantum of frauds in the banking sector has almost quadrupled to Rs 1.11 lakh crore in September 2017 from Rs 28,416 crore in September 2013 while perpetrators of these frauds escaped with impunity."Lack of reasoning and analysis is costing India and our collective future," said the former Prime Minister.


The UPA government delivered an average growth rate of 7.8 per cent despite turbulent global conditions. The NDA, on the other hand, has managed lesser growth rate despite a favourable international climate and low oil prices."In fact, growth rate under the NDA is lower in spite of the change in methodology, which paints a rosier picture than reality," said Manmohan Singh.