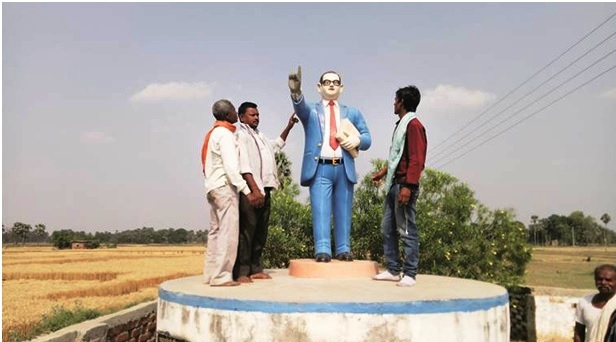 By D. Raja in the Indian Express

(Note: Where is democracy, when  equality of all, irrespective of their class, caste, creed and their socio-economic status in society, is guaranteed? It is precisely for this that India gave one-man or woman one  vote to all, not guaranteed even in US.

To prevent inroads of religion in the secular life of the country, western countries led by France brought in sharp division of Church and state. This is what Ambedkar also has done, especially for the benefit of Dalits the oppressed sections. Hinduism as a religion stands for the equality of all and promotes the prosperity of every human being when it prays: “Loka Samasta Sukhino Bhavantu”.

It is unfortunate that the RSS and Hindutva parivar have not understood this central message of Hinduism which forced “Ambedkar” to quit Hinduism in despair and become a Buddhist.

Today  being Ambedkar’s birth anniversary, let us hope that Modi and his Hindu supporters wake up to the demands of equality in a democracy,  instead of becoming a laughing stock before a civilized world. dr james kottoor, editor,ccv.

Today the nation celebrates the birth anniversary of one of her greatest sons, B R Ambedkar. At the same time, atrocities against Dalits are rising, there is widespread agrarian distress, the rights of women are being violated and the ruling establishment is taking measures to diminish and destroy institutions of governance, including Parliament and the judiciary.

It is ironic that Prime Minister Narendra Modi and the members of the BJP, who wax eloquent about “minimum government, maximum governance”, went on a day-long fast on Thursday on the ruse that the Opposition had created a logjam in Parliament. But it’s the government and the BJP which should be blamed for not discussing issues of public and national importance in Parliament.

In a way, they stand exposed for imposing the RSS agenda of making Parliament redundant. One of the important issues which the Opposition tried to raise in the last session of Parliament is the persistence of atrocities and increasing violence against Dalits and the dilution of the law to prevent atrocities against them. When the country’s highest court of justice was hearing a case on the so-called misuse of the Scheduled Caste (Prevention of Atrocities) Act, the government’s stand in the court seemed to indicate that the Act has indeed been misused. Though it has filed a review petition, the government did not take a strong stand in the court in the first place.

Several decades ago, Ambedkar had said that the law is the most potent weapon of the marginalised against inequality. It is strange now that the law to prevent injustices against Dalits is being diluted as a result of judicial intervention. The government’s initial silence on this issue amounts to a rejection of Ambedkar’s vision.

The RSS-BJP leadership, including the prime minister, claims that it has done more to honour Ambedkar than any other dispensation. This claim falls flat in face of the statement by a minister of the Union cabinet, who asserted that people should not uphold secularism. Religious and caste affiliations should be the markers of people’s identity, the minister asserted and claimed this will make them aware of their ancestry. He also said that the government would change the Constitution. Ambedkar’s place in the country’s history is not contingent on honours being bestowed on him. His place as a great thinker and a revolutionary, like Karl Marx, for the liberation of humanity from all kinds of exploitations and enslavement is assured. But Brahminical forces have been attempting to deny him his place in history. There have been attempts to disfigure his statues and debase his legacy. It seems that the design of these forces is to appropriate and annihilate Ambedkar.

The real tribute to Ambedkar would be building up a governance architecture that is shorn of Hindutva outlook and wedded to constitutional morality and values. It was Ambedkar who said that the creation of a Hindu Rashtra would result in a calamity. Those who invoke Hindu identity as synonymous with Indian identity are actually insulting Ambedkar’s legacy.

The rise of the Hindutva forces is directly proportional to the rising level of violence against Dalits and other marginalised and exploited sections of society. The core values of Hindutva go against the very essence of the Constitution, which guarantees equality for all citizens. The Hindutva worldview, based on the primacy of religious identity, is parochial and contradicts Ambedkar’s egalitarian vision for the country. The RSS-BJP leadership invokes Deendayal Upadhyaya when it talks about the constitutional scheme of governance knowing full well that he wanted a Hindu Rashtra, contrary to the Constitution’s ideals. They are desperate to create a wedge between the ideas of Ambedkar and that of the communists. But they should know that Ambedkar held Buddha and Karl Marx in high esteem in his quest for social justice.

The growth of Hindutva and neoliberalism has coincided and, therefore, the attacks on Dalits have increased. The policy of reservation, conceived as an affirmative action to ensure social justice for the Dalits, Adivasis and OBCs, is being made redundant. This is contrary to the vision of Ambedkar. The only remedy lies in following Ambedkar’s ideals which are best encapsulated in the slogan, “educate, organise and agitate”. This is essential to deepen public reasoning, and to understand the dialectics of caste-class relationships in Indian society.

Class struggle in India means a struggle not just against economic exploitation but also against social oppression. The communists and Ambedkarites need to work together to fight the communal fascist forces and to defend democracy, the Constitution and the interests of all socially-discriminated sections in the country.

(The writer is national secretary CPI and Member of Parliament.)