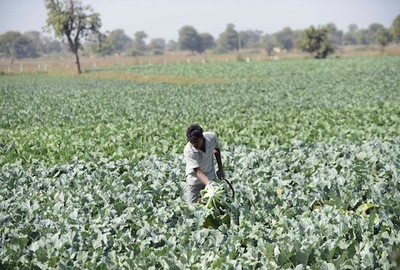 Bhopal: (UCAN) Some 750 small-scale farmers gathered in India's Madhya Pradesh state Feb. 3 to exhibit their produce and share knowledge as part of an initiative that a church agency spearheads to help in Bangladesh, India and Nepal.

Rajmat Bai, a 45-year-old tribal women from Badbar village in this central Indian state where Caritas India began the project in 2011, noted that through the program, farmers are now producing three times the amount of produce and that their costs have come down.

The adaptive farming program — supported by the European Union and operated by Caritas India — is in place in Bangladesh, India and Nepal. It aims to help people come together to find local solutions and adapt their traditional farming methods in the changing climate and decreasing land availability and resources.

The farmers' fair in Ghota village brought together farmers from Mandla, Sagar and Satna districts of Madhya Pradesh. It provided a platform for farmers to share the innovative practices, said Sunil Simon, program manager for Caritas India.

Prakash Ahirwar, a farmer from Sagar in Mandla district told ucanews.com that by using new methods taught through the program, he has increased his lentils crops yield three times from before.

Five years ago, some farmers in the region had abandoned farming millet and lentils because because of the crops' low yield and high production costs.

"It meant increased poverty, malnutrition and deaths for families," Simon said adding that farmers now record increased production with the help of experts and by pooling local knowledge. "In some cases, production has gone up four or five times," he said.

Father George Thomas, director of the Jabalpur Diocese's social service officer, said the project has "improved the living condition of farmers. "They have now revised their methods and are getting good results, he said.

Christians are often accused of indulging in conversion activities and attacked in the state especially in the villages.

Caritas executive director Father Frederick D'souza noted that the agency's work has been well received in the state, which has been marked by religious tensions in recent years, because "our work is inclusive.”

"We are seen as a professional voluntary agency working for everyone without any discrimination of religion and caste," he said.