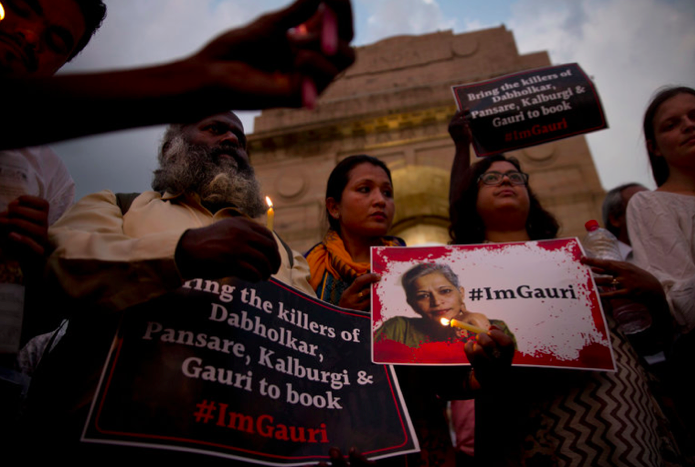 Murder most foul, malicious, ugly, shameful and stinking of “rising Hindu-nationalist militancy!” The Boss up above the heavens, through his binocular, New York Times, is watching you India and its “Hindu-nationalist militancy” remote controlled by its PM Modi,  that is being blamed. The bonhomie displayed through very warm and tight hug-diplomacy couple of months ago, all seems to have melted away.

“Dissenters in India, watch out!” is the message, loud and clear! It is “We are watching you and one day we will get you.” Is this the land of freedom we dreamt of when we wrenched our nation from the slavery of colonial rulers?

According to New York times PM Modi has let lose a climate of Mob rule, violence and slaughter, nay the American style Lynching of African slaves, to flourish aided and abetted by his right wing Hindutva-RSS brigade which vilify and project secular independent media as “prestitutes”, —  just forget about the embedded or alt-right journalism of Steve Bannon, the topmost strategy-policy adviser to Trump till   the recent Virginia- Charlottesville fiasco. Yes the NT has its count of  brave martyers for the freedom of epression  in India.

At least 27 Indian journalists, it says, have been killed since 1992 “in direct retaliation for their work,” and only one of the killers has been convicted. Modi tried and still tries to paint a rosy, glossy picture of India abroad through his regular forays to various world capitals. But what New York times writes is a clear proof that countries around the world are not being fooled by what Modi says and exhibits on his foreign tours.

True the heart-warming prolonged embrace and tight hug-diplomacy gave the impression to the outside world there is none closer to Trump than Modi. This New York times report points to the hollowness any such impression, if it exists at all. It is time that we Indians stop continue to live in a fool’s paradise. james kottoor, editor, ccv.

Murder of an Indian Journalist – By the Editorial Board, New York Times, Sept. 7, 2017

In the pic: People protesting and mourning the killing of the Indian journalist Gauri Lankesh in New Delhi, on Wednesday. CreditTsering Topgyal/Associated Press

The murder on Tuesday of the Indian journalist Gauri Lankesh, a fearless critic of rising Hindu-nationalist militancy, has all the hallmarks of a hit job.

“The message and not to independent journalists but to all dissenters is loud and clear,” tweeted Sidharth Bhatia, founding editor of the Indian online news site The Wire. “We are watching you and one day we will get you.”

Prime Minister Narendra Modi has let a climate of mob rule flourish in India, with his right-wing Hindu supporters vilifying “secularists.” The venom that reactionary social media trolls direct at journalists, or “presstitutes” as they call them, is especially vicious, but not entirely new. At least 27 Indian journalists have been killed since 1992 “in direct retaliation for their work,” according to the Committee to Protect Journalists. Only one of the killers has been convicted.

Still, Ms. Lankesh’s murder shocked India’s news media and set off protest marches in several Indian cities. “Journalists are increasingly the targets of online smear campaigns by the most radical nationalists, who vilify them and even threaten physical reprisals,” Reporters Without Borders said.

The government of the state of Karnataka is investigating the killing of Ms. Lankesh, an editor and publisher of a Kannada-language weekly tabloid, who was shot outside her home in Bengaluru. Her family has given the police closed-circuit video of the murder scene, so that the killers, and anyone who may have ordered the assassination, may be brought to justice.

This has not happened so far in the murders of other outspoken critics of right-wing Hindu nationalists. Narendra Dabholkar, whose campaigns against superstitious practices angered many Hindu religious activists, was shot to death near his home in Pune in 2013. Two years ago, Malleshappa Madivalappa Kalburgi, a former vice chancellor of Kannada University who spent decades debunking peddlers of superstition, was fatally shot in his home in Dharwad.

Ms. Lankesh had voiced concern about the climate of menace against journalists who didn’t toe the Hindu-nationalist line. If Mr. Modi doesn’t condemn her murder forcefully and denounce the harassment and threats that critics of Hindu militancy face daily, more critics will live in fear of deadly reprisal and Indian democracy will see dark days. (Follow The New York Times Opinion section on Facebook and Twitter (@NYTopinion), and sign up for the Opinion Today newsletter.)