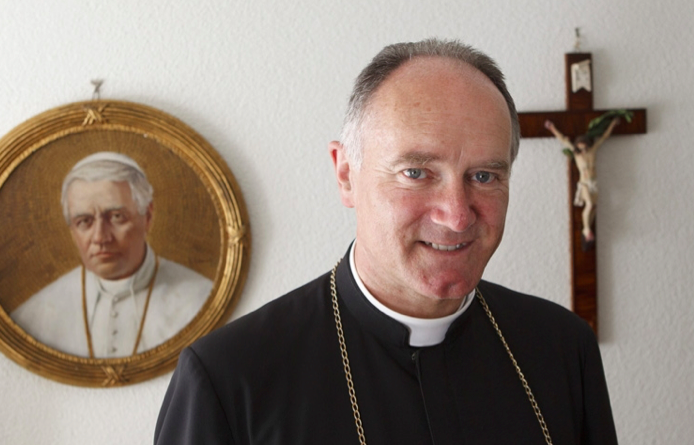 In the pic: Bishop Bernard Fellay, superior of the Society of St. Pius X, is pictured near an image of St. Pius X at the society's headquarters in Menzingen, Switzerland, May 11, 2012. (CNS/Paul Haring)

(Note: Pope Francis richly deserves the name “Pontifex” (“Bridge builder”). One cannot be a Christian, if he is a fens sitter and builder between US and Mexico like Donald Trump and he told him point blank. Like our bishops, especially of Kerala, he doesn’t quibble on the words but says what he means like Nathan the Prophet: “That man is You.” The name Pius X should bring up so many disturbing questions of conscience for Syromalabar bishops and the monstrosity of Kottayam diocese of a pure blood (endogamous) society it protects and fosters apparently putting words in the mouth of Pius X,which he did not say. Cardinal Vithayathil called it the 9th wonder! Pius X OKed Kottayam just for two reasons: 1. To settle a pestering  quarrel between Northerners and Southerners(who included also the Knanai  Thoman’s children from a washer women) and 2. Because of the hardness of the heart of the certain sections of the fighting factions. Let those interested read the history. In the  case of the Society of Pius X, now they themselves are repenting and seeking a union with the Vatican thanks to

the “bridge-building policy” of Francis, always ready to launch out into the peripheries in search of the least and lost. When will Kottayam diocese and Syromalabar Church learn this lesson from Francis and stop being hard heartened? james kottoor, editor)

VATICAN CITY: Pope Francis has met with the leader of a traditionalist group of Catholic bishops and priests who have been separated from the wider church for decades in opposition to the reforms of the Second Vatican Council, the Vatican has confirmed.

Founded by the late French Archbishop Marcel Lefebvre in 1970, the Society widely rejects the teachings of the Council, a 1962-65 gathering of the world’s Catholic bishops that led to large reforms in the church’s liturgy and its stance towards the world.

Pope Benedict XVI had sought to repair relations with the group, lifting the excommunications of four of their bishops in 2009. Those efforts ultimately failed when Fellay rejected a doctrinal statement drafted by the Vatican for the group to sign.

In a recent interview posted on the Society’s website, Fellay said he thinks Francis may consider his group as existing on the "periphery" and thus needing to be accompanied back to the church.

"[The pope] uses the expression ‘walk forward’ with people on the periphery, hoping to manage to improve things," said Fellay. "Therefore it is not a fixed decision to succeed immediately: a development, a walk, goes wherever it goes."

"It is clear that Pope Francis wants to let us live and survive," the bishop continued. "He even said to anyone who cares to listen that he would never do the Society any harm." Francis had indicated a move toward unity between the wider church and the traditionalist society with the opening of the ongoing Jubilee year of mercy last fall.

In a September letter to the Pontifical Council for the Promotion of the New Evangelization, which is organizing the holy year on his behalf, he explained that members of the society would be granted faculties during the year to offer absolution of sins "validly and licitly" to those who approach them for confession.

"This Jubilee Year of Mercy excludes no one," the pontiff said then. "I trust that in the near future solutions may be found to recover full communion with the priests and superiors of the Fraternity." In his recent interview, Fellay said he and the society were seeking to have “a clear definition sometime of this term ‘full communion.’”

Italian newspaper Il Foglio cited sources who said the meeting between Francis and Fellay Saturday "was positive" and that the "understanding is good" between the two leaders.Outside of the faculties granted during the Jubilee year, members of the traditionalist Society are considered not to be in full communion with Rome and, in normal circumstances, its priests and bishops cannot exercise Roman Catholic ministry.[Joshua J. McElwee is NCR Vatican correspondent. His email address is jmcelwee@ncronline.org.)