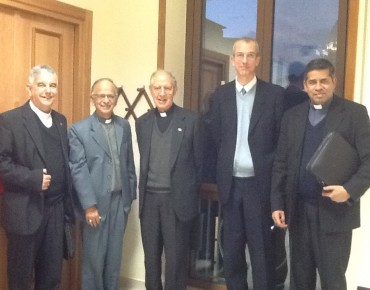 ” A million dedicated souls is a powerful force for the future of humanity”, said Cardinal Joao Braz de Aviz, in Rome on November 25, initiating discussions in the Plenary Session of the Congregation for Consecrated Life on the theme “New Wine in New Wineskins.”

A new self-understanding of the human person has called for a new understanding of committed life as well whether it be in the secular world or in religions life. We have to evolve new approaches to human problems and set new goals to strive after. The PLENARIA of the Congregation, November 25-30, was being held on the occasion of the 50th anniversary of the documents ‘Lumen Gentium’ and ‘Perfectae Caritatis’.

While trust in the surprising ways in which God acts in history was never absent, the Congregation sought to be extremely realistic in the analysis of the actual situation prevailing among the Religious of the world.

More than 3,000 leave every year, aging members are unable to keep going with their institutions and even to look after themselves. Other issues are weakening communities hesitating to choose between preserving their identity and opting for merger with other communities with similar charism, generation gap between members accentuated also by cultural differences, search for a new understanding of the feminine charism in Religious Life, and the struggle between life and faith in the hearts of all persons concerned.

Archbishop Jose Rodriguez Cabballo, secretary of the Congregation, lamented the auto-referential attitude of societies that were more concerned with survival and maintenance than reaching out to respond to new challenges. He referred not only to a fall in mystical fervor, but also low motivation in members and weak religious observance. He spoke of instances of a lack of transparency in administration and an eagerness in individuals for self-fulfillment rather than community achievement.

Despite these weaknesses, the member of the Congregation pointed out, one cannot not be blind to the determined efforts that various religious societies are making to address these limitations themselves, whether they be in area of religious observance, community life, simplification of structures, inter-cultural living, trans-cultural services, or apostolic daring.

Further, in response to the new ‘signs of the times’, new institutes are coming into existence, fresh forms of generosity are becoming visible in answer to new shapes of poverty; creative styles of response to apostolic needs are being developed. New themes of concern are brought to public attention. There is growing generosity. Symbolisms change but meanings and core loyalties remain.

There was a call for a spiritual awakening based on the Word of God, study of the original charism and Spirit-led discernment in diverse contexts.

Consecrated persons in secular life are showing how to bring the spark of the Gospel in various secular contexts. While economic inequality is growing and the figure of poverty and injustice itself keeps changing, initiatives are multiplying for reaching out to the last, least, lonely and the lost.

As the Gospel is being marginalized, a longing is growing in human hearts for its core message. As radical commitment becomes less and less visible in society, its heroic nature seems to exert a magnetic power on the venturesome.

Laity themselves keep urging the religious to greater generosity, setting an example in various Ecclesial Movements and showing that a Christ-centred life is possible. A spiritual hunger is noticeable everywhere, even among religious who are drawn to easier life or mere ideological answers to life’s questions.

The Asian and African members spoke enthusiastically about growing number of vocations in their contexts and the great hope they had for the future. They called for greater optimism in all situations, the need for developing a holistic vision of the present trends, deeper discernment, and interpreting charisms in diverse cultural and historical contexts. Archbishop Thomas Menamparampil was the sole bishop representative from India, along with the Superior General of the Pallottines, Fr. Jakob Nampudakam.

Pope Francis received the Congregation in an audience on November 27. He called on the members to have the courage to put aside the ‘old wineskins ‘, i.e., outdated structures that give an illusion of security and cramp creative apostolic dynamism. He invited them to develop new ways of community living and new styles of service to humanity that corresponded to the needs of those who were eager for the Gospel.

While the Pope urged them to look in the direction of ‘new horizons’ and search for ‘new paths’ in apostolic ventures, he also exhorted them, quoting Ignatius of Loyola, to be garbed in ‘poverty’ as the best safeguard against worldliness.

The members of the PLENARIA took part in a Vigil in the Basilica of Maria Maggiore on November 29th evening with thousands for religious, praying for God’s blessings on the Year of Consecrated Life. They pledged to take on courageously the new challenges that Religious Life faces in this fast secularising world and respond to its newly emerging needs.

The concluding mass at St. Peter’s was an invitation to all consecrated persons in the Church to be the Salt of the Earth and the Light of the world.