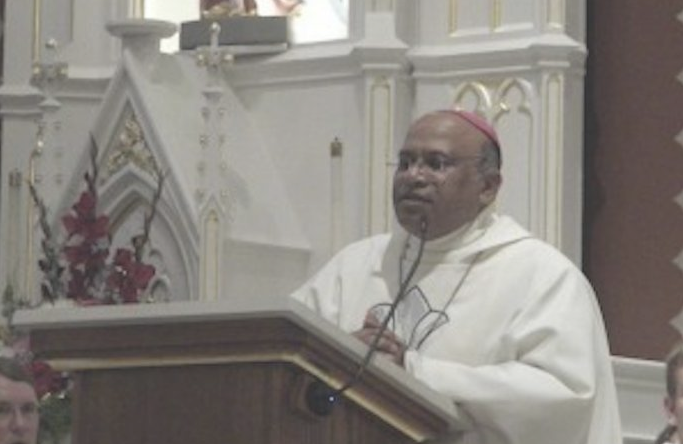 Catholic Bishop Prasad Gallela belonging to a Dalit community, of Kadapa was kidnapped on April 25th 2016. It was the first unheard of caste-propelled crime in the history of the Catholic Church in India which is all too vociferous in proclaiming, there is no “caste discrimination” in the Catholic  church.

The crime was committed by three upper caste Reddy Catholic priests of the same diocese. Basically it was an outbreak of Caste conflict –  the unwritten law being, High caste people should not take orders from low Castes, not vice versa —  afflicting the Catholic church from top  to bottom at all levels,  from bishops to priests to religious to laity. Actual perpetrators of the crime were some ten thugs employed and directed by the three priests who were resorting to violence as their last ploy to extract plum profitable posts in the diocese, according to reports already published.

The Indian Currents,  an International weekly from Delhi broke the news first and Church Citizens’ Voice (CCV), Kochi, took it up from the first week of May and gave wide coverage to the crime with inputs from the Bishop Gallela himself and Fr.  AXJ Bosco SJ, Secretary, SC, ST and BC Commission of TCBC and Adviser, National council of Dalit Christians. Hardly any Catholic publications in the country seem to have come forward to give due publicity  to the dastardly, shameful crime and explore its aftermath. But ever since  CCV has written  many short or long reports and articles and  sent them regularly to all Indian Bishops for their information, reflection and action. Unfortunately we have not received any reacton from any of them.

What is most striking and unimaginable is that the Church in India, especially the hierarchical church, which usually makes hell of a noise about attacks from outside against Catholic institutions or personnel, has been observing an ominous, ill-foreboding  studied silence ever since the kidnap, except for stray, namesake pronouncements of condemnation from Cardinal Oswald gracious of Bombay, and another joined statement of Andhra bishops condemning violence against minorities, but not uttering a word about the despicable caste-cancer or venom, which is at the core of the crime, which none of them, due to shame, want to accept, though all of them practice it more or less.

Cardinal Baselius Cleemis is the Chairman of the Catholic Bishops’ Conference of India. Not even he, to our knowledge, has come out openly to condemn or commiserate with his brother bishop. According to Fr. Bosco sj, mentioned above,  he has not even replied to this day, an elaborate letter Fr.Bosco wrote on  May 18th  2016 explaining the seriousness of the issue. For brevity sake that letter is held for now. It will be published soon.

So there must be, or could be serious other reasons for this stony silence on the part of the bishops enblock  especially in the context of the report that the criminal priests are out from jail, on bail already. What are those reasons? Is Bishop Gallela a “leper” for the fraternity of Indian bishops? Is he guilty of any thing serious which forbids his brother bishops to extend their sympathy and support publicly to him? We are not aware of any. If there are, they are to be dealt with separately and not to be mixed up with this pass-time of caste discrimination.

In fact the latest letter we have received and printed below, from E Jayaraj, General Secretary – SIDCA (South Indian Dalit Catholic Association) — is strident against the present  deafening, unsettling silence of the hierarchy. The names of the office bearers of the association points to its democratic representation in south India: its president, Alphones G.Kennedy is from Karnataka, Vice presidents James Joseph and Cp.Chinnayan from Kerala and Tamilnadu respectively, its General Secretary,  Esukala Jaraj from Andhra, and its  Treasurer Vijay Motghkur, from Telangana, according to their official letter pad of 13/7/16.

What follows first is an introductory note by the General Secretary Jayaraj of SIDCA followed by an open letter  mercilessly indicting the silence of top church officials. It is also signed   by eleven Christian organizations. Speaking of Cardinal Cleemis the letter of indictment says: “Cardinal Cleemis, the President of CBCI, who went all the way to Kolkata to meet the nun who was in distress (which was very kind of him), and to comfort her, could not find the way to Kadapa to meet and console his own brother Bishop who had to go through the agony of being betrayed and tortured by his own priests.”

To feel the enormity of the pain and betrayal suffered by the Dalit Catholic community in India, read prayerfully and critically the two letters and make your own judgement about how Catholic, apostolic   and holy is the Catholic Church in India today.

Greetings from South India Dalit Catholic Association (SIDCA). We were very much involved along with Citizen Forum for Justice in the solidarity rally and the public meeting held in Kadapa on 16th May 2016,  concerning Bishop Prasad Gallala’s kidnapping.

There was no response from Catholic leadership condemning the incident of brutal violence done by priests even after the “Open Letter” by Fr. AXJ Bosco SJ to his Eminence Cardinal Cleemis (which is attached). We feel disappointed and angry. Like minded 11 Christian organizations whose members felt shocked and sad have signed the enclosed present letter demanding a fitting response to the Kadapa incident.

Condemning the Silence of the Official Church on the Kidnapping and torturing up of Most Rev.Bp.Prasad Gallela by three priests

The updates of the case following the kidnapping of Most Rev.Bp.Prasad Gallela, now and then. come on the TV and News Papers. Recently the Bishop was called for inquiry to the Police Station.Fr.Raja Reddy, Fr.Marreddy and Fr.Vijay Mohan Reddy have come out on bail. All these are in the media. The crime and the scandal are talked about openly. But the Church leadership purposely and conveniently keeps silence still.

An Open letter   addressed to Cardinal Cleemis, by Fr.AXJ.Bosco SJ, more than a month ago pointed out the ‘significant silence’ of the hierarchy, CBCI,TCBC as well as CRI.The letter also suggested concrete actions to move forward to do justice. The excuse in the leadership circle seems to be that it is a family matter and it should not be discussed in public. Though the authorities are very much aware that it is a public crime and a scandal, known to all the people through the social media, “They will keep on hearing and they will not understand, they will keep on seeing and they will not perceive” Mt 13/14.(New American Standard Bible.)

Silence on social discrimination is a crime; it is a sin against God and humanity. Social discriminations are vehemently condemned by secular leaders. But it is shocking that the Catholic Church and its official Organizations have not responded collectively so far in spite of clear indications of caste discrimination in the Bishop’s kidnapping case in Kadapa. Arch BishopThumma Bala the president of TCBC,who quickly condemned the ‘heinous crime’ and demanded the Police and the investigating agencies to take care of the ‘safety and security of the minorities’, fell silent, once he came to know, the evil forces behind are the three priests belonging to Reddy community.

It looks as though the united strength and efforts of the leadership of the Catholic Church, come to light only when economic establishments like schools and colleges, are under threat or property tax and FCRA are discussed, not when biblical principles of justice and equality which Jesus cherished and lived for, are at stake. It is utter shame. It threatens the very trust in the One Holy Catholic and Apostolic Church. The silence of the official church is criminal; their silence speaks louder than words.

Cardinal Cleemis, the President of CBCI, who went all the way to Kolkata to meet the nun who was in distress (which was very kind of him), and to comfort her, could not find the way to Kadapa to meet and console his own brother Bishop who had to go through the agony of being betrayed and tortured by his own priests.

It is never too late. For God’s sake do something. Speak out. Silence means that you are abetting the crime and encouraging the criminals.

If you are interested, you may initiate actions that will do good to the whole Church including those suggested to you earlier in the open letter.

Note:  this article,  like all other important ones, will be forwarded to all Indian bishops for their convenient, leisurely. prayerful  reflection and action. Ccv editor