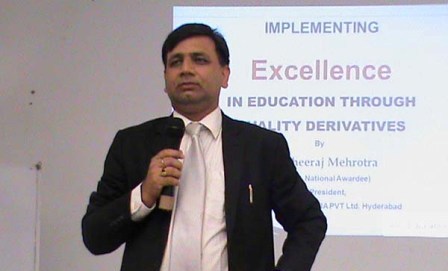 This is a very interesting report on the innovative skills of one of India's top educators who believes in straining every nerve to make education more interesting and affordable thorough use of modern apps.  Matters India deserves kudos for bringing to light all the great innovations of this great educator – Isaac Gomes.

Lucknow: Dheeraj Mehrotra, a Lucknow-based educator and recipient of the national award for teachers, has developed more than 100 Android educational apps for students, teachers and parents on one common platform.

Mehrotra says he is the first educationist in the country to have developed more than 100 educational apps for Google Playstore to bring about quality change both in teaching and learning. His apps, which he developed mostly in 2015 and a few in 2016, are listed in 141 countries. “These apps are all free apps aimed towards teachers and learners in particular to promote quality literacy for all. The best part of my apps is that it contains no advertisements at all,” Mehrotra, who was given the National Award to Teachers by then president APJ Abdul Kalam in 2006, says.

He says after Prime Minister Narendra Modi praised a Rajasthan man, Imran Khan , who made 50 mobile applications and dedicated them to students free of charge in 2015 he was motivated for developing these apps. His 18-year-old daughter Shruti—who is taking the class 12 board exam—also inspired him to develop a few apps which simplified her learning process.

“Some of my friends also found the apps to be more than useful,” Shruti told Hindustan Times.

Mehrotra says he is looking to develop apps to motivate teachers and one for students to help them handle the tense moments during the result time. He may develop one defining career opportunities for students.

A former principal at De Indian Public School, New Delhi, 44-year-old Mehrotra has a teaching experience of over two decades. He taught computer science at Lucknow’s City Montessori School till 2010.

And that’s not his only accomplishment.

To name a few Mehrotra, who works as Vice-President (Academics) at Next Education India, has a doctorate in education management, a white and a yellow belt in Six Sigma, is a certified NLP business diploma holder as well as an educational innovator and a teacher trainer.

He has authored over 40 books on computer science for ICSE, ISC, CBSE, over 10 books of academic interest for the field of education excellence and has published over 1000 papers and write-ups on academics.

Here are the top three apps developed by Mehrotra:

Six Sigma in Education: A popular concept taught in engineering and management schools has now been inserted in this educational app to bring about quality in teaching and learning process

99 School Improvement Plans: This relates to innovation in schools and helps bring out the best of practices related to school management

WoW Classroom: This app talks about how to keep students engaged in classrooms in the best possible ways and how to bring about an attitude of a rockstar teacher.