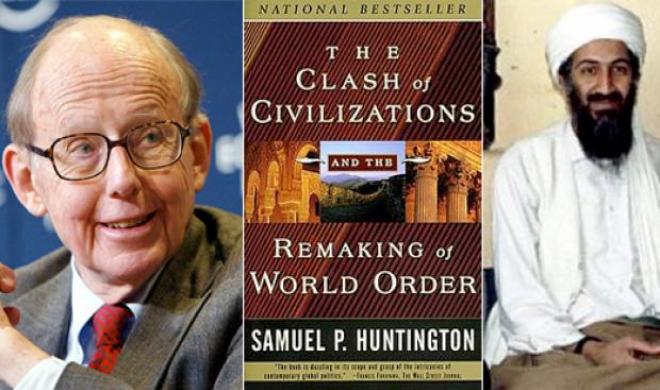 (Note: Samuel Huntington’s “Clash of Civilizations” appeared for the first time in 1993.  David Brooks published the opinion piece below in 2011 in New York times. CCV is publishing it again now because of its relevance to the ongoing or rather because of the brutal and bloody character that conflict is assuming today in US under Trump and in Europe under the anti-globalization right wing group started by Brexit.

With Donald Trump enthroned as the US president with a war cry against all Muslim immigrants, followed by the Fatwa against 6 to 7 Muslim countries, followed by several European nations bitterly opposed to Muslims who want to perpetuate their radical religious belief wherever they go and finally with Turkey president calling Germany and Netherlands fighters for a Nazi cause, are we going to witness the finale of the clash of civilizations, one exterminating the other predicted by the great American political scientist Huntington? What is this? Is this going to be the victory of the real TRUTH going through the  death of one on a cross to come out as the Resurrection for the whole of humanity?

What is being played out, all say, is the groaning of the growing triumph or birth of  Alt truth or Post truth, that is, what pleases and appeals to popular sentiments crying our “crucify him, crucify him” which finally turned out to be resurrection of the crucified. For the believing votaries of the cross, resurrection is the proof of “Truth is mighty and will triumph” while for  unbelievers it is at best a myth or at worst a mystery perpetuated by a credulous believers. Who is right?

The semifinal of the Clash of civilizations is now being played out, it looks. To know how long will this semi-final last and  who will  come out as the final victor, one will have to wait patiently, while allowing the soothsayers to be busy with their pass time of predicting the final results. We  are no soothsayer! We just don’t know what will happen tomorrow. The mills of the supreme Power grinds smoothly, but it grinds for a happy out come.

Till recently, that is till the end of Obama era, the clear trend was for unity, universality and globalization driving humans to become one family under a fortified UN. All believed we have to hang together or hang separately; that interdependence is far more important than independence as none of us  are self-sufficient; that equality of all humans irrespective of class, cast, creed, colour, community or county is an undisputable truth; that racism based on colour  —  white, black, blown, yellow or any shades of them  — should have no place in human society;  that belief in one God or a multiplicity of Gods or no belief in any is the fundamental right of every human.

These universally accepted principles are now questioned with the cry of President Trump, “my country right or wrong must go it alone” to make his country the greatest  even at the cost of other countries. Being the executive of the riches country in the world, too many people and nations becomes his followers following the maxim: “When money speaks all listen!” Is this reverse trend inevitable or accidental, long lasting or transitory? Inevitable when human progress reaches a dead end or cul-de-sac due to over speed; temporary till one gets over the fatigue of over speed to rest, reflect and evaluate the gains and losses of the progress made so far.

The darkest hours are just before the dawn, they say. May

be we are just passing through those  hours to wake up to a new dawn of post religious, post racist humane humanity ready to accept the other, not as the other but as our own on an equal footing as brother and sister of one human family. james kottoor, editor)

Samuel Huntington was one of America’s greatest political scientists. In 1993, he published a sensational essay in Foreign Affairs called “The Clash of Civilizations?” The essay, which became a book, argued that the post-cold war would be marked by civilizational conflict.

Human beings, Huntington wrote, are divided along cultural lines — Western, Islamic, Hindu and so on. There is no universal civilization. Instead, there are these cultural blocks, each within its own distinct set of values.

The Islamic civilization, he wrote, is the most troublesome. People in the Arab world do not share the general suppositions of the Western world. Their primary attachment is to their religion, not to their nation-state. Their culture is inhospitable to certain liberal ideals, like pluralism, individualism and democracy.

Huntington correctly foresaw that the Arab strongman regimes were fragile and were threatened by the masses of unemployed young men. He thought these regimes could fall, but he did not believe that the nations would modernize in a Western direction. Amid the tumult of regime change, the rebels would selectively borrow tools from the West, but their borrowing would be refracted through their own beliefs. They would follow their own trajectory and not become more Western.

The Muslim world has bloody borders, he continued. There are wars and tensions where the Muslim world comes into conflict with other civilizations. Even if decrepit regimes fell, he suggested, there would still be a fundamental clash of civilizations between Islam and the West. The Western nations would do well to keep their distance from Muslim affairs. The more the two civilizations intermingle, the worse the tensions will be.

Huntington’s thesis set off a furious debate. But with the historic changes sweeping through the Arab world, it’s illuminating to go back and read his argument today. In retrospect, I’d say that Huntington committed the Fundamental Attribution Error. That is, he ascribed to traits qualities that are actually determined by context.

He argued that people in Arab lands are intrinsically not nationalistic. He argued that they do not hunger for pluralism and democracy in the way these things are understood in the West. But it now appears as though they were simply living in circumstances that did not allow that patriotism or those spiritual hungers to come to the surface.

For most of the past few decades, people in Arab nations were living under regimes that rule by fear. In these circumstances, most people shared the conspiracy mongering and the political passivity that these regimes encouraged. But when the fear lessened, and the opportunity for change arose, different aspirations were energized. Over the past weeks, we’ve seen Arab people ferociously attached to their national identities. We’ve seen them willing to risk their lives for pluralism, openness and democracy.

But it seems clear that many people in Arab nations do share a universal hunger for liberty. They feel the presence of universal human rights and feel insulted when they are not accorded them. Culture is important, but underneath cultural differences there are these universal aspirations for dignity, for political systems that listen to, respond to and respect the will of the people.

Finally, I’d say Huntington misunderstood the nature of historical change. In his book, he describes transformations that move along linear, projectable trajectories. But that’s not how things work in times of tumult. Instead, one person moves a step. Then the next person moves a step. Pretty soon, millions are caught up in a contagion, activating passions they had but dimly perceived just weeks before. They get swept up in momentums that have no central authority and that, nonetheless, exercise a sweeping influence on those caught up in their tides.

I write all this not to denigrate the great Huntington. He may still be proved right. The Arab world may modernize on its own separate path. But his mistakes illuminate useful truths: that all people share certain aspirations and that history is wide open. The tumult of events can transform the traits and qualities that seemed, even to great experts, etched in stone.

(A version of this op-ed appears in print on March 4, 2011, on Page A27 of the New York edition with the headline: Huntington’s Clash Revisited.)