This photo sums up Trump’s assault on women’s rights 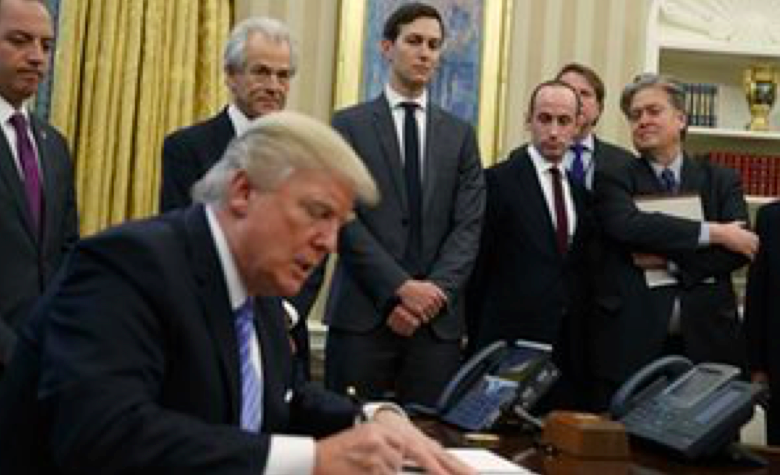 After a weekend of inspiring protest, we had to watch the world’s most powerful man sign away the reproductive rights of women in developing countries

(Note: The first executive order of  the US president was to demonstrate his fury based on his religious conviction against those who promote or practice abortion by re-imposing the Gang Rule, which in fact means cutting off, of all aids especially to very poor countries in Africa infested with aids, unwanted pregnancies and sex related diseases.  He considers as an enemy even those who speak  about abortion, let alone those who use their own funds to get it done.

This article from the Guardian in UK and many others are furious in criticizing Trump, where, the conservative sections in the Catholic Church starting with New York cardinal are all very happy. Because of the furious opposition in the media across the world they may not express their views publicly. When Benedict the XVI, visited Africa as Pope and said something silly about condom, the famous Paris Magazine depicted him with a condom as his head cover. Recall also the fury created in the world press when abortion was denied to a lady in Ireland by the Catholic Church which later apologized red faced and admitted that abortion is allowed  to save the life of the mother.

As soon as the Gang rule was signed some country in the European Union has already initiated action to set up another fund  in its place to help poor nations especially in Africa.  In dealing with these personal moral issues the supreme rule is commanding dictates of one’s own conscience which is above every authority in this world, even above the Pope as stated also by Benedict himself, which we quoted here before. Therefore all those who are fighting against it in the name of tradition or defined church principles are likely to end up with egg on their faces only. There is so much public fury against such past teachings of the Catholic church.

Equally controversial is the second executive order the President signed, namely, to start construction of the wall separating US and Mexico. But all of us can afford to wait patiently, as the world’s beloved Francis advises, until he starts executing his orders. “Rome has said and world-wide discussion has started,” it used to be said  ridiculing Papal orders.  Now the whole world is looking at US President Trump, to see what order he gives next to make fun of him, half in joke, half in right earnest. james kottoor, editor.)

Look at these men. Look at them. Gathered around the most powerful man in the world – a man who has openly bragged of sexual assault, who refers to a vulva as a woman’s “wherever” – as he signs away the reproductive rights of women in developing countries.

In reimposing the global gag rule, Donald Trump is removing US funding to any overseas organisation that offers abortions, even if the organisation provides those specific services with their own funds. It means that doctors, midwives, nurses and volunteers cannot so much as mention the word “abortion” to their patients and service users without risking the loss of the US funding they receive for services including the supply of contraceptives. Trump once said women should be punished for abortion. Now, he's making it happen

If there is a woman present in this room, as this executive order is being signed along with two others, she is not included in the shot. This photograph is what patriarchy looks like – a system of society or government in which men hold the power and women are largely excluded. Nothing quite says powerlessness like the removal of your right to bodily autonomy, at the behest of a group of people who will never – can never – know what that feels like.

There’s a reason women are using the word patriarchy again, that it featured on so many signs during the Women’s Marches, and it is not, as ridiculous outrage automaton Piers Morgan asserts, because they are rabid feminists intent on emasculating men. Because – and I hate to break this to Piers – if you are emasculated by the notion of a woman making her own reproductive choices, then you were never much of a man to begin with.

What do any of these men know of women? I doubt the men in that room have ever so much as held a tampon. I doubt they’ve made their wives or girlfriends a hot water bottle, or changed her bloody sheets, or volunteered to go down to the drugstore to buy her maxi pads when she’s doubled up in pain and cursing her ovaries. If you left an IUD on the president’s desk, he’d probably assume it was a tiny little pen made especially for him. He’d pick it up and attempt to use it to sign his name, no doubt at the bottom of some other piece of legislation that will profoundly and irreversibly affect women’s lives.

Look who’s in charge now, this picture says.The smirks on some of their faces may say it all. Call me paranoid if you like, but the fragility of the president’s ego does not exclude the possibility that he is enjoying an act of petty revenge against an entire gender, millions of whom took to the streets over the weekend because the very fact of this man’s unmatched global power says more about women’s continued oppression than a feminist treatise ever could. Look who’s in charge now, this picture says.

The stupidity of the blinkered, religiously motivated agenda on display here is that no matter what legislation these men implement, they will never succeed in banning abortion, per se, only safe, legal abortion. Marie Stopes estimates that, as a result of the reimposition of the global gag order, the loss of their services alone could result in 6.5m unintended pregnancies during Trump’s first term, 2.1m unsafe abortions, and 21,700 maternal deaths. In passing this law, these patriarchs have fathered millions of unwanted children, helping to create lives that could very well turn out to be painful and potentially motherless.

The rage I feel towards these men is white-hot. I want to force them to carry an unwanted pregnancy to term, so they can understand. But they never will. As my colleague Martin Belam has said, as long as you live you will never see a photograph of seven women signing legislation that defines and controls what men can do with their reproductive organs. It is unimaginable.

Martin Belam(@MartinBelam)As long as you live you'll never see a photograph of 7 women signing legislation about what men can do with their reproductive organs pic.twitter.com/dXjfVjnRiXJanuary 23, 2017

The global gag rule has long been used as a political football. It was introduced by Ronald Reagan in 1984, revoked by Bill Clinton, reinstituted by George W Bush, then revoked by Barack Obama. According to the Guttmacher Institute, reporting on the findings of a research initiative by NGOs, when George W Bush reimposed the global gag rule, the US agency for international development was forced to cut off shipments of contraceptives to 16 countries in sub-Saharan Africa, Asia and the Middle East.

At the time, one in four women in Lesotho were infected with HIV. The contraceptive shipments to Lesotho Planned Parenthood – the only available conduit for condoms in the country – ended as a result of Bush’s actions. He created more unwanted pregnancies, and more babies with HIV. Trump’s act is likely to do the same.