The Great Chanakya Who Saved The Catholic Church In India. 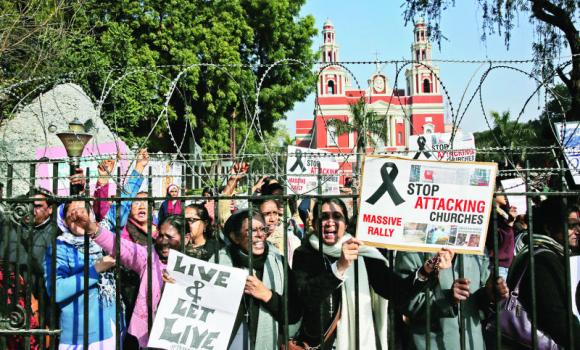 During the last few months, the Catholic Church in India was going through a very traumatic situation. There were about six incidences of Churches in Delhi desecrated by the hooligans belonging to some enemies of the Church. The Catholic community in Delhi though expressed their anguish in various forms of protests, the police in Delhi talked about these incidents as simple robberies and minor mischiefs  and nothing more. No serious action was taken against anybody. The political and govt authorities kept complete silence about all these. The community felt anxious about the goings on, not knowing what is expected the next. A sort of fear psychosis was growing among the members of the community.

It is at this time, our Great Chanakya, the Syro-Malabar church,  played the master stroke. They invited both their newly declared saints of Syro-Malabar rite Fr. Kuriacose Elias Chavara and Sr. Euphrasia to Delhi to bless the Prime Minister Mr. Modi in a grand function at vijan Bhavan. Having received their blessings, the P.M. thundered from the Stage that he and his govt will not tolerate any form of religious intolerance in this Country. He praised the two saints for their selfless service to the society. He also quoted from our constitution about the religious equality and the freedom of any person in the country to have the faith he or she prefers. Lo! And behold, from that day no churches were desecrated in the capital city or in the capital region. Is it not a great service to the Catholic Church from the Syro-Malabar church?. Did not they move the unmovable mountain? Did they not succeed the silent lion roar?

This is a great lesson in Diplomacy by the diplomats of our Syro-Malabar Church in Delhi.

The violence to the Church buildings have stopped in the capital. But within two days Mr. Bhagat, the R.S.S. chief declared that the main aim of Mother Teresa’s Mission was conversion. Mr. Tagodia declared that Ghar vapasi is their right and V.H.P. organized many functions of mass conversion from Christianity and Muslim to Hinduism. Whether they were genuine conversions or drama is a different question. Sadhus and Sadvis who have taken vow of celibacy have asked all the Hindu women to conceive more children to change the demographic map of this country.

Any amount of people criticising Mother Treasa will not affect the nobility of her work in the eyes of God, in the eyes of people who worked with her,  the people who received her service or even those who have heard, read about or seen her work. Most of the people who criticize her will not dare to do the same type work she did for humanity either for money or even for the propagation of their own religion.

As far as the Hindu women conceiving more children are concerned, nobody needs to worry. It is not going to affect any religion. The new born babies are all brothers and sisters of every human being. Let us welcome more of God’s children into this world.

If you want to stop all these kinds of devilish activities, Our Great Chanakya has showed us a way.

These are only sample suggestions. In each locality, the hierarchy and congregations must make a list of all people who work against the church in their own locality and invite them in prominent functions of the Church as chief guests. The feasts of the churches, the school functions etc are only few possibilities. The local people and the hierarchy are intelligent enough to select the type of key people.

The whole of India will be having inter- religious harmony and love.

Wish you all the best and let us express our sincere thanks to the Great Chanakyas, the saviors of the Church. We would also like to request these great Chanakyas  and their  ilks to find a way to make our Catholic Church one and only Catholic Church united in the mystical body of Christ.