Suffism and Modiji – PM’s Followers Must Heed Message of Peace 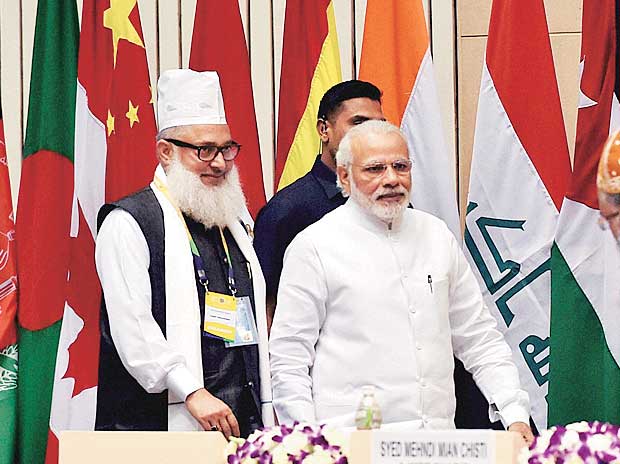 (Note: PM’s speech at  the  Suffi meet was superb. He went out of his way to extol the fine spiritual elements of Suffism, an offshoot of Islam, which are unity, peace and compassion and the audience applauded him. But the problem is his own followers the RSS and the Sanghparivar. Because of their low level of education they are unable to grasp his message. To make them understand his message he has to use a different language as one would use to disciple immature kids. For that he has to take  them to task when Muslims are attacked or even murdered, for unrelated things like eating meat or taking care of

buffalos. If these illiterates can’t grow up to civilized ways of behavior they should be forced to keep their mouths shut using even law enforcement agencies, instead of allowing to spread hatred against Muslims as a community and Islam as a religion.  james kottoor, editor)

Prime Minister Narendra Modi’s speech at the World Sufi Forum that concluded in New Delhi on Sunday was easily one of the best from him. He covered a vast expanse of thought and knowledge to hammer home the point that the Islam that gave rise to Sufism, that found a ready soil in India, could never be a religion of terror or violence. In fact, among the 99 popular appellations used for Allah, not one referred to violence. Rather, the most commonly used sobriquets extolled His virtues of mercy and compassion. Modi’s attempt was more to change the mindset of those who saw Islam as a synonym for terror. Yet, he did not flinch from stating that billions of dollars were spent every year to fight terror, the money that should have been spent on providing food and shelter.

Modi used the occasion to emphasise that the basic principles that guided all religions were peace and harmony. He also sought to remove the impression that the instrument with which Islam spread in the country was the sword, not Sufism. He could not have been oblivious of the fact that the first mosque in the world outside of Arabia was built at Kodungallur in Kerala. Since Modi’s speeches are heard with rapt attention by millions of people who voted for him in the 2014 elections, the message would surely have impacted them. That could have been his purpose in choosing this forum to speak on Islam. Alas, a section of his supporters has come to believe that the arrival of the BJP in power is an occasion for Islam-bashing.

Without mentioning Pakistan, Modi also spoke about agencies and forces which fanned terrorism the world over. In India, too, there are forces which try to pit one section of the people against the other in the name of religion. Though vast sections of the people have never approved of violence as a policy, they sometimes become victims of false propaganda. That is what happened when, on the basis of false propaganda about cow slaughter, a middle-aged Muslim was lynched to death in UP. If such people do not draw the appropriate lessons from the Prime Minister’s speech, nothing should prevent the government from disciplining them.