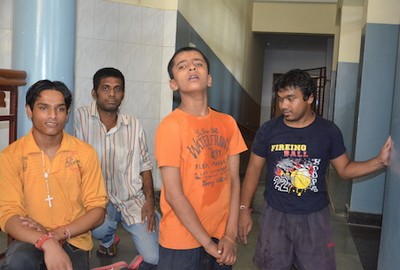 Residents at Deepashram, an orphanage run by Missionaries of Charity Fathers in Gurgaon, India. (Photo by Ritu Sharma).

Gurgaon (UCAN): Sept. 5 should be a great day of celebrations for the Missionaries of Charity , but for the fathers branch of this religious institute founded by Mother Teresa, celebrations this year are overshadowed by a lack of funds to keep their work among the poor afloat.
Deepashram (House of Light), a home for orphan children with mental illness in Gurgaon, on the outskirts of New Delhi, is barely able to keep running.
Missionaries of Charity Father Jerry Michael, the house superior, told ucanews.com that no government agency or nongovernmental organization has come forward to support them.
They manage from small donations from people in Gurgaon or surrounding areas who also come to sponsor breakfast, lunch and dinner for these children, he said.
People like to donate on special occasions such as their birthdays, marriage or death anniversaries. This means “we arrange from what ever we have" so that the children do not starve, the priest said.
Moreover, the children are on regular psychiatric and epileptic medicine that alone costs 25,000 rupees (US$ 378) per month that often needs upgrading, said Father Michael, who has worked at the house for the last 15 years.
Besides Deepashram, the congregation has Anand Ashram (House of Happiness) in Gurgaon, Shantidan (House of Peace) in the southern Indian state of Kerala and Vidya Bhawan (House of Education) in eastern Indian Jharkhand state that caters to people with mentally illness.
Father Benedict, the regional superior who supervises all four houses, told ucanews.com that almost all of the donations received by Deepashram are from non-Christians.
"That is the only source of income. Some months it is less and some it is more. There is no fixed pattern," he said.
Father Benedict said that people donated everything in the house from tables, chairs to beds and water coolers. "Sometimes even the medicines are sponsored," he added.
Mother Teresa's legacy
Mother Teresa inaugurated Deepashram in 1994. The Church will be celebrating the feast day of Mother Teresa, now Blessed Teresa of Calcutta, a symbol of preferential love for the poorest of the poor.
She died at age 87 in Kolkata (formerly Calcutta) on Sept. 5, 1997. She founded in 1950 the Missionaries of Charity Sisters, and later the brothers and fathers branches.
All share in the charism of Mother Teresa to develop personal holiness by working for the poorest of the poor.
During her lifetime, Mother Teresa became popular for helping the sick and the poor. Her work grew from a single house to become a worldwide presence during her lifetime. She was awarded the Nobel Peace Prize in 1979. She was beatified in 2003.
While the world commemorates her death and legacy, the fathers branch of the congregation she founded is finding it hard to continue the work she began.
Deepashram looks after orphaned and unwanted children from hospitals. Some residents were found living on the streets and others were brought by local police, Father Michael said.
The home has a dormitory, a kitchen and a dining room along with a chapel and a separate ward for the sick. Children who develop illnesses are shifted to the infirmary until they recover.
Kanchan Makkar, one of the home's donors, said it is people's duty to support the Missionaries of Charity.
"We are giving only a few minutes for donation but they have given their whole life for the service of these children. There is so much love and affection in their work," Makkar, who on this visit had donated a bag of flour, some bananas and biscuits, told ucanews.com.
Source: UCAN