Pope pushing for change – Now church must catch up 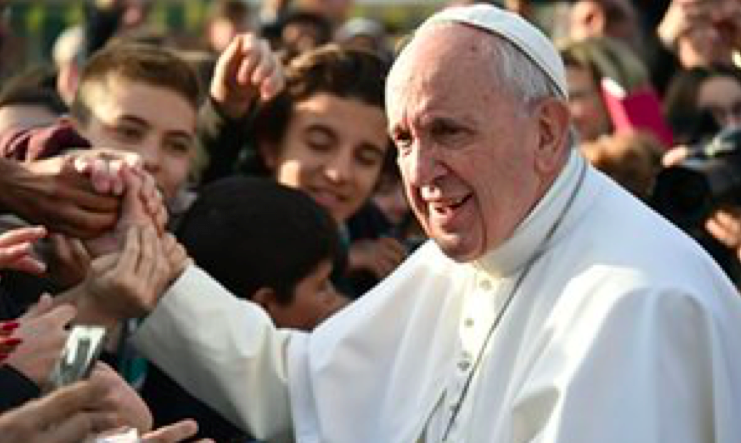 From the ordination of married men to female deacons, the pope is proposing reforms that even diehard conservatives should admit the church needs

‘Pope Francis set out first to be a living and credible witness to the values that are at the heart of Christianity.’ Photograph: Alberto Getty Images

(Note: On March 13 Francis completed four years. Even in his 70s he has unleashed a storm; he did what he told youngsters  to do: ‘Make a mess’ of the Church. Only when all outdated stuff, of past “sell by date” are pulled down one can pick up items which have ‘sell value’ and put on the shelves.

Those used to ‘don’t shake the boat’ can’t tolerate this and so are trying to stop messing up or praying for is his death of late. Those fed up with the outdated past are begging him: ‘Please don’t die’. Since he can’t do things alone, he is busy picking up bishops of his vision and searching for ready labourers to do the dirty  work of rearranging the house – as is done by Biharies and Bengalies as in Kerala (willing married priests and deacons, in church terminology) to get on with the crying need for change and reform.

Being a man of Charisma even atheists swarm around him like honey. Francis now wants to give that look to his church as an agent of ‘love, compassion and enticing mercy’ which is sure to draw the whole of humanity to itself. There is no reason why he should not succeed. A drop of honey is sure to attract more bees than a barrel of vinegar. james kottoor, editor)

There aren’t many jobs that can pluck a man in his late 70s out of obscurity and make him a global figure. That’s what happened four years ago, when a smiley Argentinian man appeared on a balcony in Rome and bade the world good evening. I was there in the crowd in St Peter’s Square, sandwiched between an Australian nun and a Canadian prelate.

The nun and I had no idea who the man on the balcony was (there is very little in the way of explanation on blockbuster Vatican occasions – the thrill is in the show, and mystery is part of the sell) but after a few minutes, the Canadian tumbled it. “That’s Bergoglio from Buenos Aires,” he said. “What will he be like?” the nun and I asked him. “No idea,” said the bishop.

Well, the whole world knows now. Pope Francis set out first to be a living and credible witness to the values that are at the heart of Christianity, and second, to reform an institution that the whole world knows is in dire need of change (he took the name Francis as pope in honour of the saint whose opus magnum was to do the same).

Four years on, how is he doing? On the first ambition, he’s been a runaway success: even hardened atheists have become fond of him. Unlike his bookish predecessor, Francis oozes charisma. He doesn’t seem to be hiding behind anything. One of my favourite moments of his pontificate is when he completely lost his rag with a crowd of Mexicans who pulled him on to a child in a wheelchair and shouted angrily at them. I also loved his recommendation that we ought to give our money to beggars in the street, and who cares if they’re buying alcohol, because that glass of wine might be the only good thing that happens in their day? Francis gets to the heart of things – and isn’t afraid of saying that he’s a sinner himself.

All this, it seems to me, speaks to the world about the values of Christianity, and makes you think that at its heart, it’s not about a belief in dogma or tradition or priests or church services, thank God – it’s about a story that unites humankind with something outside of ourselves, a story that gives us the chance of being healed and renewed, and a story that puts kindness and care for others at the centre of everything we do.

More than 2,000 years ago, the machine that became the Catholic church offered itself as the protector of those values; with every week that passes its credentials seem to be getting thinner. Francis is trying to rebuild his church, but to say this is a mammoth task is an understatement, and all the indications are that, to use his own analogy, he seems to be rowing his boat in one direction while others on board are pulling the oars the other way.So four years on, what is the Argentinian pope going to do next?

That’s certainly how it seems on issues such as the treatment of paedophile priests – Marie Collins, who resigned recently from the Vatican’s child protection commission, said Vatican bureaucrats were stalling reforms, a view echoed by a senior Australian Catholic official.

Then there are the reforms he seems to be pushing for, such as the ordination of married men (this in a church where there is no requirement for celibacy, but where celibacy has long been the norm, and which is now faced with a growing shortage of recruits to the priesthood), and the ordination of women to the diaconate (this is a rung below the priesthood, and it seems fairly clear that in the distant past, women fulfilled this role – so why not again?).

On married priests, Francis has opened the door for further debate; on women deacons he has established a commission. So far precisely nothing has come of either– but there is a lot of noise inside the church against these sorts of changes, and it seems pretty clear that plenty of those same bureaucrats who are busily trying to undermine the child protection commission would roll up their sleeves to prevent the ordination of either married men to the priesthood, or women to the diaconate.

So four years on, what is the Argentinian pope going to do next? What about his ambition to reform the church? The last person a pope is going to listen to is a British laywoman, but if I were him I’d ratchet up that women commission, and start the ball rolling on ordaining married men. Many of us out here are rooting for him on these changes – and even the most diehard conservatives know that if there aren’t enough priests, new measures must be taken. It is more important to have people who can celebrate the eucharist that is at the centre of the Catholic faith, than it is who those people are. This is the moment for change, however rocky Francis’s boat is going to get in the process.