Lucy is our Global SISTER, Do you wonder why? 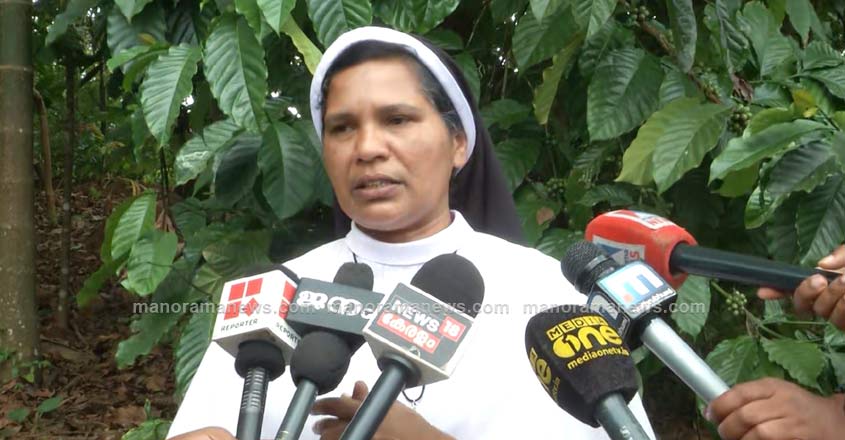 Yes, thanks to Syromalabar Hierarchy, united against Sr. Lucy Kalapura, justifying her expulsion from her convent for no culpable offence of hers, and putting their whole weight and support for sexually accused Bp. Franco, Frs. in the Abhaya case, Robin, Noble and a whole lot of priests, it is abundantly made clear who are the hypocrites par excellence and who the innocent.
Thank you bishops and priests under court trial, for giving Sr. Lucy, under no such trial, Global visibility. Let the “voice of public opinion increase and multiply to canonize her already alive.” s some of our fellow Christians are perplexed. Here is the reason why…. Sister Lucy is under expulsion from her Convent. The bishops of the Syro-Malabar Synod are in full agreement that she should be cast out. But…

(Fr.) Robin, who raped and impregnated a teenage girl and tried to bribe her father into taking on the blame for it, is not cast out. He is still a priest, though cooling his heels in prison.

A rape-accused bishop is still a powerful ‘authority’ in church circles, carrying a lot of weight and, beyond that, a great deal of wealth. I don’t have to, fortunately, name him…

(Fr.) Noble – think of the name! – who committed the crime of defaming Sister Lucy by posting a mischievously suggestive video aimed at character-assassinating her, continues to be a blue eyed boy of the church; whereas he deserves to be a social outcast.

The accused priest and his associates in the Abhaya murder case are, likewise, within the ambit the church’s inclusion.

Most people think this is strange and cannot be justified. They do so, I believe, because they don’t understand how ‘the system’ operates.

What matters to the church hierarchy is not spirituality, or moral uprightness, or exemplary behaviour. The foremost virtue for them is that a priest, a nun should be readily and completely amenable to their control. This is taken to be discipline.

What all of us need to understand clearly is that this breeds raging hostility to every authentic expression of personal spirituality. Sister Lucy’s case is clearly illustrative of it. That’s why I urge you to study it carefully for yourself.

Not even the most ardent tormentors of the nun would believe that they are more spiritual or Christian than Lucy. Or, that they are superior to her in any way. What they hate in her is the spirit of freedom. She believes, like most of us, that freedom is God’s gift to human beings. Christ came to set the captives free. Slavery should not be justified under discipline. Christians cannot be, should not be, slaves.

Such spirituality is nightmare for the ‘authorities’. The reason is simple. Individuals who are spiritual in this sense cannot be controlled like puppets. Anything less than this makes the church authorities highly insecure. This is very natural. Control freaks become restless in the presence of anything, or anyone, they cannot control completely. This was the problem Jesus posed to the Jewish authorities. The result is known to all of us.

Now let me state the obvious. Those who inflict their suffocating authority over others, and degrade them into soul-less slaves, have nothing to do with Jesus Christ or the Way of Life he gave to the world. Jesus prescribed “self-denial’ –which is the opposite of control-mania- as the basic discipline of discipleship. Church magnates and oligarchs are swollen with self-importance. They are drunk with power, and deadened by sensual delights of diverse kinds. It is a deadly combination. It abounds in hypocrisy.

Bishops who are gleeful that Sister Lucy is cast out for owning and driving a Maruti Alto travel in Mercedes Benz, BMW and other high-end, luxury cars. They think they are entitled to this hypocrisy.

As a matter of fact, their only marker of superiority lies in this. So, if Sister Lucy owns even the humblest cars, it dents their importance disproportionately. The essence of elitist hypocrisy is that you have a privilege that is disallowed to others.

So, the issue is not that Sister Lucy drives a car, or writes poems, or uses her creative imagination in teaching students. The issue is that her personality troubles those who don’t have any, other than the feeling of importance borrowed from a system. She is vitally alive, whereas her superiors are desiccated specimens of officialdom. She radiates life. They radiate anxiety.

It is a case –to borrow the words of George Orwell- the envy of the ghost for the living.