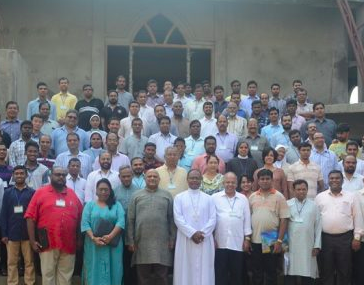 (Note: It is fine that Christian Philosophers have finally decided to respect the dignity of other belief systems in India. At the same time, it is sad that it took so many years for them to realise the truth. The damage semitic religions have done to the peace and serenity in India is serious. The recent Syro Malabar Church proposals to accept other religions are welcoming. Still we are not ready to speak out the truth that people outside the periphery of SMC also are eligible for Gods mercy. It may take many more decades for the charismatic preachers to return to this reality. A close analysis may reveal that it is with Indian thoughts and thought schools that Christianity best matches. Let this be the beginning of a revolutionary evolution in the Church. Many times I feel that Pope Francis is a Divine choice. Read the Matters India report. Joseph Mattappally Asso. Editor –CCV) Guwahati: The Association of Christian Philosophers of India (ACPI) has resolved to promote openness and to tolerate views of others that challenge even their beliefs and ideologies in order to maintain freedom, equality and inclusive development in the country.

“We denounce communalism and religious fundamentalism which are rooted in fear, greed and hatred and destroy the secular fabric of our nation. The dignity of every human is to be strongly affirmed and not to be sacrificed at any altar, be it political, religious, cultural or economic,” the association concluded at its 42nd annual research seminar.

As many as 90 philosophers from around the country attended the meet at the headquarters of the Fransalian priests’ northeast province in Guwahati, Assam. The October 24-27 seminar addressed the theme, “Indian Hermeneutics of Suspicion.”

The participants agreed that tolerating opposing views and engaging others in “fruitful dialogue” will help them arrive at the truth. “Inclusiveness, transparency, liberal thought, openness to revision are some of the major governing principles of a hermeneutics of suspicion,” the final statement says.

Underscoring Indians’ openness, tolerance and respect toward all, the seminar bemoaned recent attempts by the powerful to control and manipulate truth to suit their vested interests. They applauded India for fostering peaceful coexistence of cultures and religions and absorbing and assimilating varied ideologies and contradictory philosophies.

“However, in recent times, we witness intolerance and violence toward those belonging to minority communities, Dalits, tribals and people, who express dissent. Fundamentalist and communalist tendencies leading to totalization which claims control and monitor what we eat, think, believe, profess and express are on the rise,” the philosophers regretted.

Those who challenge the powerful are ignored, marginalized, controlled, silenced or even assassinated, they noted.

In his keynote address, Ram Puniyani, a renowned champion of communal harmony and human rights, noted serious threats to India’s long standing culture of pluralism and diversity. If communal unrest and “unnecessary divisions and suspicions” are left unchecked the country will face a complex set of problems, warns the 72-year-old former professor of biomedical engineering who took voluntary retirement to promote harmony in India.

The problems could include mistrust of others, domination of the powerful over the weak, social unrest and violence, poor economic development and a loss of international soft power, explained the former senior medical officer affiliated with the Indian Institute of Technology Bombay.

Archbishop John Moolachira of Guwahati, the chief guest at the opening function, affirmed the need for thinkers and movements to provide an ongoing positive and constructive critique, so as to improve upon personal wellbeing, healthy social relations and the common good.

The participants agreed a hermeneutics of suspicion challenged them to engage in self-critique. “Subsequently we can honestly engage in critiquing perpetrators of divisive ideologies and false propaganda,” they added.

While the term “suspicion” seems to have negative connotations, when understood and employed positively, suspicion is oriented toward the enhancement of personal and collective wellbeing. Some of the affirmative governing principles of a hermeneutics of suspicion involve inclusiveness, respect for others, transparency in communication, freedom of thought and expression and an openness to revision of texts and traditions, the statement says.

They resolved to follow the examples of B R Ambedkar, Periyar E V Ramaswamy, Narayana Guru, Pandita Ramabai and other such Indian “masters of suspicion,” who critiqued texts, beliefs, practices, traditions and ideologies that perpetuated ignorance, fear, division, violence and marginalization of the poor.

“Rooted in a culture of trust, with liberty and justice as wings, we envisage a hermeneutic of suspicion which is prophetic, transformative, gender-neutral and promotes sustainable development,” they asserted.

The philosophers warned that societies would become obsolete and decadent without dissent and critical thinking. “While the rest of the world moves ahead, such societies become regressive and underdeveloped. It is hoped that conferences such as these will help to promote an enlightened collective consciousness which will prevent such regression to take shape,” they added.

Diversity and plurality, they asserted, are not a problem, but an opportunity. “In diversity, even those on the periphery have a place and role and allowing them to flourish becomes the real test of freedom,” the seminar said and added, “True progress is the outcome of the alliance of civilizations, and not the clash of civilizations.”

The participants have resolved to constitutional right to freedom of expression and reclaim their freedom to express dissent in a peaceful manner without being silenced. “We support the right of the media to be independent of all types of coercion and to report freely and fairly.”