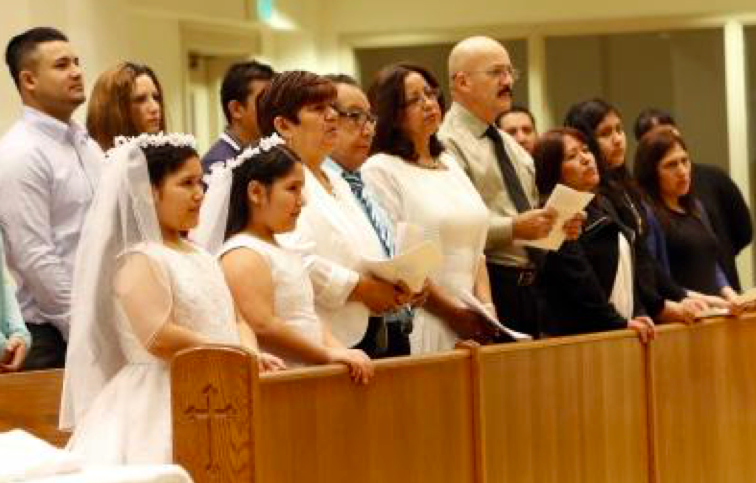 Twins Lisbeth and Lisseth Cano, 8, attend Mass April 2 with their family at St. John of God Church in Central Islip, N.Y. The girls were baptized, confirmed, and received their first Communion at the liturgy. Pope Francis' postsynodal apostolic exhortation on the family, "Amoris Laetitia" ("The Joy of Love"), was released April 8. (CNS photo/Gregory A. Shemitz)

(Note: If the  papal exhortation is not  all about window dressing, making one “feel good” and  not “be good”, aren’t we fooling ourselves or those who are in “irregular situation”? By not using that phrase or substituting it with a belabored explanation that they really belong to the Church,  and  that we all should join in this effort, does their situation  cease to be a case of not “living in sin” just because that self accusing phrase is not used? It means, it is all talk and no change, no substance, just the opposite of  calling a spade a spade. It is just old wine in new bottles for people who think for themselves. Giving final say to one’s conscience is excellent, but not to a conscience formed with the aid of a celibate battalion of the Church which has a vested interest in the final out come, in spite of the assertion that the church is not there to replace or substitute the conscience of those in irregular situation. Why doesn’t the church advise them to seek the help of any enlightened person, celibate or married, Catholic, agnostic or even an atheist? An enlightened  guide need not be an agent of the Church. In the final analysis all  moral issues must be  finally settled prayerfully before  one’s own conscience which is the God for each individual.  This is also  the meaning of the Lord’s statement  to the woman at the Jacob’s well: “Time has come

when one should worship God, not in that mountain or this, that temple or this, but in spirit and truth in the cave of one’s own heart” which is different for every one born of man and woman in this world. That is what sensible people in the world at large are doing.  The church has to come round to accepting and understanding them, not judging or condemning them. james kottoor, editor)

On Friday, April 8, Pope Francis’ long-awaited apostolic exhortation on the family and love, “Amoris Laetitia” (“The Joy of Love”), was released. The exhortation includes not only the pope’s reflections but also insights from the meetings in 2014 and 2015 of the Synod of Bishops. In this thorough analysis of the theology of the family and of the challenges families face in today’s world, the pope sets a pastoral agenda that should keep Catholics busy for a long time. The letter does not change any doctrine, but it represents a change in tone on some issues. It emphasizes mercy and understanding and acknowledges the complexity of human experience that too often has been overlooked, particularly when the church discusses family situations that “fall short of what the Lord demands of us.”

“The Joy of Love” gives necessary attention to reaffirming core teachings on marriage while facing today’s complicated reality. The exhortation sees Christian marriage as a reflection of the Trinity, with its relationships and generativity. But there are significant challenges to the theological ideal: Our world changes quickly, and permanent commitment is often devalued.

When it comes to forming healthy marital relationships, the pope admits that the church has not always helped matters: “We often present marriage in such a way that its unitive meaning, its call to grow in love and its ideal of mutual assistance are overshadowed by an almost exclusive insistence on the duty of procreation” (No. 36). And we have failed to give the right guidance to young married couples with their own “timetables, their way of thinking and their concrete concerns.” Francis reflects on the gift of raising children but also pays attention to the extended family—to grandparents, to other elders, to people with disabilities or other special needs and to in-laws—and speaks to the need for the family to be a part of a larger community. The document also notes the need for couples to adjust as they age together.

In a most important section, while never denying the need to strive for the ideal, the pope urges patience and mercy for those whose marriages have failed. They need to be included in the community; they need the church’s ministry. They are part of our church family. When he says that it is “important that the divorced who have entered a new union should be made to feel part of the church” (No. 243), this is not a throwaway line. It is a call to action. Francis briefly addresses same-sex couples as also deserving respect and inclusion without redefining marriage. And he wants to abandon the old formulation “living in sin.”

Francis also reminds Catholics that “individual conscience needs to be better incorporated into the church’s practice in certain situations which do not objectively embody our understanding of marriage” (No. 303). That is, the traditional belief that individual conscience is the final arbiter of the moral life has been forgotten in these cases. The church has been “called to form consciences, not to replace them” (No. 37). Pastors, therefore, need to help people not simply follow rules but to practice “discernment,” a word that implies prayerful decision making.

Catholics need to read this letter, to meditate on it, to ponder its insights and implications and to make moves in our parishes and schools and other organizations to draw on its wisdom with concrete action. Much of the content could be integrated into parish discussions, speaker series, pastoral programs and marriage preparation or counseling. The pope is calling for “new pastoral methods,” and the church should think creatively. Pastors and other leaders must reach out to those who struggle, those who are hurting, those who have survived failure; they need to understand difficult and complex situations and show that they truly care. Priests and other members of the clergy, seminarians, religious, pastoral staffs and catechists need adequate formation. Pope Francis is urging communities to move beyond concern for the family in the abstract to becoming active agents in the family apostolate.

Simply put, Pope Francis is pointing out the need for greater pastoral sensitivity regarding marriage and families, especially those in “irregular situations.” Realizing the complexities of modern life, the pope is asking for greater discernment by everyone, laity and clergy alike. Marriage and the family are cornerstones of society and should be given the serious reflection they deserve. Family life is more than just a “topic”; it is a vocation that needs thoughtful and prayerful support.

“Amoris Laetitia” is a beautiful gift to the church, a call to a change of heart and a summons to prayer. Authentically living out a vocation to Christian marriage and family life in today’s world is a challenge, but it can be done. With the help of “The Joy of Love,” families may grow stronger, which will strengthen the community of the church as well.

It is a beautiful gift to the domestic church, but fails to extend the gift to the universal church as a family where female vocations to the ministerial priesthood are still forbidden, thus denying the Lord any chance of enhancing the Church hierarchy to include mothers as well as fathers. Pity.