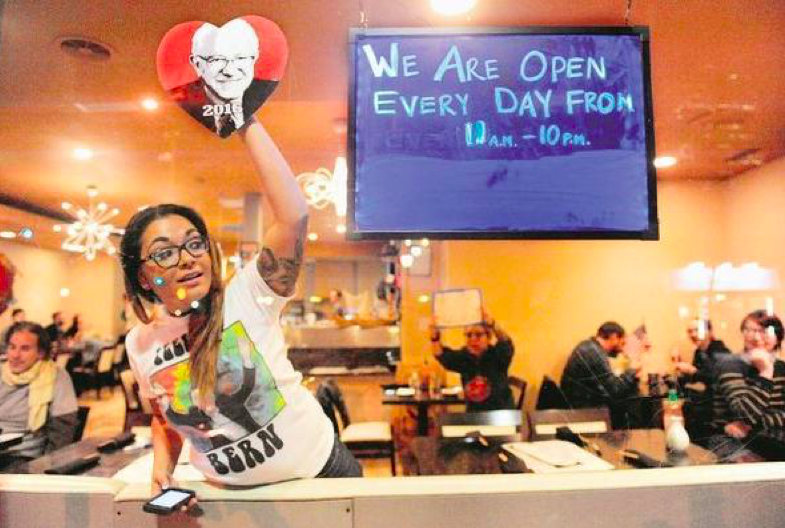 Berni asks party leaders to pick their side between the Wall Street billionaire class and working people!

In the pic: A woman holds up a Bernie Sanders sign while watching thousands protesting against the election of Donald Trump, in Denver, Colorado, on Thursday.—PHOTO: AFP

(Note: Not only the Democratic party, but all of us have to look in the mirror to see how ugly or beautiful we look, not to break up the mirror but to improve our face lift. What is that Mirror? It is first and foremost what our worst critics say about us, secondly only what the rest – friend or foe – say. Listening to what they say is not for accepting or rejecting but assessing.  When is assessing  to be done?

Only after considering the advise of those who do what they say. No use wasting time  pondering over those who say one thing and do the opposite.  Bernie sanders was not taken seriously by his party colleges, especially Hilary who could not see her face beautiful  enough and so she broke up that mirror. When the question of raising the minimum wage to $15 per hour came, she was very reluctant  to agree. That showed her priority and that of Sanders for those who sweat to earn a living, the working class.

When Sanders was sidelined for Clinton, there was no one to choose from, both Trump and Clinton represented the Wallstreet,  we wrote in our earlier post. This is not to say  to oppose Trump, the elected president, but to support and work with him where he is right. Ever since his election, he was very gracious in dealing with Clinton, Obama and Mr.Clinton, he was superlative in his praise for all of them. His office has started to  make his change  his behavior and deserves support where his policies help improve the lives of the working class and opposition where he goes at a tangent pursuing sexist or racist interests. So let

Democrates pick their side between Wallstreet and working class, as Sanders says. james kottoor, editor)

Far from the fireworks they had planned for Tuesday evening, the Democrats are struggling to find a spark for their future that looks dark now.

“…the Democratic Party needs to look itself in the mirror and work tirelessly to become once again the party that working people know will work for their interests,” former presidential aspirant of the party, Bernie Sanders, said in a statement on Thursday, appealing to elect Representative Keith Ellison as the new Democratic National Committee (DNC) chair. Mr. Ellison, a Minnesota Democrat, is an African American and the first Muslim member of the U.S. House.

The party is at its lowest level since 1922 across the U.S., as the Republicans now have 34 Governors, control the White House and both chambers of Congress. Republicans also control two-thirds of the State legislative chambers. On Tuesday, the Democratic Party lost its governorship in Missouri, New Hampshire and Vermont. As President, Donald Trump will also nominate a Supreme Court justice.

Until Tuesday evening, American commentators were discussing the dismal future of the Republican Party that they thought was laid in ruins by Donald Trump’s leadership. But Mr. Trump single-handedly expanded the electoral map of the Republicans, while the Democratic Party that remained in the control of its entrenched establishment lost touch with its own base that was poached on by Mr. Trump.

Mr. Sanders, who led a grassroots movement to claim the party nomination, lost out to Hillary Clinton. The DNC undermined Mr. Sanders’s bid and favoured Ms. Clinton, leaked emails of its functionaries indicated later. “I’m sure a lot of you have some feelings about the Democratic National Committee. The truth is that it is an important entity to build, support, and maintain if we are to have the chance to organise and win in the coming elections while Trump is President,” Mr. Sanders said.

The Senator from Vermont, who had criticised Ms. Clinton for her links with the Wall Street during the primary, had campaigned actively for her in the contest against Mr. Trump. “You cannot be a party which on one hand says we’re in favour of working people, we’re in favour of the needs of young people, but we don’t quite have the courage to take on Wall Street and the billionaire class,” he said on Thursday. “People do not believe that. You’ve got to decide which side you’re on.”

The interim DNC chair Donna Brazile’s term ends in March 2017 and the new chair will be elected by a vote of State and local party officials and delegates. If the President is a Democrat, he gets to nominate the DNC chair. The party delegates are mostly Clinton supporters, and Ms. Brazile’s predecessor, Debbie Wasserman Schultz, had to quit under allegations of manipulating the party nomination contest to favour Ms. Clinton. By pushing for Mr. Ellison, Mr. Sanders is challenging Ms. Clinton yet again.

“I don't think the political establishment and the billionaire class would like Keith Ellison as the DNC chair. Good… His experience and perspective would be key to leading the fight against Trump.”

In an interview on Thursday, Mr. Sanders refused to discuss whether he would have beaten Mr. Trump. He said he would have loved to take him on but there was no use discussing his chances now that the election was over. In another statement, Mr. Sanders said,“to the degree that Mr. Trump is serious about pursuing policies that improve the lives of working families in this country, I and other progressives are prepared to work with him.” “To the degree that he pursues racist, sexist, xenophobic and anti-environment policies, we will vigorously oppose him.”