Blacks shot outnumber whites in US 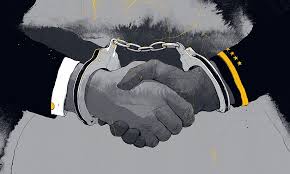 Young black men killed
by US police at highest
rate in year of 1,134 deaths
By Jon Swaine, Oliver Laughland, Jamiles Lartey and Ciara McCarthy,
in the Guardian, Thursday 31 December 2015

(Note: We wish a Happy New Year 2016 to our readers against the background of the unhappy news that US police shot to death five times more blacks – 1,134 — than whites in 2015, according to UK’s Guardian Survey. It calls upon all of us to redouble our efforts to treat all humans around us equally, irrespective of the shade of their colour – black, white, brown or yellow. The value of a human is not in the colour of one’s skin but in the content of his/her character, as Martin Luther King told us. We don’t have to be pessimistic about 2015 or optimistic about 2016.What is demanded of us is to be realistic about tomorrow. According to a “Politifact” survey in the last one decade gunshots killed over 300,000 people in US. In all 50 US states at least one death was caused by police in 2015. All realize it is next to impossible to root out caste system from Indian society and caste mentality from Indian psyche. Same is the problem in US with hatred towards the blacks. Just as a bull goes wild before a red rag some whites are led to act similarly. That is the source of the short form WASP, meaning White Anglo Saxon Protestant, who are most opposed to mix with the coloured although they use and abuse them. Just the opposite is the mentality of Spanish who colonized South America and mixed with the locals through marriage, thus nipping the racial problem in the bud. Let the New year help India to overcome its caste allergy and US it’s colour-caste mentality. james kottoor, editor.)
Final total of people killed by US police officers in 2015 shows rate of death for young black men was five times higher than white men of the same age.Young black men were nine times more likely than other Americans to be killed by police officers in 2015, according to the findings of a Guardian study that recorded a final tally of 1,134 deaths at the hands of law enforcement officers this year.