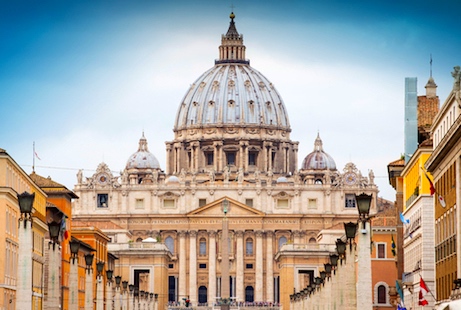 Pope gets nearly 20,000 'retweets' to become most influential world leader on Twitter.

In one thick volume, Vatican offices and departments tell their own stories.
The 2014 edition of the "Activity of the Holy See," released in July, runs more than 1,600 pages. Some offices submitted exhaustive reports, including every guest they hosted and every meeting their staff attended. Others provided more of a generic overview of their main tasks.
Some indications of life inside the mini-state, which is also the headquarters of the worldwide Catholic Church, include facts such as:
— The Vatican pharmacy employed seven religious and 53 laypeople in 2014.
— During the year, one or more steps were completed in studying possible miracles for 58 separate sainthood causes. The steps are: validation by the local diocese; study by a board of Vatican physicians; study by a board of theologians; and a vote by cardinals and bishops who are members of the Congregation for Saints' Causes. The last step is a decree signed by the pope — that happened only in 17 cases.
— During the 2013-14 academic year, 1,086 scholars from 54 countries received permission to do research in the Vatican Secret Archives. An average of 76.2 scholars a day accessed the Vatican Library.
— The Vatican gendarmes and other employees of the Vatican Security and Civil Protection Services numbered 194 — all laypeople.
— 611 people had Vatican citizenship, of whom 78 were "most eminent cardinals" and 108 were members of the Pontifical Swiss Guard.
— Close to 500 journalists were permanently accredited at the Vatican and another 4,126 temporary passes were issued by the Vatican press office to other media people — particularly for the canonizations of the two popes.
— For about 3,000 Church workers assigned new positions around the world, the Congregation for the Doctrine of the Faith in 2013-2014 was asked to issue a "nulla osta," signifying there is no obstacle based on their positions on matters of church doctrine. "In 40 cases, the nulla osta was denied, offering ample motivations. In 19 cases, there was a dialogue that resolved the existing problems."
— The doctrinal congregation also dismissed 38 priests and bishops from the clerical state in 2014, most in relation to the sexual abuse of minors.
— Through the Pontifical Council "Cor Unum," the Vatican's charity promotion and coordination office, Pope Francis gave more than $612,000 to emergency disaster relief efforts around the world and more than $1.6 million to human promotion and development projects.
— For the Church's missionary territories, Pope Francis created two new dioceses and 48 new bishops. Elsewhere in the world, the pope established two new Latin-rite dioceses and created 116 new Latin-rite bishops. He transferred more than 140 Latin-rite bishops to new dioceses and accepted the resignations of 124 other Latin-rite bishops, the vast majority of whom reached or surpassed the retirement age of 75.
— The number of Catholic schools in the world increased, as did the number of students. From primary school to university, the Catholic Church and its organizations run more than 210,000 educational institutions with a total of close to 58 million students.
— For the 2014-2015 academic year, the Pontifical Council for Promoting Christian Unity gave 45 Orthodox and Oriental Orthodox students full scholarships and another 20 students partial scholarships to finish their studies. In addition, the Pontifical Council for Interreligious Dialogue provided scholarships to a Muslim student from Nigeria, a Muslim student from Kazakhstan and a Buddhist student from Myanmar.
— In July 2014, each of Pope Francis' daily tweets in Spanish were retweeted an average of 11,000 times; in the same month, the mini-messages sent out on his English Twitter account were retweeted an average of 8,200 times. A study called "Twiplomacy" has defined Pope Francis as the most influential world leader on the social network based on how many of his "followers" retweet his messages.
— In St Peter's Basilica, 282 babies were baptized during the year; 183 others were baptized in the smaller St Anne's Church.