Xi Jinping urges world to ‘say no to protectionism’ 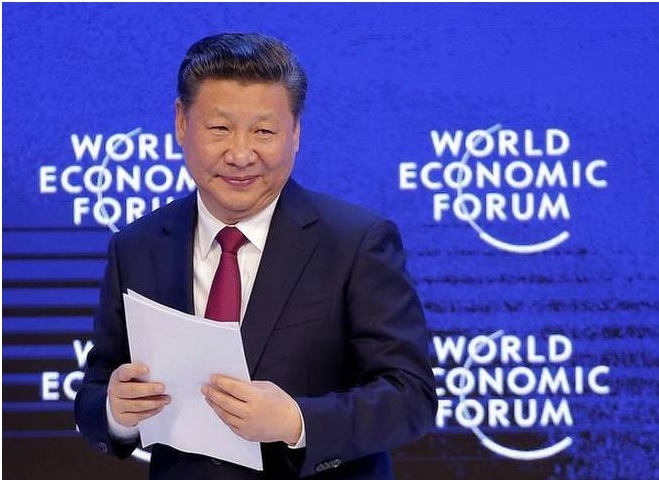 (Note: It is in Davos, Switzerland that 3000 business delegates from around the world are assembled in a serious discussion on world’s economic issues and Chinese President Xi Jinping is hogging the lime light.

Primum vivere, secundum, philosophare, says a Latin Proverb (First thing is to live, second only to philosophize) Basic need of man is survival, and the essential thing needed for it is to feed the stomach. “Give us this day our daily bread” of Jesus stresses that daily need of every human being. First things first, that is why Davos starts with economic issues or needs of man – food for the hungry. Already we posted here that just  8 persons – 6 Americans, one Mexican and Spanish – possess  the poorest 3.6 billion (half of world population) people’s wealth  which is totally abnormal and unpardonable, if done purposely.

Take a different look at the whole issue. Who is the richest man in this world? The one who has the least ‘needs’  and ‘wants’.Today we are living in a consumerist culture which is also a throw-away culture. You trade away your yesterday’s car for today’s new model. As you go for a new car you don’t hesitate to trade away your wife as well just to run with the changing fads.

This is to say that bad habits in your economic life, once pursued irrationally, will invade also all other aspects of your life – physical, social, cultural, political, spiritual etc. The lesson is that a contented life with the necessities of life alone is a continued feast.

There is a general allegation that China is constantly manipulating with its currency to make maximum profit in export and import dealings to suit its needs. All know Chinese goods are the cheapest. Why? It needs a separate discussion, similarly the triple issues of globalization: 1. Ideological sharing, 2. Free sharing of goods and services, and 3. Free movement of labour without restriction, most discussed today.Let us hope that Davos will come up with some concrete suggestions from the think tank of 3000 delegates dissecting various issues. james kottoor, editor).

"No one will emerge as a winner in a trade war," he added, in an oblique reference to Mr. Trump. Davos: Chinese President Xi Jinping presented himself as a champion of globalisation on Tuesday, lecturing the world elite in Davos on the dangers of protectionism and the futility of trade wars.

The leader of the world's second largest economy became the first Chinese president to address the World Economic Forum, where 3,000 well-heeled delegates from government, business, science and the arts have gathered. His appearance comes as populist protectionism is on the rise across Europe and in the US, where November's election of Donald Trump sent shockwaves through the global liberal order.

Globalisation should be "more inclusive, more sustainable," he said, adding that currently existing global institutions are "inadequate" and should be more "representative."Mr. Xi's speech was highly anticipated by Davos attendees, a global club who have been caught off-guard by the rising sentiment against liberal trade regimes, and are looking for guidance in the face of an incoming Trump administration in Washington.

While acknowledging that globalisation was a "double-edged sword," Mr. Xi argued that the benefits far outweighed the negatives and there could be no turning away from international economic integration."The global economy is a big ocean you cannot escape from," he said, likening goods, services and capital to waters that cannot be channeled back into landlocked streams and lakes.

"Pursuing protectionism is like locking oneself in a dark room. Wind and rain may be kept outside, but so is light and air," he said."No one will emerge as a winner in a trade war," he added, in an oblique reference to Mr. Trump.The incoming US leader has repeatedly accused China of carrying out trade policies that have led to massive US job losses and has threatened to slap tariffs of up to 45 percent on the country's goods.

Beijing is seeking to pick up the mantle of world economic leadership set to be shrugged off by Mr. Trump, who takes office on Friday. China supports building regional free-trade arrangements, and opposes those that are "exclusive" or fragmented, Mr. Xi said.China is pushing two major trade pacts, the Regional Comprehensive Economic Partnership (RCEP) and the Free Trade Area of the Asia Pacific.

Mr. Xi added that China has "no intention" to boost its trade competitiveness by devaluing the yuan currency or launch a currency war.Though Chinese leaders have repeatedly used international forums in the last year to assure foreign leaders that there is no basis for depreciation of the currency, the yuan has continued its slide, recently reaching eight-year lows, making the country's exports cheaper for trade partners.

The symbolism of Mr. Xi's speech was underlined by WEF chairman and founder Klaus Schwab, who said the world community was "looking to China" to provide responsible leadership and instill confidence.

"Whether people admit it or not, it's undeniable that China has taken the global leadership role in many respects," Lin Boqiang, professor at Xiamen University, told AFP. "You can talk about it or not, but that's what's happening in reality.