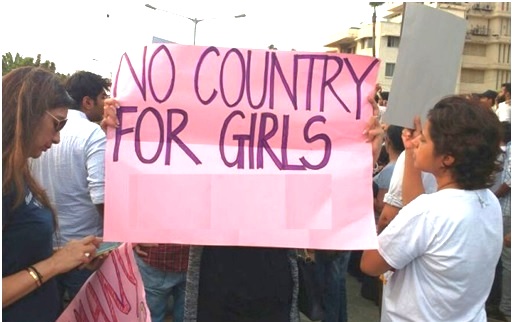 IMAGE: People participate in a protest march at Carter Road  in Mumbai's Bandra to demand justice for victims in the Kathua and Unnao rape cases. Photograph: Uttam Ghosh/Rediff.com

Nothing happens, until it happens to you and me!” Think of accidents like Titanic ship wreck, Nazi torture of Jews to death inch by inch, starving migrants shipwrecked or eliminated by bullets, innocent kids drugged, torchered to satisfy one’s sex urge, what is  worse, their heads smashed and thrown into a gutter.

And you and I don’t feel the shock and horror of being dropped suddenly into a bottomless boiling or freezing waters, because it is the daily happening and nothing out of the ordinary? But suppose, some one very near and dear to you and your family is involved in it? Would you stay unmoved and senseles without struggling to do something to come to their rescue? Yet you say the sense of fellow feeling love and care, of fraternity is alive and kicking in you!

How can you be more hypocritical? How will you wriggle out of the double edged sword: “You are neither hot or cold, so I vomit you out of my mouth,” of the Lord?

Think of a situation when  you can’t possibly leave your angelic toddlers and teens alone in the house or allow them to stroll to a nearby playground or shop without being torn to pieces by ravenous beasts called ‘Rapists’ hiding anywhere and everywhere! Yet that is happening every day and every where in India making it the notorious, infamous or barbarous  rapist nation in the world.

The compelling truth, “you have to be your brothers’ sisters’ keeper” will  dawn on you only when you are left alone in the lurch  with dire need, drowning in pain, torture, fear and darkness all round with no one in sight to help you! So if India has become the meanest and worst rapist nation in the world, you and I are equally responsible for it. Through our utter lack of concern for the safety, security and wellbeing of our next door neighbour, we all have contributed massively to make our country look that ugly.

This is the one powerful idea that Preeti D'Mello the author of the article below has succeeded to drive home, by citing examples one after another happening right under our nose. If we, you and I, succeed to feel the pain, that the victims recounted are your children, your sisters, your mothers, your close-knit family members, you will never stay idle without doing that little  bit or big help that you can to stop the spread of this destructive plague before it reaches your door step.

If you happen to be a Christian, what about the role of the various Churches  parading themselves as models par-exemplar of love and care, of brotherhood and fellow feeling? Even a shining Pope Francis is struggling to extricate himself from the deadly whirlpool of child abuse in Chile. We don’t have to recount instances of similar or worse rot in “Zero-malabar” or Latin Churches eaten up by rodents called illicit sex and casteism among the clerical class!

So our options are three, to live by the: “Rule of might, Rule of law, or Rule of love”.  The last alone “rule of love” that instils fellow feeling, brotherhood, sisterhood, family spirit only can get us out of the augian stables, the miserable plight we are in.  Can we all at the very least try to take our baby steps, to begin with, to become part of an enlightened society? React and say what you plan to do.  Editor, ccv.

Please read below the touching details of child rape

In India by Preeti D'Mello

Why people stand even

We are a barbaric society that lives by the rules of lawlessness and prejudice, and the aggressors prevail.In times of such deep moral degradation, of absolute annihilation of humanity, there seems to be no possibility to renew faith and move on.

The issue of rape and molestation in India has become so commonplace, brutal and cruel — it cannot be ignored and yet our outrage is momentary and passing. According to the National Crime Record Bureau, one in every two children is raped in India, and the rapes of the girl child has gone up by 82% from the previous year in 2016.

The predators are everywhere, it could be your turn next.

The newspapers every morning read like obituaries of children raped, molested, abused by whosoever can — most times by people in close proximity — fathers, uncles, brothers, cousins, teachers and almost always those who have power or strength.There are no human rights, leave alone child rights.

The rapists walk freely, believing what they did was not such a big issue, was a mistake, and in most cases did not happen at all.

The onus of proving the crime is that of the victim while the architects of outrage use the law, political muscle and money to keep themselves safe. There seems to always be sinister motives driving the victim — never the accused.

The raped were not really raped — they are trying to take over property, schools, bribe the rich by making ridiculous allegations, ruin reputations and even as bizarre as a cross-border conspiracy.Our response as fellow humans is even more disgraceful.Most of us hold our silence, some express outrage and then there are those who support the predators.

Self-preservation is a natural instinct even though fence sitting when a child is drugged, raped and killed is incomprehensible. Those who raise their voice and offer their shoulder are far and few, and their good intent often loses momentum with time and the onslaught of the system.

What is inexplicable is the support for the predators — funding and flag-raising, chanting of patriotic slogans like these children are not our own or even against us as country, strong voices out of dissent against such allegations against the rapists.

What is it that these supporters of rapists can't see — if the images and the charge sheets are not sufficient, what more proof would they need?Does the accused's clean record establish their innocence forever, especially in a stigmatic society when such rape cases rarely surface?

Or is it that we have abandoned our souls, are apathetic and couldn't care as long as the problem is not ours? Maybe I do care for only who and what I consider mine and will stand to support them, even if the crime is a barbaric, heinous, rape and murder of a child?

The question does come up — what if this was my child? My 3 year old, my 8 year old, my 17 year old? Would I be insular, silent? Would I protect those who I so actively protect now? Kathua saw an 8-year-old free spirited girl drugged, gang raped for days and brutally murdered.

Unnao saw a 17 year old raped under the ruse of employment and her father killed. Mumbai saw two 3 year olds raped on a school premises, allegedly by the founder.This is the broken fabric of our social system, of our Indian-ness.We have not been able to keep our children safe.

The power of the perpetrators of these crimes is beyond the muscle and the money they bring.The cops support them, the political system backs them, the recipients of their dole stand by them and worse still, those greedy of their influence back them.There are also those worried and scared for the everyday ease of their loved ones who preserve themselves by defending the criminals.

Kathua saw the Hindu Ekta Manch wave the Indian flag, chant 'Bharat Mata ki Jai' in defence of the accused. How do these add up when a Muslim child is raped and killed? In Unnao, the victim fought the authorities for a year for her voice to be heard and lost her father in the process.

In the Mumbai school, the accused rapist was arrested six months post the FIR and released on unconditional bail within days, and the chargesheet was filed nine months after the FIR — that only after the high court ordered the transfer of the case to another police station.

There has been no ease in these cases, but for the Mumbai school the high court cancelled the bail of the accused founder, and the Supreme Court upheld it.The drama does not stop there, with several parents and teachers of the school conducting a fund-raising initiative for the accused founder's legal fees and the school administration continuing to staunchly support him.

Why have the residents of Jammu not raised the tricolour for the 8 year old in Kathua, or chanted patriotism for a fair, unbiased, investigation? Does she not deserve the backing of her country?

Why has the police not used the force they exerted on the Unnao victim's father on the accused MLA's family? Do they live by the same rules?

We are a prejudiced nation

The killers of Nirbhaya still live off the taxpayers despite being on death row. Citizens drag through their entire lives in search for justice. Politicians rule this country and the people of this country have adapted to injustice, might, corruption and power. Are we becoming a condemned nation with a spineless population?

Till the time we do not wake up to embrace each other's pain, honour the diversity that exists in religion, community and status, connect to love, support and keep each other safe — the demonic forces of inhumanity will continue to erode, rape and demolish us.

The only way to be safe is to keep each other safe. Until then, this land of Buddha and Gandhi will continue to be raped.

(Preeti D'Mello is a parent and a member of Parents for Action against Abuse.)