WORLD COMMUNICATIONS DAY CELEBRATION IN THE ARCHDIOCESE OF CALCUTTA 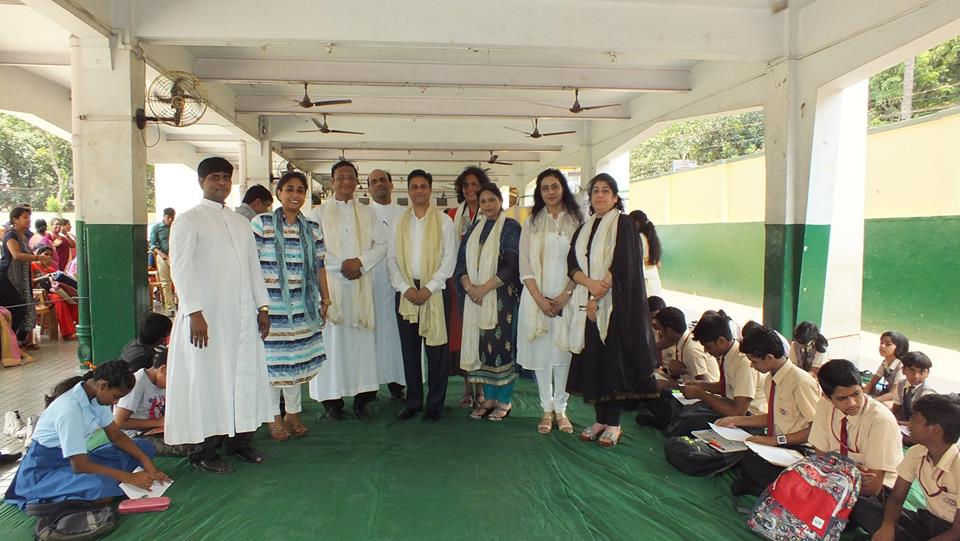 Sunday 13th May was indeed a very memorable day. First, it was the solemnity of the Ascension of Christ into heaven after 40 days of His Resurrection.  Secondly, it was World Communications Day (WCD), which is the only worldwide celebration called for by the Second Vatican ‎Council ‎‎(“Inter Mirifica”, 1963). It is marked in most countries, on the recommendation of the bishops of ‎the ‎world. Thirdly, it was Mothers’ Day and fourthly, it was the 101st anniversary of the first apparition of Mother Mary in Fatima Portugal to to three shepherd children Jacinta, Lucia and Francis.

On this auspicious day, the Archdiocesan Social Communications Commission (ASCC), Archdiocese of Calcutta, chose to celebrate World Communications Day through visual art by organising a Sit & Draw and Tattoo Competition aptly titled “VISUAL VOICES”.  The venue was St Xavier’s Primary School.  120 children from various schools and parishes of the Archdiocese took part.  Many parents gladly gave up their Sunday to egg on their children communicate their feelings (based on WCD theme) through art.

After Fr Neethidas Anthony, Principal St Mary’s School, Ripon Street, inaugurated the programme, Fr Devraj Fernandes, Editor of The Herald which is reportedly the oldest Catholic Newsletter in India, extended a warm welcome to the dignitaries who were felicitated with mementos.  A short video on Fake News was shown where a quote was attributed to a dolphin!

The Tattoo Competition was for the youths of 16-21 year age group where two girls from Loreto Sealdah were to say the least simply outstanding!

The top covers the full gamut of Pope Francis' World Communication Day message: COMMUNICATION through TRUTH, LOVE, FRIENDSHIP, JOY AND PEACE. The hand below represents Fake News which was also part of the theme. The two hands joined together show the full circle of communication today: Truth Vs Fake & Fekus!  A constant tug of war between Good and Evil.

In his speech to the participants Mr Rafi said communication plays a very vital role in all spheres of life. He cited the example of a toothpaste tube.  If it is squeezed all the toothpaste inside it comes out.  But once the tootpaste comes out, it cannot be put back inside the tube.  Similarly once words come out, they cannot be taken back. He said communication/words used with empathy can do a world of good.  If they are used badly they do a lot of damage. He zeroed in on three elements of effective communication: (1) To be honest (2) To build relations (3) To listen to others.  He felt the gift of listening, along with the gift of kind words, is paramount.

In each age-category three winners were awarded prizes.  Each participant was given a Certificate of Participation, health drinks and a food packet. The paper used for the Sit & Draw Competition was hand-made to make the event environment-friendly as far as possible.

In the evening which was preceded by a thundersquall and torrential rain, ASCC organised a “Tea and Talk” session with Archbishop Thomas D’Souza. Social Communications representatives from different parishes and the ASCC members participated in the two-hour session.

The Archbishop was briefed on the VISUAL VOICES programme held in the morning. Fr Devraj showed him select theme-based masterpieces drawn by school children. The Archbishop looked very enthusiastic, especially to read the art captions given by the participants.

The Archbishop said that the Holy Father’s World Communications Day message was widely publicised in all parishes including the Herald (where an article on WCD by this reporter was published on page 8 – Please click on the link on top of page).  He specifically mentioned the excellent Editorial in the Herald on WCD (page 4 of above link).  He said God is a Communicator and the central point of reference.  Word has power, word can create and word can destroy. He said for communication, person is very important. For faith has to be communicated through a human being (Catechist).  He said before one says or writes anything, one must verify whether what is being said or written is the truth and whether it will help build the community. He mentioned Fr Cedric Prakash speaks up for the Truth and is an icon for Christian Communicators. He congratulated the Archdiocesan Social Communications Commission (ASCC) for doing a commendable service to the Archdiocese of Calcutta and said it should organise training programmes for others including other Commissions.

Farrell Shah, Director of ASCC, made a video presentation on Fake News. It was shown to the participants that fake news is easy to spread but difficult to contain. He cautioned that before we circulate news, we must ensure it is authentic.  Through his presentation he showed several  sites (“Fact-checkers”) to check whehter a piece of news is fake or genuine.  These websites are: Snopes.com; Hoaxslayer.com; Politifact.com; WashingtonPost.com/FactChecker and Factchecker.org. Another two sites are Boomlive.in and Altnews.in.

The Archbishop requested ASCC to put up a website to help the community / the archdiocese in the identification of fake news. The evening ended with an interactive session where the participants freely expressed their points of view on fake news from their real-life situations.

In this connection, it may be worthwhile to recall an article captioned Sunday The Thirteenth (Reflections on a Momentous Day) which Fr Cedric Prakash wrote. He wrote "The World Communications 2018 theme “The truth will set you free” (Jn 8:32) is contextual and challenging. The sad reality is that there are very few Christian communicators today who have the courage to counter fake news and to take a stand for Truth, Justice and Peace! So much more to do!"  A really poignant observation by Fr Cedric.  Fr Cedric's observation reminds readers of what Pope Francis .spoke to the youth on Palm Sunday, 25th March 2018. He exhorted young Catholics NOT TO BE SILENT AND LET THEIR VOICES BE HEARD, after a meeting with them where they told him they want a more transparent and authentic church. The Pope said then "The temptation to silence young people has always existed."  "You have it in you to shout," even if "we older people and leaders, very often corrupt, keep quiet."