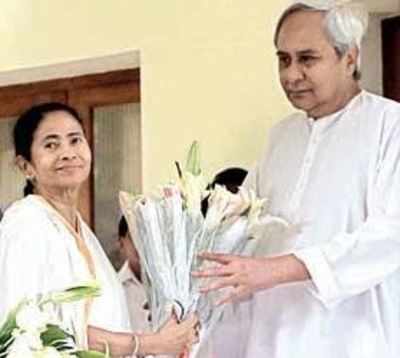 Note: Competitive politics in promoting women as MLAs and MPs will surely benefit democracy.  In this the Chief ministers of Odissa and west Bengal are setting a very good example, Naveen allotting 33% and Mamata, doing one better 40%. Why not go up to 50% because, is not that the percentage of women in society?

It simply reminds of what Pope Paul VI asked the world’s bishops assembled at the Council: “Where is half of humanity?” referring to the fairer sex, half in joke and half in earnest, most probably in earnest!

The women’s reservation Bill has been hanging fire for nearly  quarter of a century due to male domination and gender inequality in the country. At least now it is slowly being addressed by two chief ministers in country. One may hope that others may follow suit at least to save their face.

Don’t hope it in Churches!

But you need not expect from any of the organized religions, or churches, especially the Catholic church, since it has been a Constantine’s Church from AD 312 when the Emperor became Christian and allowed  Christians to come out from the Catacoombs and enjoy the benefits of the Gospel of Prosperity he started preaching and sharing. That still goes on.

It is the duty of the Churchmen, especially His Excellencies and Eminences to preach and others to practise. Soldiers in the battlefield must do and die while Generals and captains in the army must live in cosy comfort eating and drinking and ordering people about to go crazy. james kottoor,Editor CCV.

Please read below the Times of India

Ahead of the 2019 Lok Sabha elections, women’s reservation has emerged as a salient topic quite unexpectedly. First chief minister Naveen Patnaik declared his party BJD would field women for 33% of Odisha’s Lok Sabha seats.

Then chief minister Mamata Banerjee’s TMC upped the ante by nominating women for 40% of Bengal’s seats. He said she had made him immensely happy.

National parties are in the line of fire, with questions about when they would follow suit. Over the six general elections since 1996 the five national parties between them have fielded only 8% women candidates.

Now of course both BJP and Congress are avowing passionately their commitment to the Women’s Reservation Bill, but their record speaks against them. For around a quarter century they’ve played politics with the Bill instead of passing it. Entrenched interests and patriarchal fault lines have held sway. Regional satraps Naveen and Mamata have shown the moxie that national parties couldn’t.

This speaks of Naveen and Mamata’s unchallenged power to push an agenda through their respective parties. But it also speaks of the strengthening constituency of women voters. This time around, among registered voters, women’s turnout is expected to be higher than that of men.

In absolute numbers men will still be ahead, in part because around 21 million women remain unregistered to vote. They must join the dance of democracy. As for fielding more women candidates, it’s the right thing to do and smart.