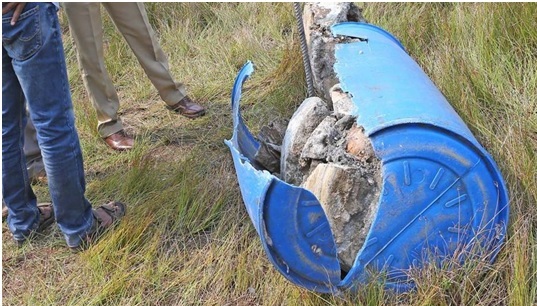 Police broke open the barrel sealed with concrete on both sides and found the skeleton. (HT Photo)

Residents said the barrel was floating around the lake for almost a year and they thought it was a fuel barrel dumped by ships. The barrel was taken to the shore when the lake was cleaned two months ago.

(Note: “Thou shalt not kill!” In spite of that eternal command etched in the hearts of all of us, from time immemorial, from the time of Abel slaughtering  his brother Abel, are we not still living in a murderous world?

This is happening in this day and age in Kerala which boasts of being the most literate state in the country. Are we becoming educated illiterates? Even at the time of Vivekananda, he found it and called it a ‘Mad House’  Has it deteriorated further? Especially in its treatment of women,the fairer and weaker section?

Nothing happens until it happens to you or to your blood relations. She is just an anomymous number in a crowd. So none of us are bothered due to a culpable lack of a sense of brotherhood to all fellow humans which is what makes one a cultured, refined human being. Only when such sense of  fellowship overflows in us, can we call ourselves civilized and truly educated. james kottoor, editor ccv.

Read below the report

A skeleton of a woman was found stuffed in a barrel floating near a lake in Kochi on Monday.

Local residents alerted the police when they found ants swarming the barrel. Police later broke open the barrel sealed with concrete on both sides and found the skeleton.

Forensic experts confirmed that the body was that of a 30-year-old woman and it was at least a year old. Except the skeleton and hair, nothing was left on the body.

Police suspect that after the murder the body must have stuffed into the barrel and concrete poured on both sides to avoid detection. Residents said the barrel was floating around the lake for almost a year and they thought it was a fuel barrel dumped by ships. The barrel was taken to the shore when the lake was cleaned two months ago.

“With hands and legs tied, the body was stuffed inside carefully. It seems professional killers have done this. We are examining the missing persons’ files to identify the body first,” said a senior police officer of the port city.

Three months back, the body of a man was found nearby tied in a sack filled with stones and concrete blocks. The stones in the barrel are similar to those found in the sack and police are examining if there is any similarity between the two murders.