With Migrants and Refugees

“Welcoming, Protecting, Promoting and Integrating Migrants and Refugees”, is the theme of the message (Please see link above) of Pope Francis for the 104th World Day of Migrants and Refugees. The Catholic Church will observe the day this year on 14 January. The Holy Father in his message highlights “the Church’s concern for migrants, displaced people, refugees and victims of human trafficking”. He makes a passionate plea for more meaningful commitments from every section of society and challenges all for a more proactive response to the cries of the migrants, refugees and other displaced.

The Pope’s message is also in context of the ‘United Nations Summit for Refugees and Migrants’, which was held in New York on 19 September 2016. It was the very first time that the  UN General Assembly had brought together Heads of State and of Government to develop a blueprint for a more effective international response to perhaps the single most important crises of modern times, which affect millions across the globe today.

‘The New York Declaration’,  which was the outcome of this historic meet and signed by 193 Member States (including India)stated, “We declare our profound solidarity with, and support for, the millions of people in different parts of the world who, for reasons beyond their control, are forced to uproot themselves and their families from their homes. Refugees and migrants in large movements often face a desperate ordeal. Many take great risks, embarking on perilous journeys, which many may not survive. Some feel compelled to employ the services of criminal groups, including smugglers, and others may fall prey to such groups or become victims of trafficking. Even if they reach their destination, they face an uncertain reception and a precarious future. We are determined to save lives. Our challenge is above all moral and humanitarian. Equally, we are determined to find long-term and sustainable solutions. We will combat with all the means at our disposal the abuses and exploitation suffered by countless refugees and migrants in vulnerable situations”. (#8-10)

To realise in practise the lofty ideals encompassed in the Declaration, world leaders committed themselves to drafting and approving, by the end of 2018, two Global Compacts: one regarding refugees and the second, for safe, orderly, regular and responsible migration. Both these compacts are meant to comprehensively protect, promote the rights and integrate migrants and refugees into the mainstream. It is not going be smooth sailing. Already on 3 December 2017, the United States announced that it was withdrawing from the two Global Compacts. India on the other hand has literally shut its doors on the persecuted Rohingya refugees fleeing Myanmar. Xenophobia, racism and exclusiveness is on the rise in several other countries. Fortunately, most of the world is still concerned about the plight of refugees and migrants and hopefully, by the end of 2018, the two Global Compacts will see the light of day!

In his message, Pope Francis refers particularly to world leaders saying, “At the United Nations Summit held in New York on 19 September 2016, world leaders clearly expressed their desire to take decisive action in support of migrants and refugees to save their lives and protect their rights, sharing this responsibility on a global level.  To this end, the states committed themselves to drafting and approving, before the end of 2018, two Global Compacts, one for refugees and the other for migrants. Dear brothers and sisters, in light of these processes currently underway, the coming months offer a unique opportunity to advocate and support the concrete actions, which I have described with four verbs.  I invite you, therefore, to use every occasion to share this message with all political and social actors involved (or who seek to be involved) in the process which will lead to the approval of the two Global Compacts”. 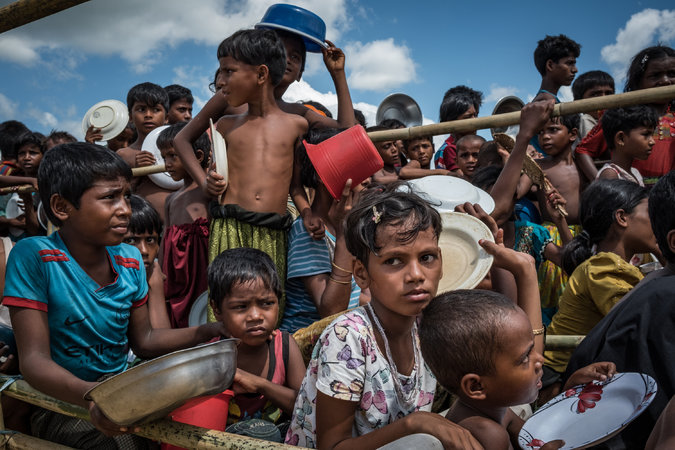 On 1 January 2018, the World Day of Peace (India observes it on 30 January, the anniversary of the martyrdom of Mahatma Gandhi) the message of Pope Francis focused on “Migrants and refugees: men and women in search of peace”. His message is an invitation to “all people and all nations on earth” to realise that refugees and migrants are “men and women in search of peace”. He urges all through four key verbs to welcome, protect, promote and integrate migrants and refugees saying, “In a spirit of compassion, let us embrace all those fleeing from war and hunger, or forced by discrimination, persecution, poverty and environmental degradation to leave their homelands. We know that it is not enough to open our hearts to the suffering of others. Much more remains to be done before our brothers and sisters can once again live peacefully in a safe home.”

The Migrants and Refugees Section (M&R) as part of the new Vatican Discastery for Promoting Integral Human Development, under the direction of Cardinal Peter Turkson, was established in 2017. The M&R is for the time being, personally guided by Pope Francis with Fr. Michael Czerny S.J. and Fr. Fabio Baggio C.S. as the Under Secretaries. In keeping with the thrust of Pope Francis, the M&R has published a significant booklet, ‘Towards the Global Compacts on Migrants and on Refugees 2018’, which contains three important documents:

This document (https://migrants-refugees.va/20-action-points) is rich in content with practical points for committed engagement from all sections of society. It is an open invitation to reflect, to internalise and to engage in practical responses in order to respond to the realities of the refugees and migrants today. The document needs to be shared with all women and men of goodwill. The local Bishops/Dioceses/ Catholic organisations need to see how best they can come together to mainstream the concerns/thrust of this document. Finally, all are encouraged to interact with political and social actors, at every level, to ensure the approval of the two Global Compacts! Several Catholic organisations are already involved in this campaign. The Jesuit Refugee Service (JRS) http://en.jrs.net  for one, has adopted the hashtag #Do1Thing so that the Global Compacts become a reality among all.

There is much more to be done today by all in order to welcome, protect, promote and integrate migrants, refugees, and the displaced. The challenge is whether we have the courage to begin doing at least   ONE THING right now!

* (Fr Cedric Prakash sj is a human rights activist. He is currently based in Lebanon, with the Jesuit Refugee Service (JRS) in the Middle East on advocacy and communications.  Contact: cedricprakash@gmail.com )