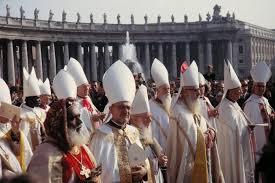 Opening Windows is in most cases child’s play. But often, windows which have not been opened for a long time, get jammed, the latches and bolts get rusted, cobwebs, dust and grime are all over the place; besides the room for which the windows are meant, becomes musty, the air is almost putrid and something urgently needs to be done: the windows have to be opened by an expert widow opener who has to be called in immediately!

Exactly fifty-five years ago, God gave to the Church and to world an expert windows opener in the person of Pope John XXIII. On October 11th 1962, he opened the historic Second Vatican Council fully convinced that it was time to “throw open the windows of the church and let the fresh air of the spirit blow through.” In what is regarded as a defining moment in the history of Christianity, John XXIII succeeded in throwing open the windows of the Church and allowing that much needed fresh air of the spirit to blow through.

The Feast day of a Saint in the Catholic Church is normally kept on the anniversary of the death (birth in heaven) of that Saint; in some rare cases on the birth anniversary of the Saint. In exceptional cases, another day is assigned. It is significant therefore, that the Catholic Church celebrates the Feast of St. Pope John XXIII on October 11th, the day he began Vatican II.

John XXIII was canonized (together with Pope John Paul II) a saint by Pope Francis on April 27th 2014. In his homily on the occasion Pope Francis said, “In convening the (Second Vatican) Council, John XXIII showed an exquisite openness to the Holy Spirit. He let himself be led and he was for the church a pastor, a servant-leader. This was his great service to the church; he was the Pope of openness to the spirit.”

It was not without reason that exactly six months after opening Vatican II and in the midst of it, Pope John XXIII literally shook the foundations of this earth on April 11th 1963 through his Encyclical ‘Pacem in Terris’ (Peace on Earth). This was his last Encyclical that he gave to the Church and the very first one by any Pope to be addressed “to all men of goodwill”.  The Encyclical was written in the context of the turbulence and conflict, which had seized several parts of the world: the Cold War, the erection of the Berlin Wall, and the Cuban Missile Crisis.

Vatican II and his path-breaking Encyclical are like two sides of a coin. The Church and the World: inseparable; both needed opening up and a thorough cleaning! Pacem in Terris has a more elaborate title, “On Establishing Universal Peace in Truth, Justice, Charity and Freedom”. The four pillars: Truth, Justice, Charity and Freedom are in a sense the sum and substance of the Encyclical. It observes that real peace needs to be based on an order "founded on truth, built according to justice, vivified and integrated by charity, and put into practice in freedom".

Through the Vatican Council, Pope John XXIII wanted to make the Church more open, transparent and participative. This wish is indirectly reflected in his Encyclical in which he makes human rights paramount, saying that peace is possible only when the rights of every human being are addressed. Pacem in Terris goes on to list eight broad dimensions of human rights (most of them had earlier found expression in the Universal Declaration of Human Rights) like the rights to proper development of life, to basic security and to religion and conscience; and emphatically stating that these rights are “universal, inviolable and inalienable”. Pope John XXIII in his Encyclical reminds all men and women of goodwill (and particularly the Catholics) to be more engaged in social and political life in order that we have a more just and peaceful world.

It is truly amazing that the very realities, to which Pacem in Terris drew attention to, are prevalent in our world today. War and violence, ethnic and religious strife have caused the destruction of life and property in several parts of the world; millions have sought refuge in other countries and many more are internally displaced; consumerism and the ills of globalization, the lack of concern for our common home have all fragmented the earth as never before. The nuclear threat looms large (thankfully, the Nobel Peace Prize for 2017 was recently awarded to the ‘International Campaign to Abolish Nuclear Weapons.’). Some divisive ‘leaders’ are even determined to build new walls.

Both the Church and the World needed a good Windows Opener; John XXIII fulfilled that mission in many ways, even as he made Truth, Justice, Charity and Freedom, the fundamentals of a more open Church and peaceful society. As we celebrate the memory of this Beloved Saint-Pope, let us pray that the spirit and message of Vatican II and of Pacem in Terris may profoundly touch those in the Church and all ‘men and women of goodwill’ everywhere!