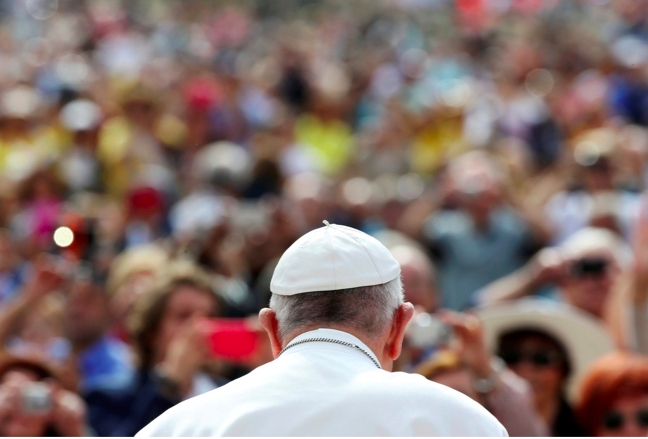 Pope Francis in Saint Peter’s Square at the Vatican last

(Note: Apparently neither New York times nor people in general seem to believe or take seriously what the Pope or the Church says when it is about taking action against priestly class or highly placed prelates. Why? Who will ever cut the branch on which one is perching? Today people look at prelates in the church not to hear what they say (preach) but what they do (recall recent kidnap and torture of Cudappah bishop by 3 priests). They expect church to lead by example, not by the silence of nearly 180 brother bishops to that kidnap. People already interpreted their silence as eloquent expressions  of their admission of guilt, connivance or cowardice. Some ten years ago this scribe also worte that he had not seen or heard of any Indian priest or bishop donating eyes after death although there was no dearth of their preaching and exhorting the faithful to do it. But today with the breath-taking, eye-popping  examples of Pala Bishop Murikan, Fr. David Chiramel, Fr.Sebastian and few sisters donating their kidney to revive the dying, a real revolutionary rebirth of Jesus-like mercy towards the needy, is bursting out like cool springs in the arid desert of Kerala. While Bishop Murickan and Fr. Chiramel made the sacrifice and self-less service to save a Hindu brother of theirs, Fr. Sebastian did it for Muslim brother. This breaking down of man-made religious barriers and divisions can never be done by any amount of priestly or Episcopal  preaching or pastoral letters sent from any air

conditioned cool surroundings. The Pope may call himself sinner, beat his breast or embrace a leper. None of these things need necessarily to move most of the Indian bishops who live in ivory towers. james kottoor, editor)

Victims and their advocates are understandably skeptical about Pope Francis’ latest plan for disciplining bishops who schemed for years to protect abusive priests in the church’s devastating pedophilia scandal.

The pope dropped last year’s plan to create a special tribunal to investigate offending bishops. Instead, last week, he handed the task to existing Vatican agencies, accompanied by a personal order to investigate and remove diocesan leaders found guilty of engaging in cover-ups.

The fief-like powers of bishops, plus the Vatican’s failure to act, made cover-ups possible. After Francis became pope, he promised that the Vatican would do more to address a scandal that, as the news media revealed, had reached staggering proportions.

In the United States alone, where more than 700 priests were eventually dismissed, no bishops were punished by Rome as the scandal unfolded. This despite an investigation by lay leaders who warned “there must be consequences” for those who provided refuge for priests accused of raping schoolchildren, which often meant that the accused priests were shifted from parish to parish.