reports, Rahul Gandhi will take over as President of the Congress Party.  This will be at a time when the Congress Party has only 44 seats in Lok Sabha, lowest tally ever in the annals of Indian history, and many of its popular leaders have quit the party. Rahul has several young leaders in his team , namely Jyotiraditya Madhavrao Scindia who is an MBA from Stanford Graduate School of Business and worked as an investment banker for Merrill Lynch and Morgan Stanley, Sachin Rajesh Pilot who is also an MBA from Wharton School of the University of Pennsylvania and son of former Congress Minister Rajesh Pilot, Priya Dutt daughter of famous filmstar and politician Sunil Dutt, Tamil actress Ramya AKA Divya, and Agatha Sangma, of Nationalist Congress Party (NCP) and daughter of former Lok Sabha Speaker P.A. Sangma  who was the youngest Minister of State in the UPA 2nd Manmohan singh Cabinet. There could be many more, just waiting to be unearthed.  Rahul would do well to consult Sourav Ganguly, India's prolific captain, who is known for his astute acumen, uncanny ability to identify talent, man management skills and unparalled ability to assess the strenghts and weaknesses of his opponents. Indian Cricket has reached this high pedestal today mainly because of the turnaround and metamorphosis brought about by Sourav Ganguly who instilled a mind of steel in his band of players.  To take his party's kitty from a pathetic 44 to many more seats and to change Indian Politics, Rahul Gandhi has to do a Sourav Ganguly. He also has to hone his reading skills especially the lives of great leaders. Isaac Gomes, Associate Editor, Church Citizens' Voice).

The news of Rahul Gandhi's likely coronation as the president of Congress coincided with the CPM politburo ruling out a proposal to consider an alliance with the Congress and other Opposition parties ahead of the 2019 Lok Sabha elections.

While the CPM will take a final decision on the same at the party congress in Hyderabad, in April next year, Rahul Gandhi's task is cut out from day one–to hit the ground running and stitch a Grand Alliance to check the Modi-Shah juggernaut in 2019.

While Sonia Gandhi is known for her ability to reach out to parties and build consensus on issues when needed, Rahul Gandhi's skills will be put to test especially after the Bihar episode where Nitish Kumar walked out of the Grand Alliance with Lalu Prasad's Rashtriya Janata Dal (RJD) and the Congress. 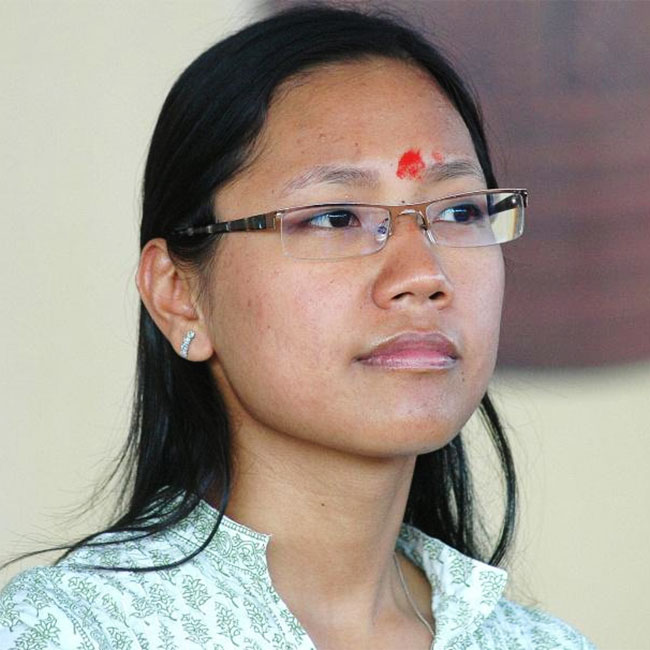 Agatha Sangma received her LLB degree from Pune University and later joined the bar in Delhi High Court. She did her Masters in Environmental Management from Nottingham University, UK.

Nitish Kumar, who had met Rahul days before he walked out of the alliance, attacked the Congress vice-president for not doing enough to save the Grand Alliance. Earlier, Himanta Biswa Sarma, who quit the Congress and later became the chief architect of the BJP's win in Assam in 2016, had accused Rahul of not being a serious party leader and had famously said that he has time for dogs but not for the party.

It will be baptism by fire for Rahul Gandhi who will take over the Congress at a time when it has only 44 seats in Lok Sabha, the party's lowest tally ever. Many senior leaders have quit the party, the most recent being Shankersinh Vaghela in Gujarat and Narayan Rane in Maharashtra.

Besides keeping the Congress flock together, the 47-year-old MP from Amethi has little time in hand to get Opposition parties together before the 2019 Lok Sabha election.

In Uttar Pradesh, the political heartland of India, Rahul Gandhi enjoys a favourable rapport with Samajwadi Party chief Akhilesh Yadav. However, the disastrous performance of the Samajwadi Party-Congress alliance in the Assembly election shows a need for recalibration of the electoral strategy besides reaching out to more parties for support.

Further, the on-off fight between Akhilesh Yadav and father Mulayam Singh Yadav had hurt the party's prospects in the Assembly election. On the other hand, Bahujan Samaj Party (BSP) chief Mayawati has made it clear that talks on alliance can proceed after seat-sharing arrangement is finalised.

While the Congress under Sonia Gandhi led talks on the need for building a Grand Alliance before 2019, the party has kept Arvind Kejriwal-led Aam Aadmi Party at an arm's length so far.

At a lunch for Opposition leaders hosted by Sonia Gandhi before the presidential election, Arvind Kejriwal was not invited. West Bengal Chief Minister and Trinamool Congress chief Mamata Banerjee, who has repeatedly stressed on the need for Opposition parties to come together to stop the BJP in 2019, has made it known that Kejriwal too should be roped in.

If Rahul Gandhi indeed manages to bring parties like the AAP under the united Opposition umbrella, it can help him silence critics who have questioned his skills at forging alliances after the Bihar disaster.

It remains to be seen if Rahul Gandhi steps up to the plate and gets a Congress-led Opposition ready in time for the big battle with the BJP in 2019.