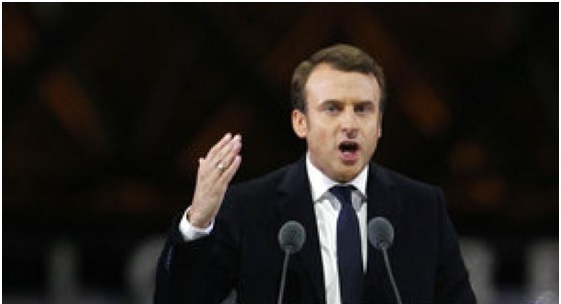 The writer is based in South India for the past 40 years. He writes on India, China, Tibet and Indo-French relations.

The strong strategic partnership between France and India will remain “En Marche”.

" Tonight, France won,” solemnly declared Emmanuel Macron, the new President of the French Republic, after winning the most unexpected presidential elections. The 39-year-old former investment banker defeated Marine Le Pen of the Front National with 66 per cent of the valid votes.

It is the finish of an extraordinary rise for Mr Macron, France’s youngest-ever leader since Louis-Napoléon Bonaparte, who was elected President in December 1848 at the age 40. So far, since the creation of the Fifth Republic in 1958, the youngest President was Valéry Giscard d’Estaing, who at 48 became head of the French State in 1974.

The leader of En Marche! (On the move!) movement will also be the youngest among the G-20 leaders, before Justin Trudeau, who turned 45… and as a head of state in the world, he will be fifth, far behind Jigme Khesar Namgyel Wangchuck, King of Bhutan, who stepped onto the Happiness Throne at the young age of 28.

During the second round of the presidential election, the rate of abstention touched a rather high level with 26 per cent, but more interestingly, more than 4.2 million electors who went to the booths deposited a “white” (blank) or “nul” (invalid) ballot. A record!

On Sunday, just before 11 pm, Mr Macron met his supporters near the glass pyramid of the world-famous courtyard of Le Louvre in Paris. He told the jubilant crowd: “Merci mes amis!’ (Thank you, my friends), adding: “France has won, what we have done has no precedent, no equivalent.” He continued: “Everyone said that it was impossible, but they did not know France. I want to thank those who voted for the defence of the Republic.” Then he addressed those who voted for Ms Le Pen, his unsuccessful rival: “I know our disagreement, I will respect them. You have expressed anger, disarray, sometimes convictions, I respect this. I will do everything possible during the next five coming years to make sure that you don’t find reasons to vote for the extreme.”

Paraphrasing the revolutionary leader Georges Danton, who during the French Revolution exhorted: “de l’audace, encore de l’audace, et toujours de l’audace”, (audacity, more audacity, and ever more audacity), Mr Macron asserted: “this audacity will guide us.” Accepting her defeat, Ms Le Pen proposed a profound transformation of her xenophobic party, which will have a new name. Her Front National, however, objected to Beethoven’s Ode to Joy (the European anthem) being played when Mr Macron entered the Louvre, instead of La Marseillaise.
In retrospect, it was the strangest French elections’ campaign for decades. First novelty: primaries for the Left and the Central/Right were organised.

A first surprise, François Fillon, who served as President Nicolas Sarkozy’s Prime Minister, emerged the winner on the right side of the spectrum. His intentions of introducing drastic cuts in the bureaucracy to reduce the budgetary debts had made him rather popular, but… fate struck. The satirical weekly Le Canard Enchainé, published documents showing that for more than 30 years, Mr Fillon’s wife, Penelope, had been employed by him as a parliamentary secretary… while she was not working.

Mr Macron’s masterstroke was perhaps to have avoided the primaries, and a possible defeat against his former Socialist Party’s colleagues. His fate had turned in August 2015, when he stated that he was no longer a member of the Socialist Party (PS); he was just serving as a minister for economy and industry in François Hollande’s government as an Independent.

On April 6, 2016 in Amiens in northern France, he founded an independent political movement, En Marche! He was then officially reprimanded by President Hollande (though some rumours say that the entire operation to get him elected may have been piloted from the Élysée Palace).

On August 30, 2016 Mr Macron resigned from the government and on November 16, he formally declared his candidacy for the French presidency; he then spoke a “democratic revolution” and promised to “unblock France”.

Retrospectively, one could ask, what was the use of the “primaries”? Apart from the post-election rhetoric (and euphoria), times are difficult for the nation, which gave the triple mantra of liberty, equality and fraternity to the world (and to the Indian Constitution).

During the last five years, a weak presidency has demoralised the nation further. Mr Hollande’s unpopularity had beaten all records, mainly due to his lack of charisma and many goof-ups. Has Gen. de Gaulle’s “grandeur de la France” (France’s greatness) gone for good?

This election saw the fading of the differentiation between the political “right” and the “left”. Symbolically, Mr Macron, the candidate, refuses to carry a “rightist” or “leftist” label.

Though his party, “En Marche!” wants to challenge the entire political system, it might not be easy knowing that the new President is a pure product of the establishment, having worked first with Mr Sarkozy, then with Mr Hollande. Cleverly, he has managed to remain vague, trying to please both the “right” and the “left” time; Mr Macron nevertheless remained a fervent European, as Beethoven’s piece demonstrated. His victory gave an immediate boost to the euro and the European stock exchanges.

The defeat of Ms Le Pen, who spoke of a Frexit, created a sigh of relief in Europe. German Chancellor Angela Merkel immediately called Mr Macron to congratulate: “She praised him for championing a united European Union that is open to the world,” said her spokesman.

But huge challenges will soon be facing the new President. The first one is the legislative elections due in June; there are good chances that the French semi-presidential system will witness a “cohabitation” so specific to France. When the President is from a different political party than the majority of the members of Parliament, he has to name a Prime Minister acceptable to the parliamentary majority, in other words, opposed to his policies.

The Prime Minister must be acceptable both to this President and to the legislature; it is not an easy endeavour. This has happened a few times since the beginning of the Fifth Republic in 1958, making governance difficult to say the least. Next week already, Mr Macron needs to nominate a Prime Minister; it will certainly not be an easy choice.

At Le Louvre, Mr Macron admitted that the future may be full of hurdles: “I am aware that the task will not be easy, but I will tell you the truth… I want the unity of our people, the unity of our country… I will serve you with love.”

Two days before the vote, hundreds of thousands of emails and documents stolen from his campaign were dumped online and then spread by WikiLeaks (Mr Macron called it an attempt at “democratic destabilisation”).

This may bring some surprises, though as President, he will be covered by immunity for five years. His election, ending the most acerbic election campaign in modern French history was marked by repeated surprises, but the defeat of the extreme right is certainly a morale booster for the French nation.

Will the result change France’s relations with India? It is still too early to know if it will make a difference; it may depend on the alchemy between Prime Minister Narendra Modi and the new French President. In any case, whatever the new legislative (and majority) may be next month, the strong strategic partnership between France and India will remain “En Marche”.