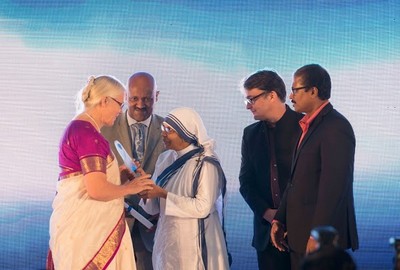 Australian Graham Staines and his two young sons died in 1999 when their car was set on fire by a mob.

Mumbai: (UCAN) – A missionary whose husband and children were burned alive by Hindu nationalists has been given a prestigious award for her charity work.

Australian Graham Staines and his two young sons died in 1999 when their car was set on fire by a mob who stopped them from getting out.

His widow, Gladys, opted to stay in India with their 13-year-old daughter Esther and continue to work among people with leprosy. She publicly forgave the attackers.

Now she has been honoured with the Mother Teresa Memorial Award for Social Justice by the Harmony Foundation, a Mumbai-based charity that grants the only award endorsed by the famous nun's Missionaries of Charity.

"I thank God for his help in enabling me to carry out the work in caring for people with leprosy, even after my husband was killed," Staines told AsiaNews after being named this year's winner.

The citation reads: "Awarded for helping in the eradication of leprosy and helping remove the stigma from the minds of people and uplifting the cured leprosy patients to join the mainstream of society from where they were declared as outcaste."

Gladys Staines returned to Australia in 2004 but continued her work with the Evangelical Missionary Society. She was awarded the prestigious Padma Shri medal for Social Service by the Indian government the following year and used the money from the award to upgrade a home for people with leprosy to a hospital.

The treatment of the attackers who killed her family remains controversial. Initially 51 people were arrested, but almost all were acquitted.

Two are serving life sentences. In 2011 the India Supreme Court changed its rationale for denying the death sentence that prosecutors had demanded; it had originally said the attackers were trying to "teach a lesson" to the missionary. The statement was re-worded but the sentence was upheld.