As a part of Prime Minister Modi's Digital India initiative, the Indian Railways have partnered with Google to provide Wi-Fi broadband facility to passengers at major railway stations across the country. This Google RailTel initiative was launched in January 2016 and till date has reached 140 stations across India. Their lofty aim is to reach 400 stations by 2018.

Under this initiative, RailTel, a subsidiary of the government of India provides the high speed network via Fiber while Google sets up the wireless infrastructure and provides tech support. The speeds on offer range from 20-40Mbps for 30 minutes after which they are gradually reduced in order to manage bandwidth.

The India Today Tech had the opportunity to experience Google's RailTel initiative first hand at Nizamuddin Railway station. We also interviewed Gulzar Azad  — head of connectivity, Google India — who spoke about the partnership with RailTel, the challenges faced in bringing high-speed Wi-Fi to 140 of India's major railway stations, what Google and RailTel have learnt along the way and the road ahead for this ambitious initiative.

Q: This initiative started before Jio revolutionised the telecom sector with its disruptive plans and brought 4G to the masses. Have you seen a dip in the daily usage since Jio entered the marketplace? Has the widespread and cheap availability of 4G data since the entry of Jio affected Google's RailTel strategy in any way?

This is a great question. Very relevant in today's time. What we have seen is that as 4G has emerged, we have seen no dip in the Wi-Fi usage. If you talk about the time when 'free' 4G started emerging, we were at about 5 million (50 lakh) monthly active users, today we are at 6.5 million (65 lakh) monthly active users. So the RailTel initiative has only grown since then.

The mark of telecommunication development of any country is how close the Fiber is to the user. In effect, you must see that the Wi-Fi that we are implementing is an attempt to bring Fiber close to the user. And that is working pretty well for us.

Q: During my interactions with passengers and workers at the Nizzamudin railway station, I found out that many of them feel that during peak hours the speed slows down quite a bit. Is that something you are looking into?

I feel that is also a very interesting, emerging phenomenon. If you see when we started the project, even at peak hours the speed we were giving the users was very satisfactory and now people want more. This is exactly what we were expecting. Once people start experiencing high-speed internet, the user behavior changes – the expectation now is higher. There is more demand for less and less latency in the network.

The good news for us is that across the last twelve months, we have not seen a dip in monthly active users. The average usage still remains 350MB per user per session which shows we have augmented the network and capacity while adding more users.

Since April, we have made the login process Ad supported and that is helping RailTel from an ISP perspective. The revenue is majorly meant for RailTel. We have a revenue share mechanism which is expected as we are a contributor to the project itself – Google helps build the wireless (infrastructure) and RailTel brings in the Fibre and the connectivity.

The idea of the internet here from an experience point of view is to make it the same internet that you and I have and for that internet to be available to everyone. That is the singular goal of our vision – for a billion people to experience the internet you and I experience in our homes, in our offices.  And when we do that, we are following the regulations set by the country.

The ISP (RailTel) follows the regulations from the government in terms of what's allowed on the internet and what's not. This internet is not different from every other internet across the country.

Q: If we talk about the speed, I was told that 1Mbps is the minimum speed even when the 30 limit high speed cap is crossed. Is that a realistic claim?

The way the network has been set up there is actually no speed limit before or after. The design of the network is such that in the first 30 minute time limit, we allow the user to get unfettered access – the idea is to get all users to a point where they could access high quality HD video streams.

After the time limit is crossed, we make sure that everybody does still have internet and the net is still low latency. We are adjusting the network dynamically so that people can still access the internet but in the first half an hour they can access HD quality video streams. 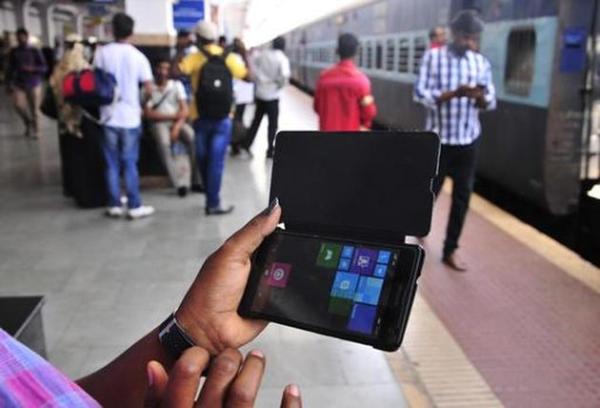 Q: But what is the minimum speed? – I spoke to many people and got a lot of varying replies. Some people said it is as bad as 128kbps but others said they can stream video for 24 hours.

The quality of your internet is not just measured by the speed. It is also measured by the latency of the network. We have designed the network in a way that even when the network is at low speed, it is still a low latency network. The internet is dynamically configured in such a way that you will still be able perform certain use cases (like opening a search page, running apps like WhatsApp and Messenger) after the high-speed cap gets over after 30 minutes.

Note: The network is dynamically adjusted in such a way that priority is given to those who are logging in for the first time. This is why the 30 minute high-speed cap exists. During our time at the Nizamuddin railway station we got average speeds of 17-18mpbs (download) during the 30 minute unfettered limit. Also, we found out that all access points are already dual-band (2.4GHz and 5GHz capable) in order to cope with future demand.

Q: What is the business model that Google and RailTel are following? How is Google benefiting from this project?

For Google, this is an ecosystem project. Our idea with this is to make sure there is more and more broadband adoption. The more the adoption, the more people come online, and the greater the economic impact.

When there is economic impact on digitisation, we get directly impacted because we are a stakeholder in the digitisation of the country. Also, the more people use internet, the more they use e-commerce, social networks, news websites and eventually Google services.

Q: At the Nizamuddin railway station and the New Delhi railway station, which I visited a few weeks ago, the advertising is quite minimal. Also a lot of people, even in tier 1 cities like Delhi and Mumbai are unaware of this initiative. So what is Google and RailTel's future plans regarding awareness?

Addressing awareness of Wi-Fi is certainly an important issue and we need the help of the Indian railways and the government to do that more and more. As you can see, the Wi-Fi is already free, so there is not much space for businesses to market on it. But the Indian Railways who host this, they should be partnering with us to make more and more awareness happen.

There are various channels of awareness. We have tried audio announcements and visuals. We have also tried having agents at the station. I think to raise awareness in a sustainable way we need help from the government.

Q: At the stations itself, the Google Wi-Fi hoardings are minimal and those which are present are very small. Any steps to rectify the same?

I think that is very good feedback. I think we need to do more. There is a lot of opportunity to do more. We have tried a few things, we have tried LED boards as you can see, we have tried beacons at the station to give alerts to people as they walk in that Wi-Fi is available here.