Why Pope Francis could be facing a Catholic schism 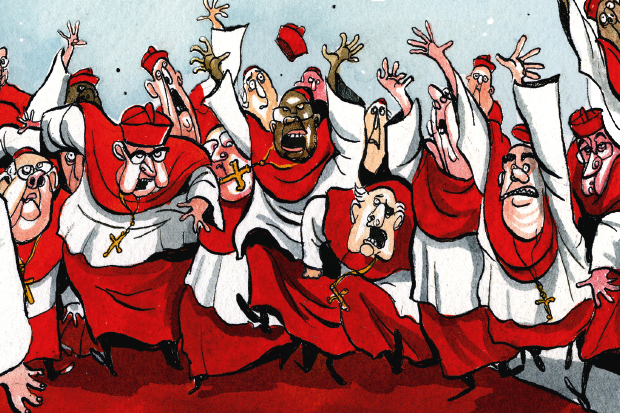 If the battle over communion for the remarried doesn’t die down, one side or the other may take drastic measures (Curtsy: The Spectator).

A scurrilous rumour recently swept Rome: the Pope had summoned the Vatican’s finance czar over his expenses. When Cardinal George Pell admitted spending more than £3,000 on a designer kitchen unit, Francis quipped: ‘What, is it made of solid gold?’

That never happened, of course, but the tittle-tattle served a purpose. The story appeared in an Italian magazine just as Francis was deciding how much power to give Cardinal Pell over the curial accounts. Influential figures wanted to keep their money away from the cardinal’s prying eyes. What better way than to present him as a rogue who demanded receipts for every cappuccino while shelling out on marble counter-tops?

Vatican politics haven’t been this unpleasant since the bleakest days of Benedict XVI’s reign, when a papal butler leaked stacks of sensitive letters to the press. As one veteran Catholic commentator put it, ‘The nasty is back.’ And it’s likely to get nastier still in the run-up to this year’s crunch synod of bishops in Rome. Catholic bloggers are talking about the ‘great division’.

In truth, ‘the nasty’ never really went away. Although Francis was elected two years ago with a mandate to overhaul the Curia, the Vatican bureaucracy looks much the same as when he arrived (with the exception of Cardinal Pell’s new Secretariat for the Economy). The threat of imminent redundancies has kept the Pope’s opponents on the back foot, but also lowered morale among loyal and diligent officials. When Francis addressed the Curia last December, no one expected him to bounce out like the former Microsoft boss Steve Ballmer, shouting, ‘I love this company!’ But many were taken aback when he accused workers of being gripped by 15 sicknesses of the soul, including ‘spiritual Alzheimer’s’ and ‘vainglory’. One news outlet summed up the speech with the headline: ‘Merry Christmas, you power-hungry hypocrites.’

The attempted character assassination of Cardinal Pell may have had a secondary motive. Pell played a formidable role at last October’s synod, the first of two dedicated to the subject of the family. Although the action took place behind closed doors, most observers believe the cardinal led a rebellion against organisers after they released a strikingly liberal interim report allegedly bearing little relation to synod discussions. According to one account, the cardinal ‘slammed his hand on the table and said, “You must stop manipulating this synod.”’ Cardinal Pell’s stand might have made him a marked man for supporters of the report’s daringly relaxed line on gay couples, divorce and remarriage.

It is hard to exaggerate the passions unleashed by the synod. Ronald Knox once said that ‘he who travels in the Barque of Peter had better not look too closely into the engine room’. During the synod the engine doors were flung open and the suffocating fumes hung over Rome. Some claimed the interim report was written before the synod began, others that organisers had intercepted books upholding traditional teaching on marriage. When a liberal German cardinal sounded off about African attitudes towards homosexuality, he was accused of being a racist and a Nazi. Francis seemed unfazed. He had opened the synod by asking participants to speak their minds. They had. So what was the problem? He had helped the cardinals to loosen up, to have a genuine debate, rather than the stilted exchanges of past synods. But some worried that the Church had loosened up so much it was about to fall apart. Those fears are growing as we head towards the second, decisive family synod in October. According to one English priest, the ‘S-word’ — schism — is being whispered around Rome.

Talk of an outright split would no doubt horrify Francis. But he seems happy to live with a degree of internal tension others would find unbearable. One of his favourite sayings is ‘¡Hagan lío!’ — Spanish for ‘make some noise’ or ‘stir things up’. That was his advice to Argentine youngsters not long after his election, but it could also be his episcopal motto. Yes, he’s an austere, saintly figure who rises at 4.30 a.m. to pray. But he’s also a mischief maker. As a young priest, he soothed relatives’ crying babies with dummies dipped in whisky and taught swear-words to his godson. As Pope, he has joked about kicking officials ‘where the sun doesn’t shine’ and playfully suggested that his pontificate may be over in a few years.

But Francis may be wondering if he acted prudently when he invited Cardinal Walter Kasper to set the scene for the first family synod. The German theologian delivered a provocative address advocating Communion for the remarried. That may sound trifling to outsiders. But plenty of Catholics believe it would undermine a fundamental Church teaching: that the bond of marriage cannot be broken. Before Cardinal Kasper’s address, most cardinals thought the matter was settled. Suddenly it was up for grabs.

How likely is schism? Consider this: the majority of bishops in Germany support the change. But over the border, the Polish episcopate has implied that it could never be accepted. That makes consensus at the synod highly unlikely. Francis will then have a tricky decision. If he permits Communion for the remarried, he will face uproar in the Catholic powerhouse of Poland (and elsewhere). If he rejects it, he will alienate the eyewateringly rich German Church.

In any case, the Germans have hinted they may go it alone if the synod doesn’t end well for them. ‘We are not just a subsidiary of Rome,’ their leader, Cardinal Reinhard Marx, said recently. ‘We cannot wait until a synod states something, as we have to carry out marriage and family ministry here.’ If Germany breaks away, Francis will have to bring it back in line or risk looking weak. Is there a third way? Perhaps the Pope could create a commission to consider the theological arguments away from the synod’s pressure-cooker atmosphere. But there’s an unhappy precedent: the Pontifical Commission on Birth Control. A majority of commission members said the Church could tolerate contraception, creating huge expectations of change, which Paul VI then dashed in his 1968 encyclical Humanae Vitae. So that route might make the Communion issue more, not less divisive.

Although Francis has never explicitly endorsed Communion for the remarried, many believe he views it as a legitimate ‘development of tradition’, rather than a break with two millennia of doctrine. That’s why the autumn synod will be seen as a referendum on his pontificate. If participants reject the Communion proposal, it’s likely to be presented as a crushing papal defeat. The media invariably describe the resistance to Francis as ‘conservative’. But it’s more complicated than that. Traditionalists think Francis shows too little respect for the Church’s liturgical and theological heritage. Economic conservatives slap their foreheads whenever the Pope denounces the ‘tyranny’ of unbridled capitalism. Yet doctrinal conservatives are the ones having palpitations ahead of the synod. This last group is the largest and the most in need of papal reassurance. These parties are by no means uniformly hostile towards the Pope. Traditionalists applaud Francis for his defence of old-school Catholic social doctrine, while doctrinal conservatives are firmly behind the papal drive to clean up Vatican finances. The liberal Catholic resistance to Francis, meanwhile, is rarely acknowledged. There are feminists who regard the Pope as a patriarchal dinosaur, and doctrinal liberals who berate him for merely changing the tone not the substance of Church teaching on sexual morality.

But if we focus exclusively on the resistance, we miss the bigger picture. The truth is that Francis remains astoundingly popular. Earlier this year he celebrated the largest Mass in human history in the Philippines. The Pew Research Center suggested that two thirds of the world’s population like him. His popularity among Catholics in America, a nation he will visit for the first time in September, has just risen from 84 to 90 per cent. The Pope’s countless admirers would regard the idea that he is weakening — or even splitting — the Church as bizarre.

Meanwhile, there may be a simple way for Francis to unite Catholicism’s competing factions. He could make this year’s synod much more transparent than last, eliminating suspicions of manipulation by publishing the bishops’ speeches. He could then focus relentlessly on two things that every shade of Catholic can get behind: spreading the Gospel and caring for the poor. Happily, he already offers electrifying leadership in both areas. When the Pope visited Naples Cathedral last month, the blood of the city’s patron saint, Januarius, partially liquefied. It was, reporters joked, a half-miracle. Perhaps the other half will be if Francis can steer the Catholic Church through the coming storm without mishap.