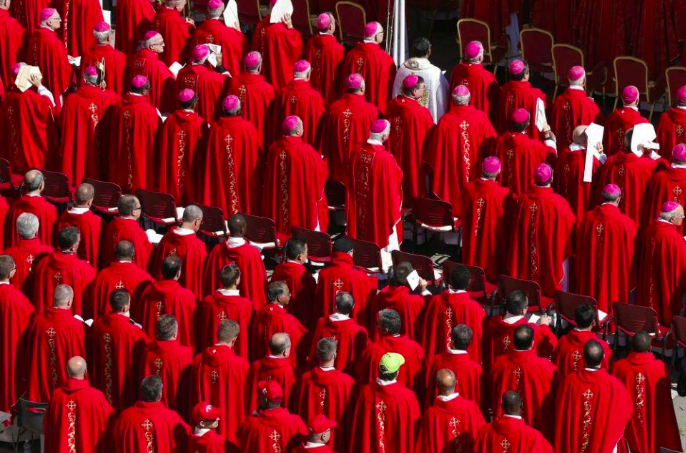 Jesus emptied himself to become an ordinary human with small ‘o’ to serve and wash their feet, unlike our bishops, with capital ‘O’ Ordinaries to rule over; Francis who calls himself a “sinner” placed himself one step below the ordinary Laity in the hierarchical pyramid, to deserve the title: ”Servant of Servants!” I opt to write my name, all in lower case. Become an ‘ordinary’ in the ordinary humans in the Cattle Class of Jesus!

In the face of all the thunder and lightning, fire and fury,  brimstones and grim signals raining from heaven on the Church in India and the sheep bleating, braying, revolting and running directionless, what would you do right now? The episcopal assembly in the above picture is the visible reality of the high priestly class in their royal regalia and finery “wearing broader phylacteries and longer tassels…front seats in synagogues…everything to attract attention.” Mt.23

Ezekiel 34, is the hit message for the crises church faces now as i see it: “Woe to the shepherds of Israel who have been pasturing themselves! Should not shepherds, rather, pasture sheep?

“You have fed off their milk, worn their wool, and slaughtered the fatlings, but the sheep you have not pastured. You did not strengthen the weak nor heal the sick nor bind up the injured.You did not bring back the strayed nor seek the lost,but you lorded it over them harshly and brutally.

“… because my shepherds did not look after my sheep, but pastured themselves and did not pasture my sheep; because of this, shepherds, hear the word of the Lord:Thus says the Lord God: I swear I am coming against these shepherds.

There are any number of similar passages in the gospels: The last judgement sending the wicked off to hell; the unjust servants of the vineyard thrown into prison, Jesus’ command to cut off the hands or eyes that cause damnation to save the rest of the body,  and more.

Jesus is sweet and bitter

Yes the one whom you and I define as “Sweet Jesus meek and mild”, is also, “Bitter Jesus rough, rude and wild.” He did not hesitate one bit to take up cudgels, the whip to chase out the high priests of his time, for making his house into a den of thieves and looters. He did it also by over turning their money collection tables, unleashing physical violence.

Before doing that he had advised them, warned them time and again and finally unleashed the world famous unparalleled biting, piercing list of woes calling the high priests of his times “Hypocrites, white washed sepulchers, brood of vipers…”

You can read the whole of His fury in Chapter 23 of Mathew, the whole of it, a litany of ‘Woes’. It is in fact the living picture of the Hierarchical priestly class in India today. All the WOES that Jesus wanted to befall on the corrupt priestly class of his times must fall on the episcopal hierarchical class of India parading itself like peacock in external splendour of royal dress and sumptuous comfortable living.

Only followers of the teachings of Jesus and imitators of his simple, humble life style of the ordinary hard working and sweating people can be his followers. The bishops sign themselves “Ordinaries” with the capital “O” meaning they are extraordinaries.

No, there are no ordinaries and extraordinaries among his followers, all equals only. That is why he told them: “You should not call any one, Rabbi, Father, Master or Teacher. You all brothers only.” Yet what is happening among the so-called laity, even the vehement critics among them of the priestly class?

They continue braying like donkeys or bleating like sheep: “Fr. (Most Rev. Rt.Rev. Very Rev. Rev.) Your Excellency, Your Grace, Your Eminence etc. When will the lay folk learn to stop calling them titles, explicitly forbidden by Jesus, to start with?

You have to become the CHANGE you wish to see happening in Church and society. So stop first calling the priestly class such stupid, idiotic appellations strictly forbidden by Jesus, if you claim to be followers of Jesus and not of the hierarchy who invented these titles to lord over you.

What I did or do!

So what I would do or was doing in the past? I was  pleading with authorities, our bishops, through articles sent to them regularly with no acknowledgment even from any of them, how they can or should act. I have been doing it, though they don’t even respond. If they fail to act, even to respond, one has to cut off oneself (myself) from the incomunicables  or wrong doers. What else should he do? I still continue to send, since I have to love even my enemies.  None of them I consider as my enemies, but only as friends, at worst as incorrigible friends.

That is what I have done by becoming one of the CATTLE CLASS of the Nazarene on the dusty roads of the lowly placed and exploited, after cutting off myself totally with any of the comfortable class of “silent”(that is their hallmark) divided churches and Organized (disorganized is the better word) religions!

If the Lord (He is more my friend in need than Lord) does not support me walking on wobbling waters, I am ready to go down to the bottom, like a lead. I have done it several times before,  but always his unknown, unseen hand held me up over all  drowning waters.

Those who love the truth (Sathyagrahies) will come to light, and those who love good  (God for others), everything will turn out for their own good; are the lessons I have learned in life.That gives me strength to walk on stormy waters and move forward! There is no reason why others who tread similar path need not get same or more  strength and succeed!