Who will guard our guards? Should even justice become theatre? 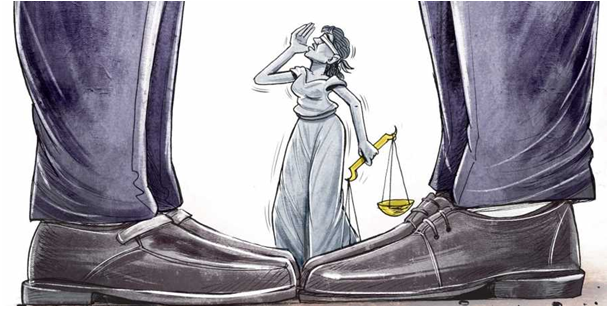 Note: Will any mature person called to give an opinion give instant unqualified support to the person who called, without taking time to study and deliberate on the issue? What is most important is that justice must appear to be done for the common man.

This is what struck this scribe as soon as this story broke for public consumption. Crime is said to be the bread and butter for lawyers and judges. So as far as I am concerned, I avoid lawyers, advocates and doctors.

Here the question is not whether the CJI is guilty or not. I too had the best of opinion about his person until he took the initiative to defend himself, since no one is a judge in one’s own case. We are used to dishonest persons everywhere including the Judiciary. But we all wish to think that we are making progress in politics and judiciary, not going back to life in the jungles.

Who will Guard the Guards?

I have not been able to join any political party in my over 80 years of life, as I have not found any honest and service minded parties. Of course there are service minded politicians and I vote for them irrespective of their party affiliation. Similar is my assessment of lawyers and judges.

Judges, lawyers, ministers, politicians are expected to be guardians and protectors of the people. If they turn to be villains we can only ask in wonder, “Who will guard the guards themselves?” or ask “What to do with the fence that swallos the crop?” Read the analysis of Abraham Mathews below and draw your own conclusions. james kottoor, editor CCV.

Abraham on CJI in Case!

The hastily called Special Bench hearing at the Supreme Court was presided over by none other than the Chief Justice of India (CJI). Allegations of impropriety against the CJI had been doing the rounds.

At the hearing, the judges seemed to characterise the allegations as an assault on the independence of the judiciary. The government’s lawyers sided with the CJI. So did the Supreme Court Bar Association, represented by its president, as well as several other lawyers, none of whom were parties to the case.

Prashant Bhushan, appearing for the party whose case the court was supposedly hearing, walked out after about 40 minutes, claiming he was not even allowed to make his submissions. However, the judges did not gag the media from reporting, with Justice Arun Mishra, who was on the Bench, saying “restraint is our power”.

This is a summary of the events of 10 November 2017, when the-then Chief Justice, Dipak Misra, was facing allegations in what is known as the Medical College Bribery scandal. If that sounds eerily similar to the events of last Saturday, it only goes to show how multiple constitutional offices have now become a law unto themselves.

The allegations against the Chief Justice may be true, or an utter concoction. That is for an independent and impartial investigation to find. However, the impulse of constitutional authorities to dismiss the allegations raises many uncomfortable questions.

While on paper, the Chief Justice is only the first among equals, in practice, his role as ‘Master of the Roster’—the power to allot cases to different benches, which also includes the selection of judges to hear a particular case—makes him uniquely powerful. What compounds this power is that it is absolutely discretionary: Nobody can overrule him, as the four judges who held the press conference last year found out, judicially or otherwise.

This then leads to other privileges—the press is doubly cautious (as it should be) while questioning the higher judiciary—more out of respect for the institution, but also the fear of being found guilty of contempt, without chance of an appeal. Similarly, the CJI has a disproportionate say in the appointment of judges.

Recall the events this January that led to the rejection of judges whose elevation to the Supreme Court had already been approved by the Collegium. Now you could argue that this is akin to the powers of the head of the executive, except that government decisions are routinely overturned on grounds of unconstitutionality, including arbitrariness, by courts—an effective check.

Now to be sure, at least some of these powers are necessary for, and even worthy of, the office the Chief Justice holds. However, the risks of concentrating unfettered power in an individual shows us why we need to rethink judicial accountability.The role of the attorney general and the solicitor general also needs deliberation. Saturday’s Special Bench was ostensibly constituted by the Chief Justice upon the request of the solicitor general. Would such a request have not carried an implication of support? What then does that do to the balance of power between the government and the judiciary?

None of the people who vouched for the CJI’s innocence (and he well may be innocent) were in a position to know about, or had the opportunity to investigate, the veracity of the claims. What does it do to the weight of the constitutional office they hold, to be handing out clean chits callously?

The finance minister is a politician, and can be expected to engage in political innuendo—the attorney general is not. Let’s also not forget the AG’s subtle threat that the publishing of the account was a violation of the POSH Act, coming not far after the threat to invoke the Official Secrets Act against a newspaper in the Rafale case.

Thirdly, what about the heads of lawyer bodies who rushed to the CJI’s defence? Do they realise that their stance is to be reflective of their constituents? Do they really think the lawyer community finds sexual harassment a trivial matter to be sacrificed at the altar of judicial independence, which is often illusory anyway? What about the hundreds of women practising and working in the Supreme Court? What does this say about how well the system will stand up for them? And more importantly, what does this say about the fate of a woman refusing sexual advances from a powerful man?

And that brings us to the final point, which must be qualified with ‘if he is indeed guilty’. The present allegations are not a simple case of sexual advances rebuffed. What is egregious is the use of the institution, as well as law enforcement, to target the job security of not just the accuser, but also her family, as well as target them with criminal cases. If true, then the system is equally complicit.

One hopes that the allegations are indeed false. But it does the institution, or the society as a whole, no good to turn a blind eye to the reality of sexual assault (or corruption)—even by the most well-regarded of persons.